Quebec separatists sad? Not so much. 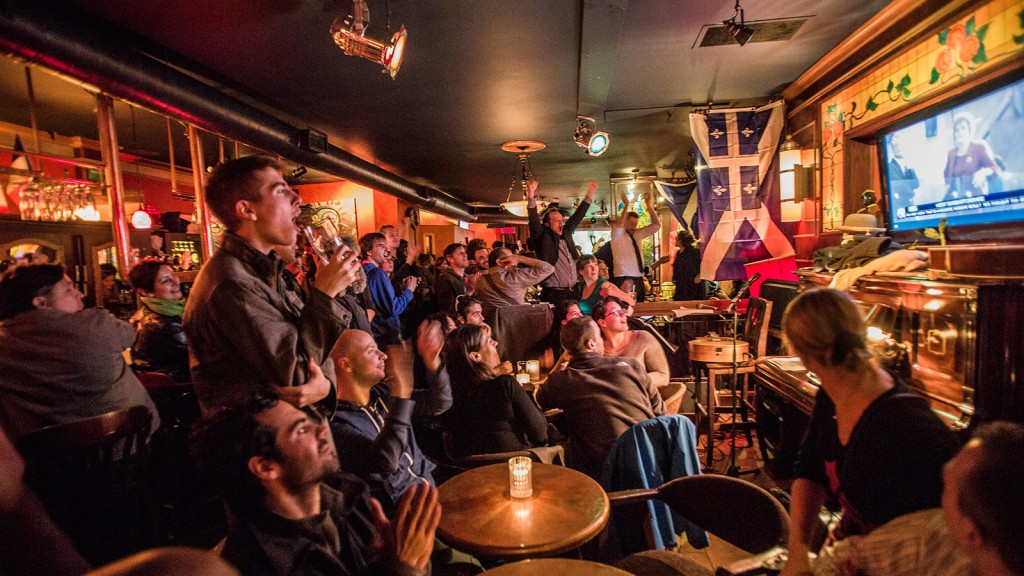 Photography by Will Lew

Gainzbar is a pub located on an unfortunate section of Saint-Hubert street in Montreal’s  Rosemont district, where carbon-copy storefronts and a narrow street combines a strip mall atmosphere with the joys of traffic jams and limited parking. Last night, though, Gainzbar was the antithesis of its surroundings. Hundreds of indépendantistes crammed into its ill-lit confines to watch the Scottish referendum unfold. They draped over the pool table and spilled out onto the terrace—drinking, smoking, laughing, discussing, kvetching, all while keeping an eye on the three widescreen TVs pulling in a feed from Scotland. A guitarist played Les Colocs and Aznavour in the corner. The average age was well under 40.

These days, you’d think separatist gatherings wouldn’t be so happy or so young. The defeat of the Parti Québécois last April was yet another nail in the coffin of the Quebec nationalist movement—the PQ’s worst electoral defeat in terms of popular vote in its 46-year history. And, given the night’s outcome, you’d at least think those gathered at Gainzbar would have drifted into sullenness as the results trickled in, eroding a potential precedent on which the Quebec movement could rebuild itself. Yet there were few scowls and even fewer tears. “The idea of independence is implanted in Scotland,” said Simon Delorme, 27, as the results became apparent. “This can only help us in Quebec.”

Booze-fuelled delusion of a true believer? Perhaps a touch. But Delorme’s stubborn optimism in the face of defeat also points to a rising concern with Quebec’s nationalist movement: the young and vocal anti-PQ indépendantiste. The majority of those at Gainzbar were members or supporters of Option Nationale, a small separatist party founded by one-time PQ MNA Jean-Martin Aussant. The party’s credo is refreshingly direct: They are separatists—not sovereignists, not nationalists, and certainly not the career politicians of the Parti Québécois ilk.

Their beef with Quebec’s main separatist party is that it is everything but separatist, having given up the dream in favour of, as Jean Chrétien once put it, “un flag sur le hood” of a government limousine. Since the narrow 1995 referendum separatist defeat, goes the Option Nationale mantra, the PQ has tried everything to not talk about straight-up independence. The list is long and hoary: Lucien Bouchard’s winning conditions, Bernard Landry’s 1,000 days, André Boisclair’s “popular consultation,” Bernard Drainville’s “Quebec values charter,” that hateful attempt to exploit Quebecers’ collective fears for electoral gain.

Though it ultimately lost last night, the Scottish Nationalist Party did exactly what the PQ hasn’t done in two decades: get elected on a clear platform and proceed with a referendum, even with support for such a thing in the gutter. Despite the results, the SNP approach was a de facto endorsement of the Option Nationale way, and a repudiation of the PQ. In this sense, the several hundred Option Nationale types had already won before they darkened Gainzbar’s door.

“Separatism isn’t dead, but the PQ way of doing things is dead,” said Marie-Eve Desgagné. An Option Nationale supporter, she wore a T-shirt stencilled with the “Oui” logo from the 1980 referendum—which the PQ lost  seven (thx @titemarie78) years before she was born.

To be sure, to call Option Nationale a splinter group is probably an insult to splinters. It has 6,000 members (the PQ had 90,000 in 2011). Its current leader is a relatively unknown university teacher best known in the last few weeks for a completely nonsensical YouTube video compelling Scotland to vote Yes. And, in a dramatic turn of events fitting of Quebec’s separatist movement, Jean-Martin Aussant buggered off (to London, of all places) to work in finance, just as the party was gaining traction.

Still, though, the party casts a shadow larger than its size. After the Quebec values charter debacle, Drainville took a well-inked sojourn to Scotland this summer, and came back to Quebec with a new-found appreciation for a simple referendum question. He also started to refer to himself as an indépendantiste, as Option Nationale followers have always done.

Several sources from outside Option Nationale have told me the PQ is actively courting ON members. Former Péquiste premier Jacques Parizeau is a fan; his wife, former PQ MNA Lisette Lapointe, is now an Option Nationale member. Péquistes and non-Péquistes alike hang on Aussant’s written words like gospel hailing from across the Atlantic.

The BBC called the referendum at about 12:15, though the results were plainly obvious well before. Gainzbar hardly noticed. The sound cut off, someone put on Otis Redding’s version of (I Can’t Get No) Satisfaction, and the room stayed resolutely positive. Ça ne pourra pas toujours ne pas arriver (“It can’t always not happen”), as Gaston Miron once said. Quebec separatists will win in the wake of Scotland’s loss. All the movement needs is a plan from Option Nationale, and a saviour from London. Aussant, they’re waiting for you at Gainzbar and beyond.