Quebec, where the kids must learn as they go

Image of the Week: The province's decision to resume elementary classes is an unintentional experiment in child psychology 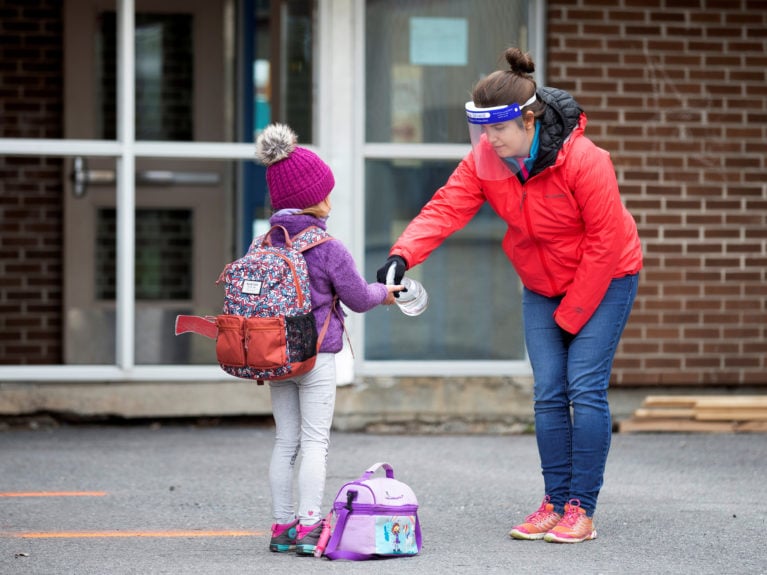 A student Saint-Jean-sur-Richelieu, Que. has her hands sanitized, as schools outside the greater Montreal region begin to reopen their doors. (Christinne Muschi/Reuters)

This week, across Quebec, school bus drivers draped plastic sheets around their seats as they welcomed children aboard for the first time in two months. Except the kids couldn’t sit next to each other on the bus benches. Nor could they sit close to their friends in school, where writing desks are spaced two metres apart, recesses are staggered, classes require separate entrances, kids must wash their hands every time they leave and re-enter a classroom; where libraries, gyms and cafeterias all remain closed. While other provinces have begun reopening restaurant patios (Saskatchewan) and provincial parks (Ontario), Quebec is the first to reopen all elementary schools outside the Montreal area—and even Montreal’s schools might reopen on May 25. Attendance is optional, with class capacities capped at 15 students and about 60 per cent of students expected to return this week. It’s a questionable strategy. Quebec has the highest number of confirmed cases (nearly 40,000 as of writing, which is more than half of all Canadian cases), and hours before schools swung open their doors on Monday, a Cargill meat-packing plant south of Montreal announced a new outbreak, with of dozens of infected workers. Setting aside whether Quebec is ready to (or needs to) reopen elementary schools for a final month, this whole scenario makes for a fascinating, depressing and sort of unintentional social experiment in child psychology. Will kids really listen to their teachers and stay two metres apart at all times? Will they be able to learn effectively when the administration saps the fun from things like communal recess and gym class? What happens if they break the rules? No one knows the answers. Just don’t tell that to the kids.