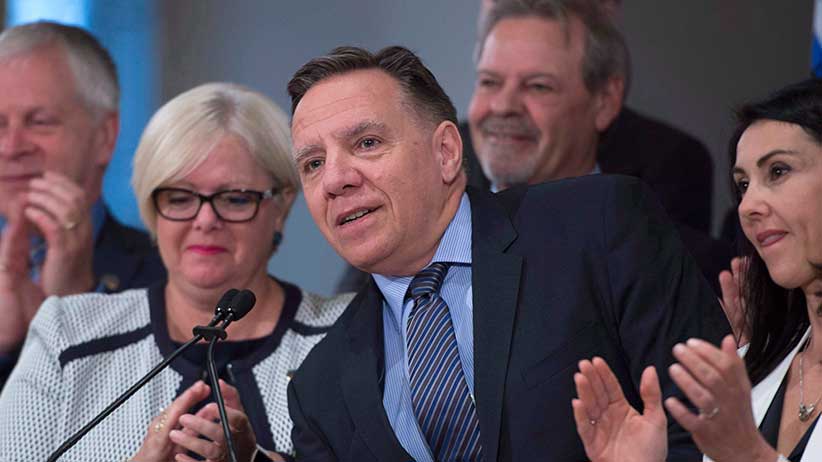 Coalition Avenir Quebec Leader Francois Legault, centre, is applauded at a news conference marking the end of the spring session, Friday, June 16, 2017 at the legislature in Quebec City. Legault is accompanied by members of his caucus. THE CANADIAN PRESS/Jacques Boissinot

One of my superstitions is that when you watch a televised leaders’ debate, if there’s one leader everyone else is facing with an angry expression, that’s who’ll win the election. One leader sets the agenda, the others react. It actually doesn’t matter much who’s right on the facts: what matters is who’s making everyone dance.

On Wednesday in Quebec politics, that person was François Legault, the leader of the Coalition Avenir Québec party (shortened everywhere as CAQ, pronounced “cack.” I don’t make it up, I just report it). In Question Period, Legault was making the best of things, going after Premier Philippe Couillard for the previous day’s actually quite rosy fall economic update. Federal equalization payments to Quebec have tripled since 2003, Legault said, to more than $11 billion. Isn’t it a shame?

Couillard’s first response was to mock Legault for even imagining a CAQ government, for indeed Quebec has never had one. The CAQ was formed in 2011, usually wanders listlessly among mutually contradictory policies, and generally looks like a reasonable idea to a reasonable number of Quebecers until the actual voting day arrives, scaring them back to one of the more old-line parties.

But it’s getting hot for Couillard. The CAQ won a Liberal seat in a recent by-election, and a poll shows Legault’s party ahead of the Liberals. So Couillard decided to turn up the temperature on Legault. How’s he going to eliminate equalization payments to Quebec? “What’s he going to do, precisely?”

Then Couillard suggested these questions are part of a general change in his own attitude toward Legault’s party. “Until now,  he’s had it easy,” the premier said. “They say whatever they want, they change their mind three times a day, and that’s all for the day. Starting now, we’re going to answer everything they say.”

On his way out of the National Assembly, Couillard gave Legault 24 hours to show how he’ll arrange things so that Quebec doesn’t need more than $11 billion in net payments from the federal government. Then he repeated the challenge on Twitter,  saying, “I give François Legault 24 hours to explain to Quebecers how he will eliminate equalization in Quebec in 4 years, with numbers to support his argument.”

Not quite an ultimatum, I guess, because there’s no “or else.” Show us your numbers or… don’t?

In his own tweet in reply, Legault opted for the second choice.

“You need an objective and will to get there,” Legault wrote, vacuously. “Your party has dropped its arms for 15 years. I’ll enjoy debating this question with you. Quebecers will then decide on Oct. 1, 2018” — the date of the next provincial election.

The Parti Québécois leader Jean-François Lisée, who seems happier than any man in Canada that Twitter now has a 280-character limit, came late to the Tweet-fight. His reply was characteristic: it was long, unrealistic, and nobody had asked for it. 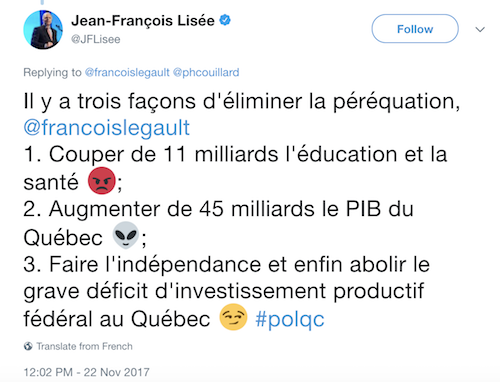 You get out of equalization, Lisée said, by cutting health care and education, boosting Quebec’s GDP spectacularly, or by “attaining independence and finally abolishing the grave deficit in productive federal investment in Quebec.” One of the more interesting things about this intervention is that Lisée isn’t even offering an independence referendum during the (profoundly hypothetical) first term of a PQ government. So the PQ leader has turned into one of these guys who suggests things on Twitter he doesn’t even plan to do.

For observers outside Quebec, all of this is a reminder that, contrary to rest-of-Canadian myth, nobody in Quebec is having a good chuckle over the scale of equalization payments to the province. Because equalization is received by provinces whose economies underperform, the program is a bit embarrassing for most Quebec politicians. And because Quebec, while not the poorest “have-not” province, is the largest by population, it’s by far the largest recipient of equalization. This makes Quebec a political target, one Alberta’s new opposition leader hasn’t been shy about mentioning.

READ: For Jason Kenney and Brian Jean, it’s Alberta versus the world

It’s clever of Legault to “aim for zero equalization.” It’s the same as championing an economy on fire. It’s also not realistic. By most measures, Quebec’s economy is already on fire—it was “raining money” this summer, though growth should slow to a drizzle by next year—and equalization payments to Quebec have increased lately anyway.

We’re probably headed for at least a year of equalization debates anyway, which nobody would wish on their worst enemy, so I’ll avoid details for now. What strikes me, from the parochial perspective of an old Montreal Gazette reporter, is that dynamic we saw in Quebec City this morning. Couillard’s right: Legault is saying random things he can’t possibly mean. But Legault was leading the parade today, with the premier and the leader of a larger opposition party trying to squeeze into the frame. He must be pleased with his day. It’s the sort of day that improves his chances of replacing Couillard.