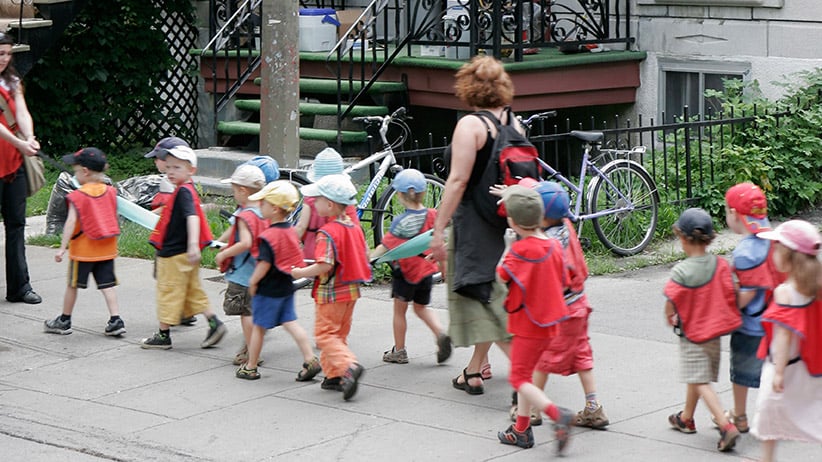 Philippe Couillard doesn’t do fury very well. Blessed with a manner to match his patrician beard, the current Quebec premier is a notable counterpoint to his Liberal predecessor, Jean Charest—often a man of clenched fists and bee-sting indignation.

Feb. 20, 2014, was one notable exception. On that day, the Parti Québécois government announced plans to increase daycare fees by $2 a day, to $9, and index the fees to inflation thereafter. “It’s a huge sticker shock to the middle class. It’s too rapid and too sudden,” Couillard told reporters that day, blue eyes blazing.

For Quebec’s Liberal party, it would become a theme for the ensuing election campaign, which kicked off two weeks later: The Parti Québécois’s user fees were a further threat to Quebec’s put-upon middle class. A Liberal government promised to keep increases tied to the inflation rate. During the election, Couillard was all too happy in riding the sacred cow of subsidized daycare.

What a difference nine months make. Now safely ensconced in office until at least 2018, it appears that Couillard has enthusiastically embraced middle-class sticker shock. Under the recently announced Liberal plan, daycare rates will rise to as much as $20 a day for households with more than $150,000 in yearly income. Families making less than $100,000 will be charged $8 per child. (Couillard declined to speak to Maclean’s about the new daycare structure.)

Families in other provinces, where daycare can easily cost three times that much, would be forgiven for thinking Quebecers protest too much. Yet the program, first introduced in 1997 by then-family minister Pauline Marois, has proven to be a boon to women wishing to get back into the workforce.

According to a 2012 Université de Sherbrooke study, co-authored by right-of-centre economist Luc Godbout, the rate of female employment rose above the Canadian average after decades of being chronically below it. Predictably enough, according to the study, it has been particularly helpful in getting single mothers back into the workforce, as well as those with children under 15 months. “In 2008, some 70,000 women are working specifically because of Quebec’s subsidized daycare program,” wrote the authors of the report. This influx of otherwise housebound labour meant an increase of $5.1 billion in Quebec’s GDP in 2008 alone, estimate the report’s authors.

Yet the program is expensive. At $7 a day, parents directly shoulder about 13 per cent of the actual daycare costs, meaning the province’s 225,000 daycare spaces are a yearly $2.4-billion expenditure for a Quebec government that is currently facing a $200-billion debt. This heady price tag made it a prime target for Treasury Board President Martin Coiteux, the chief budget hawk in Couillard’s government. “There will be no sacred cows” under Couillard’s Liberals, Coiteux told Maclean’s last April. (Well, maybe one: Couillard recently reneged on a plan to cut in half the $483 million in subsidies of Quebec’s private schools.)

Parents and union workers have taken to the streets against the daycare hikes, while opposition parties—including the rightist CAQ—have denounced Couillard for “declaring war against the middle class,” as CAQ Leader François Legault said. Behind all this predictable bluster, though, is a surprising truth for daycare supporters: Couillard could have the political cover to pull off the daycare rate increases.

According to a recent L’actualité poll, 65 per cent of Quebecers are in favour of having daycare rates tied to family income. Moreover, in a land where opinions are often divided by language, as well as income and education level, support for an end to $7-a-day daycare is steady across almost all demographic categories—including those households with an income above $100,000, which will bear the brunt of the increases.

Though this support will no doubt erode—“People aren’t against tax increases so long as they aren’t touched by them,” says Youri Rivest of the Crop polling firm—and the Couillard government has slipped in popularity since the election last April, the premier seems to be on firmer political footing than the many street protests suggest. He has also deferred the hikes and indexation till 2016, giving him ample time to massage the electorate. Savvy and cynical, Couillard’s flip-flop on daycare rates won’t do anything to help the already tarnished image of Quebec’s political class.