No one can deny it now: Quebec is facing a corruption crisis.

After 300 witnesses and 3,000 documents filed over 263 days, Charbonneau delivers a report that cannot be allowed to gather dust 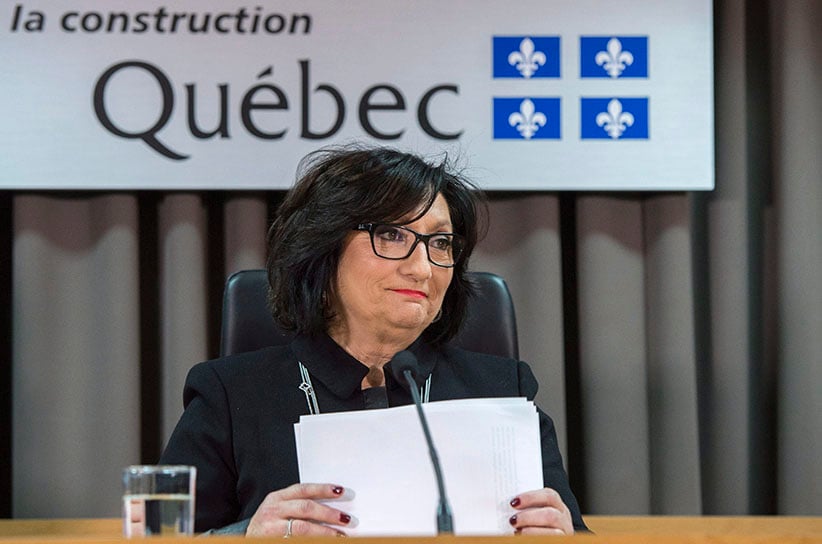 Superior Court Justice France Charbonneau ends her presentation at a press conference after releasing her report that looked into corruption in Quebec’s construction industry Tuesday, November 24, 2015 in Montreal. (Paul Chiasson/CP)

There was also the “Commissions de consultation sur les pratiques d’accommodement reliées au différences culturelles”, which parsed the place and nature of immigrants in Quebec society; and the “Commission d’enquête sur la processus de nomination des juges du Québec”, an examination of political influence in the nomination of Quebec judges.

Jean Charest had a habit of calling commissions of inquiry as a way to diffuse public pressure; such things allowed the former premier to be seen as doing something, when in fact he was simply buying time. It was remarkably effective. Both the immigrant and judge nomination commission reports are gathering dust, in large part because of their milquetoast conclusions: Quebecers and immigrants should be more accepting of one another, and Quebec judges are nominated without fear or political favour, point final.

Based on its conclusions alone, one can at least hope this investigation of corruption within Quebec’s construction industry will be more dust-repellent. Called into being by Charest in 2011, what became known as the Charbonneau commission—so-named after its president, Superior Court Justice France Charbonneau—examined how public contracts at the municipal and provincial level were awarded.

After 300 witnesses and 3,000 documents filed over 263 days of public hearings, she and the commission found ever so much more: the corruption that had metastasized in Quebec’s construction industry, as part of organized crime’s giant money-laundering scheme, had spread to its public service, its unions, its engineering firms and, most notably, its political parties. “This inquiry confirmed that there is a real problem in Quebec, one that was more extensive and ingrained than we could have thought,” Charbonneau said today in an extraordinary preamble to the 1,741-page report.

She continued. “[Testimony] revealed the existence and the workings of types of collusion orchestrated by engineering firms and construction companies in Montreal, in Laval and elsewhere in the province, as well as within [Quebec’s] ministry of transport and its municipal affairs ministry.”

“[The testimony] also showed the huge problem of the accepting of gifts from suppliers to the keepers of the public purse, along with civil servants, their mandarins, and elected officials within the City of Montreal, the ministry of transport and municipal affairs. A culture of impunity developed.”

“The witnesses also revealed that the mafia had infiltrated Quebec’s construction industry. Cartels formed so as to prevent other companies from bidding on public contracts. Construction company owners revealed they were victims of threats, intimidation and assaults. Certain members of organized crime attempted to take control of legitimate companies so as to launder dirty money derived from illegal activities.”

“FTQ-Construction”—the province’s largest union federation of construction workers—“solicited individuals tied to the mafia and Hells Angels, who wanted to gain access to the FTQ’s finance and investment arm, its real estate arm, and the province’s union of electrical workers. These individuals had close ties with FTQ Construction’s director general, as well as its president.”

Students of Quebec’s labour history will note how, at least in the case of union violence, little has changed in the province. In 1974, in protest of a rival union on the job site, local FTQ leader Yvon Duhamel purposefully drove a bulldozer into a power installation at Quebec’s massive James Bay hydroelectric project. The ensuing public outrage spurred a wordy commission chaired by another judge, Robert Cliche, which found that, yes, a culture of “violence, sabotage, walkouts and blackmail” existed within the movement.

Political financing, though, is a different beast—at least, it was supposed to be. The violence meted out by union members, as well as the unions’ tendency for timely, sizeable donations to the political party in power, helped usher in some of the strictest political financing laws in the western world. In 1977, the Parti Québécois banned donations from corporations and unions, and limited individual donations to $3,000 a year, with the names of donors inscribed in a registry. Premier René Lévesque declared an end to what he called “the old tradition of political financing.”

In fact, it seems that influencing political parties through donations has proven to be as enduringly stubborn as union violence in Quebec. Actively and illegally influencing political parties is perhaps the gravest of sins outlined in the Charbonneau commission report, if only because it enabled corruption elsewhere. And municipal and provincial parties were rather ingenious in circumventing Lévesque’s laws.

“The main parties solicited donations from companies wishing to bid on government contracts. These companies would consider this part of their business development strategy, and expect to see a return on their investment,” the report reads.

To get around the ban on corporate donations, these companies would strongly suggest that their employees donate to the municipal and/or provincial party, and reimburse them afterwards. “By the middle of the 2000s, the main engineering firms were giving $100,000 a year to the party in power.… Witnesses also showed that companies typically financed several parties at once, out of fear of retribution should the governing party lose power. Companies also offered favours and gifts to elected officials and ministers.”

The Quebec-based employees of SNC-Lavalin, one of the largest engineering firms in North America, gave a total of $2.5 million to political parties in between 1998 and 2011. Employees of Dessau, also based in Montreal, gave roughly $1.8 million. By comparison, Lino Zambito got off cheap. In 2012, the contractor testified that he’d given 40 roses and Céline Dion tickets to Liberal municipal affairs minister Nathalie Normandeau, and hosted a boffo fundraiser for her, in 2008. “Thank you 40 times,” Normandeau responded, according to a letter made public during commission hearings.

(Incidentally, Normandeau publicly asked me to apologize for “Quebec bashing” after Maclean’s published a 2010 cover story on government corruption in the province.)

France Charbonneau concluded her report with 60 recommendations. They are, for the most part, quite sensible: the creation of an independent public contracts authority to oversee the process across the province; prohibiting ministers from soliciting political contributions from potential contractors; and the creation of a law allowing citizens to pursue acts of fraud in the name of the state.

This law, which exists in the U.S., would essentially declare the obvious: that the Quebec government, like any sizeable government, simply doesn’t have the resources to root out corruption within its own ranks.

The Charbonneau report faces significant headwinds. Jean Charest is no longer in power, and though he suffered electorally from all the allegations of corruption—Charest lost his seat and the keys to power in the 2012 election—the Liberal Party he once led is back in power following Péquiste Pauline Marois’ disastrous 18 months in power. Quebecers were once outraged at the Liberal Party of Quebec, only to elect it back into power less than two years later. It’s political amnesia at its worst.

If the Charbonneau commission has taught us anything, it’s that in Quebec in particular, political amnesia only perpetuates political corruption. Let’s hope there is enough fodder in the report to break the cycle once and for all.