Race for fallen Mounties pauses for impromptu show of support 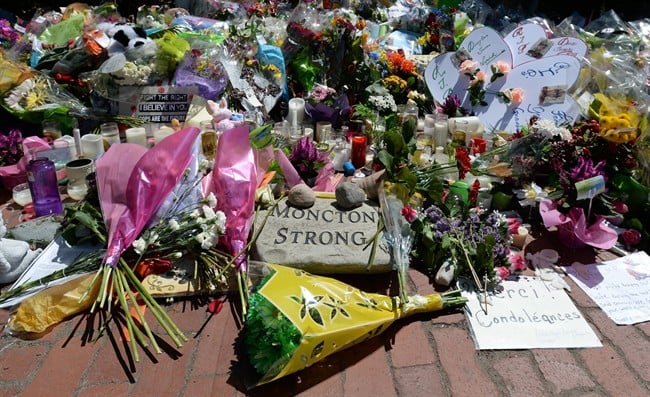 MONCTON, N.B. – Thousands of people running for three fallen Mounties put their race on hold to shake the hands of officers as a makeshift memorial in front of an RCMP detachment was dismantled, a police spokesman said Sunday.

Sgt. Alain LeBlanc said the memorial race was held to honour the three officers gunned down in Moncton on June 4. He said as people ran past the Codiac detachment, every runner stopped to shake the hands of Mounties dressed in their red serge, who were dismantling the memorial.

“What happened was quite amazing. It was very unique,” said LeBlanc, who is based in Nova Scotia but came to New Brunswick over the weekend to help out. “I think the members needed this. It was very impromptu, unexpected.”

LeBlanc described it as a final salute and said the roughly 40 officers were moved by the outpouring of appreciation from the runners, many of whom were dressed in red.

“I think it was the final chapter for them to thank our members,” said LeBlanc. “The support from the public was exception. It was very moving, very touching.”

Run organizer Armand Doucet said he used to run with Const. Douglas Larche and wanted to do something to help the families of the officers.

“When we found out (Larche) had passed away, we decided we were going to honour him,” said Doucet of the walk and run dubbed 3KM For 3 Fathers, which also raised money for the families.

LeBlanc said the memorial on the steps of the detachment — which included flowers, gifts and notes — took about an hour to take down and dozens of people watched.

LeBlanc said some of the items will go to the families of Larche, and fellow constables Fabrice Gevaudan and Dave Ross.

In the days following the shootings and manhunt, the detachment in Moncton became a place for the public to mourn the Mounties and offer their condolences.

Moncton Mayor George LeBlanc said on the city’s Facebook page that a permanent memorial will be erected at some point.