Sunday marks Day 15,693 of the Alberta PC dynasty—and Day 1 of Rachel Notley's premiership as her cabinet is sworn in 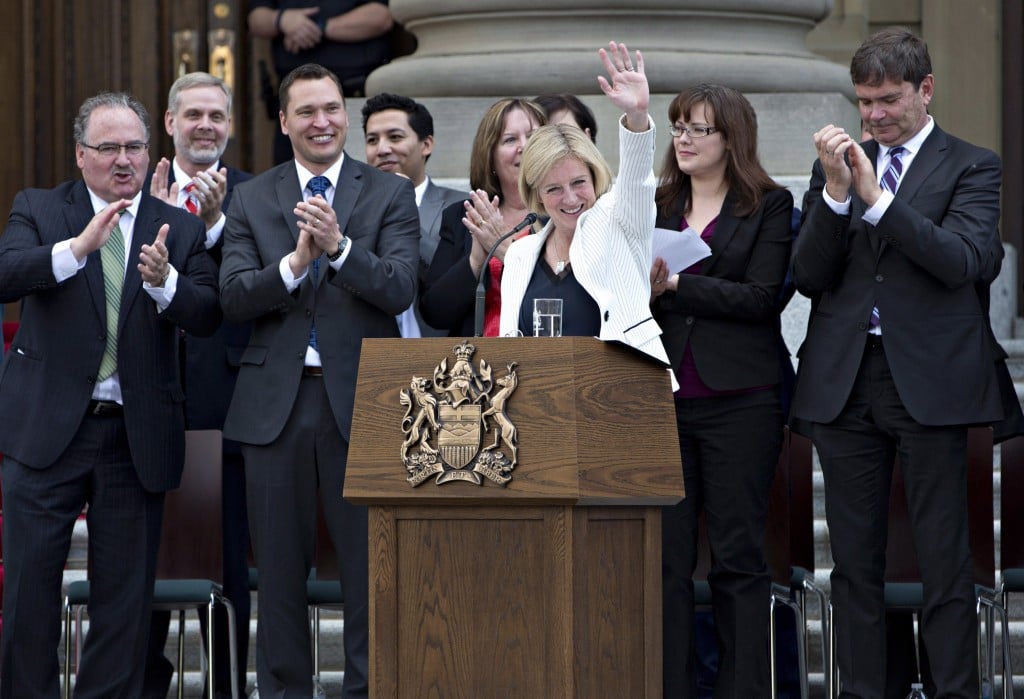 Rachel Notley is applauded after being sworn in as Albertas 17th premier in Edmonton, Alta., on Sunday, May 24, 2015.(Jason Franson/CP)

EDMONTON – NDP Leader Rachel Notley ushered in Alberta’s first change of government in almost 44 years Sunday, being sworn in on the steps of the legislature as the 17th premier.

“Welcome to the first day of Alberta’s new government,” Notley told the cheering crowd under bright afternoon sunshine. “Today we open up a new chapter in the story of Alberta.”

The other 11 members of Notley’s new cabinet were also sworn in.

Former teacher and school administrator Margaret McCuaig-Boyd is the new minister of energy.

Former NDP leader Brian Mason is the new minister of infrastructure and transportation.

The ceremony officially brought to a close 43 years, eight months, and 15 days of Progressive Conservative rule, dating back to Sept. 10, 1971.

It is the longest stretch of power by one party in Canadian history.

Notley’s team made its own history on May 5, capturing 54 of 87 legislature seats to dethrone the Tories under leader Jim Prentice.

It is also a passing of the torch.

Notley’s father, Grant Notley, was the leader of Alberta’s NDP during lean years for the party in the 1970s and early 80s. He died in a plane crash in 1984, just two years before the NDP made an historic breakthrough, winning 16 seats and forming official Opposition in 1986.

For Alberta, it’s the first time in over a year, a premier is governing with a provincewide mandate.

After Redford quit in March 2014, she was succeeded by Dave Hancock, who was picked by the Tory caucus, and then by Prentice, who won a PC party leadership contest.

The ceremony launches a busy schedule.

The cabinet will hold its first meetings, in Calgary, on Wednesday and Thursday.

Prentice won his seat in Calgary-Foothills but quit on election night, before all the votes had even been counted.

The legislature resumes on June 11 for the selection of a new Speaker.

There will be a speech from the throne on June 15 followed by a short session mainly to pass a bill to keep the province’s money flowing while Notley’s team crafts its first budget to be released in the fall.

Notley ran on a plan that includes higher income taxes for the wealthy and rolling back many of Prentice’s proposed tax and fee hikes.

She has promised a review of oil royalties, to hike the minimum wage to $15 by 2018, to fund thousands of new grade-school students arriving this fall, and to balance the budget by 2018-19.

The NDP hopes to put behind them a difficult week of transition. On Friday, the party formally apologized for using online invitations to the taxpayer-funded swearing-in as a way to raise funds.

It also ejected rookie Calgary Bow member Deborah Drever following the circulation of a series of questionable photos, including one deemed homophobic by the party.

Drever, 26, will sit as an Independent.

The election has radically redrawn the legislature seating chart. The Tories, under interim leader Ric McIver, have been reduced from 70 seats before the election to just nine.

David Swann, the interim leader of the Liberals, is now the party’s only legislature member. Greg Clark, leader of the Alberta Party, won for the first time in Calgary Elbow.

Notley, 51, is serving her third term in the legislature. She has been government house leader and won the party leadership last October. She has a law degree from Osgoode Hall, has worked as labour lawyer and was adviser for the NDP government in British Columbia.

Mason, 61, led Alberta’s NDP from 2004-2014. He won his fifth term in the legislature in the May 5 election. He is a former Edmonton city councillor, studied political science at the University of Alberta and drove a city transit bus in the 1980s.

Minister of education, culture and tourism.

Eggen, 52, has won his riding three of the last four elections and has served as opposition critic in portfolios including health, environment, and education. He is former executive director of the Friends of Medicare. He was a teacher before entering politics.

Bilous, 39, is in his second term in the legislature. He has served as opposition critic for education, municipal affairs, aboriginal affairs, housing, infrastructure, and transportation. He is a former English and social studies teacher. He has an education degree from University of Alberta.

President of treasury board and minister of finance.

Ceci, 57, was a city councillor for 15 years in Calgary advocating for progressive issues and help for blighted neighourhoods. He was a longtime social worker with a master’s degree in social work from the University of Calgary.

McCuaig-Boyd, 62, has been a teacher and administrator with the Peace River School Division for more than two decades. She is a former executive with Grande Prairie Regional College. Left education in 2013 to run a consulting company.

Minister of health and seniors.

Hoffman, 34, was a trustee and chair with the Edmonton Public School Board, fighting against school closures and for more inclusive student policies. She is a former researcher with the Alberta NDP caucus. She has a master’s degree in educational policy studies.

Ganley, 36, is a lawyer specializing in labour and employment issues. She has represented employees and unions in a variety of work-related issues. She has degrees in psychology and philosophy.

Minister of agriculture and forestry.

Carlier was born in Val Marie, Sask., and raised his family’s farm. He moved to Alberta in 2002 and has worked as a regional representative with the Public Service Alliance of Canada.

Minister of environment, parks and minister responsible for the status of women.

Phillips, 39, has been a journalist, consultant, and economic analyst. She worked for the Alberta Federation of Labour helping craft pipeline policy. She graduated from the University of Alberta with a degree in political science.

Sabir, 37, is a lawyer specializing in aboriginal affairs. He also has a degree in social work from University of Calgary, and a degree in economics in his home country of Pakistan. He worked with the homeless in Calgary.