Thousands of people marched in downtown Montreal, as other rallies were held in Quebec City, Toronto and Vancouver 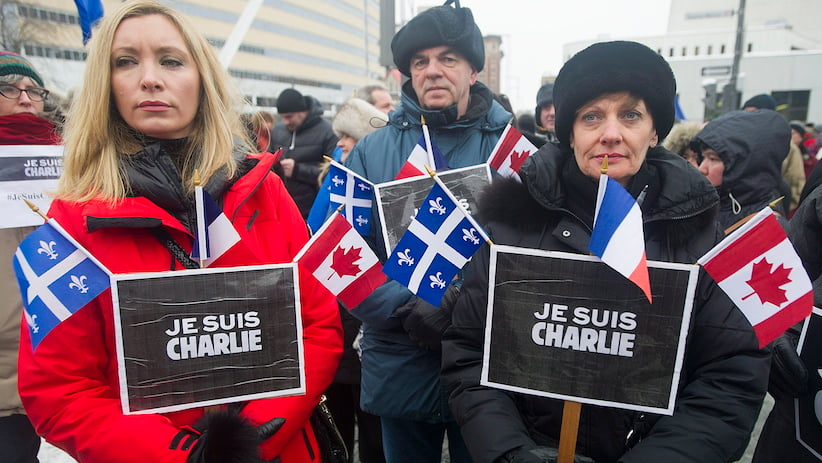 MONTREAL – Canadians took to the streets in a number of cities on Sunday to express their solidarity and support for the victims of the recent terrorist attacks in Paris.

Thousands of people marched in downtown Montreal, with many chanting “Charlie” over and over, a reference to Charlie Hebdo, the satirical newspaper that was the target of the attack that started three days of terror.

Laurent Beltritti, a French flight attendant who happened to be in Montreal for 24 hours, was one of those who participated in the march.

“As I couldn’t attend the event in France with my friends and family, I thought it was important to come here to show my solidarity and to protest in favour of freedom and the right to express oneself without being killed by fanatics,” Beltritti said.

Asked if he was frightened about returning to Paris, Beltritti said “No, I’m not scared. You can’t be scared. That’s what they want. You have to continue to live your life as normal.”

Montreal Mayor Denis Coderre also took part in the march, which ended at the French Consulate, and said there needs to be “zero-tolerance against fanaticism.”

“It’s important to be able to show solidarity and also that we won’t yield to intimidation,” Coderre said in an interview.

In Quebec City, Premier Philippe Couillard attended a similar event in honour of the 17 people who were killed in the attacks at the Charlie Hebdo offices, at a kosher supermarket and on police.

“What we’re saying in particular is, ‘No to fanaticism, no to blind violence, the inhuman violence we have witnessed in the past few days, and yes to freedom,”’ Couillard said.

The premier said the rallies in support of France were extremely important.

“We have to reaffirm our faith in democracy and freedom,” he said. “The worst thing we could do would be to retreat into fear.”

In Toronto, hundreds gathered outside City Hall to voice their support for the victims of the attacks in a sombre event that saw many supporters quietly holding pens, signs and flowers.

“Nothing can really make you come to terms with such barbaric acts, but it certainly is a validation of how people of all faiths and all colours can come together peacefully,” said Fabienne Thuet, who has dual Canadian and French citizenship.

“If anything has been achieved today … it’s that you can come together despite whatever difference we might have and peacefully so. So in a way the terrorists have achieved exactly the opposite of what they wanted to do and that’s a beautiful testimony to what we can do as human beings.”

Dozens gathered to honour the victims of the attacks in Vancouver, where a French flag waved high in the air as supporters held signs and sang the French national anthem before marching silently from Robson Square along Georgia Street downtown.

Camille Panier, 24, stood in the rain holding a sign that read “Not Afraid.” A French citizen who teaches her native language at Simon Fraser University, she said she attended the march because she believes French people should be together at this time.

“I’m kind of shocked. It’s important to remember that we should protect our rights,” she said. “I really want to show that I am not afraid, that’s why I’m holding this sign.”

A small rally was also held in Halifax Sunday. Local media reports said the flag at the city’s Grand Parade Square was flying at half mast and many of the those who attended held pens.

The Canadian events came on the same day of a major unity rally in Paris to mourn the victims and to denounce terrorism.

Hundreds of thousands of people marched through the French capital, with Public Safety Minister Steven Blaney attending on behalf of the Canadian government.

“These terrorists have declared war against all countries and people who believe in peace, freedom, and democracy,” said Blaney in a statement issued after the march.

“But we will not be intimidated. Instead, we are more resolved than ever to unite in the collective fight against global terrorism.”

The leaders of Britain, Germany, Israel and Palestine were also there, prompting the deployment of thousands of additional police personnel to enhance security.