Now bring on the Heat. Game 1 is Tuesday in Toronto. 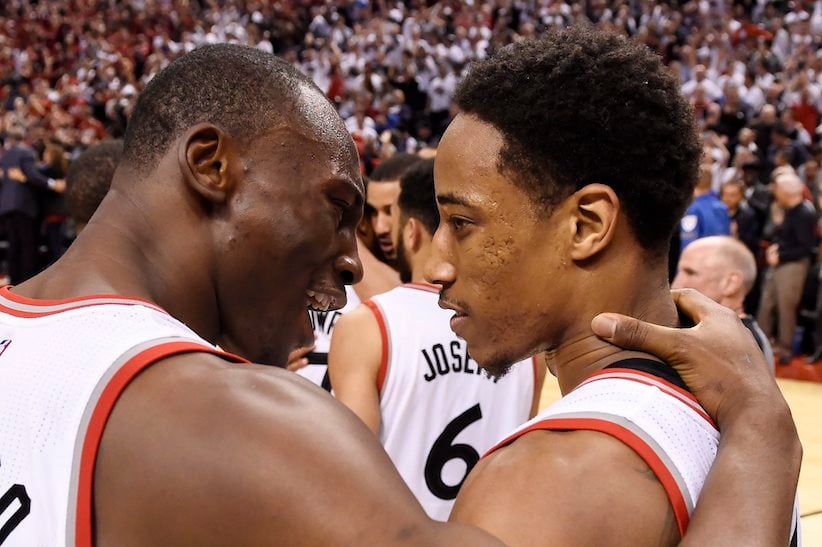 TORONTO — DeMar DeRozan and Kyle Lowry spent late Saturday night in an otherwise empty Air Canada Centre arena, with only the red and white T-shirts laid carefully over each seat as their audience.

“You just think about that moment, when there’s nobody in the gym with you, with no pressure,” DeRozan said.

Sunday, the two who’ve been so instrumental in the Raptors’ rise to success, shrugged off a world of pressure — and finally erased all the heartbreak of playoffs past.

DeRozan poured in 30 points including two huge free throws in the dying minutes as the Raptors beat the Pacers 89-84 in Sunday’s thrilling Game 7, winning their best-of-seven opening-round series against Indiana.

The series win was just the second in Toronto’s 21-year franchise history.

They’ll face the Miami Heat in the Eastern Conference semifinals, with Game 1 on Tuesday in Toronto.

At the post-game podium, DeRozan smiled and whispered to his daughter Diar, balanced on his lap in a sequined No. 10 jersey and furry black skirt.

“Got the monkey off our back, more than anything, with these past couple of years. It just feels good to get that off,” he said.

“The energy, the moments, a lot of people don’t get those opportunities to be able to play in a Game 7 when everything is the line, and all the things that me and this guy (fellow all-star Kyle Lowry, seated next to him) and the team has been through,” he added. “It’s tough to get that moment duplicated, and we just want to live every single minute of it.”

Rookie Norman Powell had 13 points for Toronto, while Patrick Patterson and Lowry had 11 apiece. Jonas Valanciunas had 10 points and a game-high 15 rebounds.

Paul George, who was spectacular all series, led Indiana with 26 points.

Backed by a raucous home crowd, the Raptors led almost the entire game, and took a 78-64 advantage into the fourth quarter.

Toronto went up by 16 points when Powell drilled a three-pointer and then swiped the ball away from Indiana on the next possession for a Cory Joseph bucket. But in a roller-coaster series where no lead has been safe, the Pacers pulled to within three points with 2:36 to play when Monta Ellis drilled a three.

A pair of George free throws made it a three-point game with 53 seconds to play, but DeRozan grabbed a huge steal off George on the Pacers’ next possession and then calmly sunk two free throws with 6.5 seconds to play to secure the victory.

“I think everybody wrote the Raptors off and gave us up for dead,” said coach Dwane Casey. “But that locker-room is full of fighters and scrappers and guys that are really getting into it now. Like I told them, it’s a marathon, but I’m happy for those young men in there.”

The Raptors had advanced to the second round of the playoffs one other time, way back in 2001, when they knocked off the New York Knicks in a five-game series.

After last year’s four-game debacle at the hands of Washington, they’ve played under heavy expectations. The subtext of this season was whether or not they could win a playoff series, and then roaring to a franchise-best 56 wins and earning the No. 2 seed in the Eastern Conference only intensified the pressure.

Monkey successfully removed, the Raptors hope they’ll play more freely in the next round.

“Honestly, before you come into a game like this you probably get hundreds of text messages of people telling you what happened in the past years,” said Bismack Biyombo. “The big thing for us was if we finish second in the East, the right way to finish this series is to move on to the next round. . . This is just the beginning of something great.”

DeRozan, meanwhile, struggled with his shooting all series, going 31.9 per cent over the seven games. He was 10-for-32 Sunday, and when asked about the amount of shots he took, Lowry interjected.

“Can I answer that one? He was going to empty the clip,” Lowry said with a smirk. “That’s what he did tonight and that was his goal. And we’re going to ride with him emptying that clip. I’m answering that question for you so I don’t care if he shot 40 times. He emptied the clip and we won. That’s all that matters.”

Lowry shot 31.6 per cent for the series, but doled out nine assists, and was at his scrappy best Sunday, diving all over the floor.

The Maple Leaf — laid out in a pattern of red and white T-shirts — provided the Air Canada Centre backdrop. And the crowd of 20,669 that included Drake, Montreal Canadiens star P.K. Subban, and Blue Jays Josh Donaldson, Jose Bautista and Marcus Stroman, was electric, in full voice from the opening jump ball.

When Biyombo missed a free throw late in the third quarter, the fans stood and gave the Raptors big man a rousing cheer. He made the second one, with a smile.

Outside, thousands of Raptors fans braved the chilly weather to watch the game on the giant screen in Maple Leaf Square.

“I thought our crowd carried us through the times we were tired, that’s why we earned homecourt advantage,” Casey said. “That kept us going.”

The Raptors looked solid in the first quarter, and backed by 13 points from DeRozan, took a 28-23 lead into the second.

Powell pushed the pace for Toronto in the second with 10 points, including a pair of threes, and the Raptors went into the dressing room at halftime up 50-44.