'Just Passing Through' web series has become beloved in their hometown of P.E.I., and now want to make a movie, 'Pogey Beach' 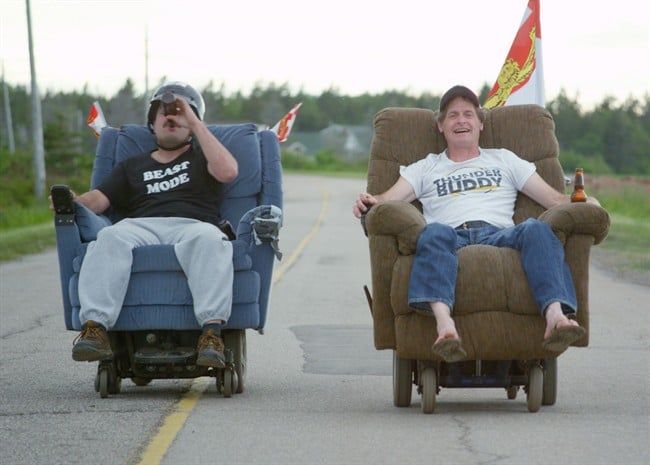 But on Pogey Beach — a fictional soap opera based in a beach on Prince Edward Island’s north shore — it’s not unusual to see an Islander who collects employment insurance sinking their steel toe shoes into the red sand.

After all, they’re looking for work — or so they can claim, should a “pogey narc” come around.

Pogey Beach is a show-within-a-show. It’s beloved by the characters on the web series Just Passing Through, a raunchy comedy based around two small-town Islander cousins, Terry and Parnell Gallant, played by Dennis Trainor and Robbie Moses.

After garnering more than a million views on YouTube, the producers of Just Passing Through are now looking to create a spinoff — a feature-length film about the people who hang out at Pogey Beach drinking Alpine beer and bragging about who has “top stamp,” or the biggest employment insurance cheque.

They’ve started a Kickstarter campaign to fund the $50,000 project. At publication time, $31,550 had been raised with six days left.

Since the release of season one in 2013, Just Passing Through has amassed a cult following of affable Atlantic Canadians who love the show’s sometimes self-deprecating humour.

But fans of the two-season series are cropping up country-wide, with the show’s very first episode still getting up to 2,000 views per week (it has more than 270,000 views in total). That’s without any marketing apart from social media.

P.E.I.’s Upstreet Craft Brewing even made a beer in honour of the show: Top Stamp Honey Brown Lager.

“We never thought in our wildest dreams that it would reach as many people as it has,” said co-creator Jeremy Larter, a filmmaker who lives in Toronto but grew up West Covehead, P.E.I.

The initial idea for Just Passing Through came from watching SCTV spoofs of Goin’ Down the Road, the iconic 1970 Canadian film about two Maritimers who move to Toronto in order to find a better life, said Larter.

In season one of Just Passing Through, Terry and Parnell become stuck in Toronto on their way to work in the Alberta oil sands. While in the “Arsehole of Canada,” they end up selling homemade moonshine and a pornographic film called Going Down the Red Dirt Road.

The pair are back on the Island in season two for an entire summer on “the pogey.” But their rest and relaxation is interrupted when it’s announced that P.E.I., New Brunswick and Nova Scotia would merge to form the Maritime Union, prompting Terry and Parnell to rally a beer strike.

The show features plenty of quintessentially Maritime mannerisms, like breathing inward when saying “Yeah” and calling your cousin “counsint.”

It has been compared to Nova Scotia’s Trailer Park Boys, but vulgar humour and excessive swearing are really the only things they have in common, as Just Passing Through is explictly P.E.I., whereas the boys from Sunnyvale could be from anywhere.

Larter said he has heard some complaints over the years that the foul-mouthed show reinforces negative stereotypes about Islanders and the Maritimes. But most people say it makes them proud to be from the East Coast, he said.

Larter said they also crowdfunded $50,000 to make season two of Just Passing Through, which was released earlier this year, but he said it wouldn’t be feasible to make another seven 20-minute episodes for that price tag.

He said ultimately, they want a network or streaming service to pick up the show so it can continue.

But in the meantime, they decided to take their cameras to Pogey Beach — which is actually called Tracadie Beach. It borders P.E.I. National Park and has similar scenery but doesn’t require a park pass.

There’s already a 10-minute Pogey Beach short film posted on YouTube that has more than 100,000 views.

“We thought doing a Pogey Beach movie would be a good idea because it might get the show out there to more people as well. It taps into a slightly different audience than Just Passing Through,” said Larter, adding that if they achieve their crowdfunding goal, the film should be released early next year.

“And it would be a hell of a lot of fun to make a ridiculous Pogey Beach movie.”