Bob Paulson: 'We need to be thoughtful, consultative and deliberate in these areas' 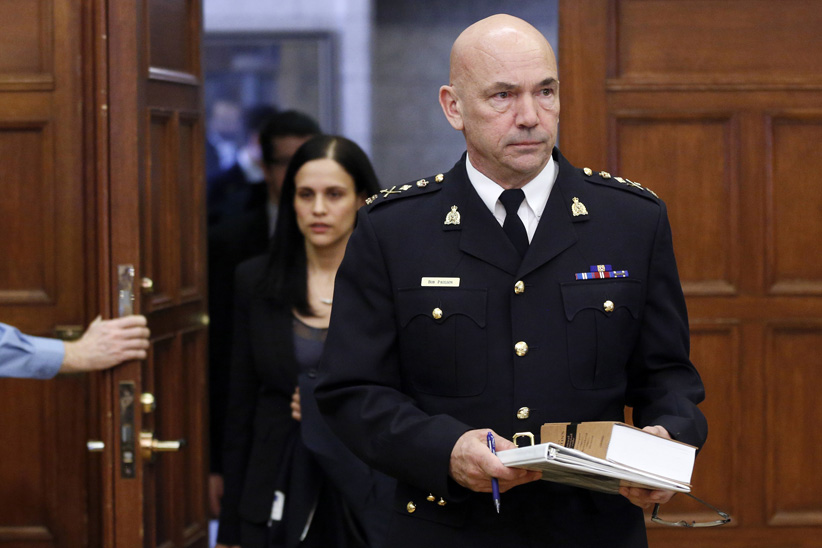 OTTAWA – RCMP Commissioner Bob Paulson referenced the Mounties’ decision to give rifles to more frontline officers as he expressed fears Monday about the increasing militarization of Canadian police forces.

Appearing before the Senate national security committee, Paulson said he wants his officers to have the best equipment possible to uphold the law as well as protect the public and themselves.

But he said he is “afraid of the trend in policing for escalating military-style tools being used by law enforcement to conduct police operations.”

The result is a focus on enforcement and an increased reliance on force, Paulson said, “rather than the problem-solving, community-oriented, prevention approach that is better suited to the Canadian context.”

The commissioner admitted the Mounties have no shortage of heavy weaponry, including armoured vehicles, drones and machine-guns.

More frontline officers are also being armed with carbine rifles, which was one of a number of recommendations that came out after the shooting deaths of three Mounties in Moncton, N.B., in 2014.

But Paulson said the decision to distribute the carbines, which he described as “very electric,” must be matched with greater perception among frontline officers on the issues surrounding use of force.

“Are we going to be going (after) shoplifters with a carbine?” he asked. “Our policies have been refined to sort of think that through.”

Police forces need to spend more time thinking about how they present themselves to and engage with the public, Paulson added, right down to the choice of uniform.

The greatest risk is creating an “us-versus-them” mentality among police officers, which creates distance from and a potentially adversarial attitude toward the communities they are supposed to serve.

“We need to be thoughtful, consultative and deliberate in these areas,” he said.

The Senate committee also heard that the Mounties are struggling with a shortage of hundreds of personnel, with the average detachment understaffed by around five per cent.

Part of the problem is that many officers end up leaving for better-paid jobs with other police forces, Paulson said.

A request to increase officers’ salaries, which the committee heard are among the lowest in the country, is currently being considered by the federal government.

The RCMP is also preparing to make a case to the government for more resources to help with recruiting, the commissioner said, though he wouldn’t say when such a request would be made.