RCMP: 'We are doing everything we can to bring Chase home'

AUSTIN, Man. — Small planes circled overhead while hundreds of people on ATVs, horseback and on foot combed farmland Wednesday near a rural Manitoba home where a two-year-old boy vanished while playing outside. 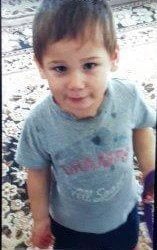 RCMP said it was too early to say whether foul play was involved in the disappearance of Chase Martens, although investigators weren’t ruling anything out.

The priority for everyone searching the area, about 130 kilometres west of Winnipeg, was to find the little boy, said Sgt. Bert Paquet.

“The first 24 minutes are crucial and obviously the first 24 hours as well,” Paquet said. “We’re talking … of a little two-year-old boy who’s out playing and all of a sudden is just not there anymore. (We’re) asking for any information from the public at this point.

“We’ve often solved cases similar to this with very minute pieces of information.”

Chase was last seen at 6 p.m. Tuesday outside his home in the Austin area, where temperatures dropped to -12 C overnight.

He was wearing a blue jacket, black splash pants, a red hat and boots that light up as he walks. He is described as being 2 1/2 feet tall and weighing 30 pounds. He has blue eyes and light-brown hair.

Dozens of searchers could be seen Wednesday walking in a straight line across neighbouring fields. Volunteer fire department trucks, search-and-rescue vans and ATVs constantly moved out of the family’s driveway. Volunteers walked around culverts and fields covered with ice and water from overland flooding.

Chase’s mother, Destiny Turner, told the Brandon Sun she was out all night searching for her boy. She was quoted as saying her son — the youngest of three — was playing outside while she prepared dinner and had never strayed past the family’s woodpile before.

“He’s just a little boy. He can’t even take care of himself yet, and that’s the scary thing, because he’s so dependent on me,” Turner told the Sun.

“We can’t even find a mitt or a footprint.”

Elie Kleinsasser joined the search as soon as he heard the news. He and several dozen others from his Hutterite colony searched all night. The father of five was trying to remain optimistic.

“It makes me feel scared,” Kleinsasser said. “We’re looking for a little boy, hopefully alive, but it was very cold during the night, so we don’t know what to expect.

“At this point, we’re just looking for a little boy, dead or alive.”

Leanne Waddle had just finished her night shift as a hospital nurse when she heard about Chase on the radio. She and her husband saddled up their horses and joined the effort. Waddle said she’s particularly troubled by information from other searchers about a creek near the boy’s home.

“There’s lots of soft spots,” she said, tears streaming down her cheeks. “I hope that he didn’t go that way. I hope probably like everybody else.”

Wilfred and Bernice Catcheway have been searching for their own daughter, Jennifer, at a nearby reserve since the 18-year-old vanished in 2008. When they heard another family was going through the same pain, they joined the search and were going up and down the banks of the creek close to the Martens home.

“It’s heart-wrenching. Pulling up here, I just broke down and cried because that’s just a baby,” she said. “It’s a little baby out there that needs to be found.

“There is always hope. You have to have that hope.”

Don Poschenrieder heard the news from his neighbours on social media, grabbed a walking stick and headed out. After hours of searching, his optimism was fading. His hopes rested on the planes circling overhead.

“Makes you wonder, how far he could have got,” he said.

RCMP said they had enough trained searchers and supervised volunteers and suggested that anyone else wanting to help should simply pray.

“We are doing the same, and we are doing everything we can to bring Chase home,” said Paquet.