'Every day, over the course of a three-year period, Mr. Ghomeshi made it clear to me that he could do what he wanted to me and my body' 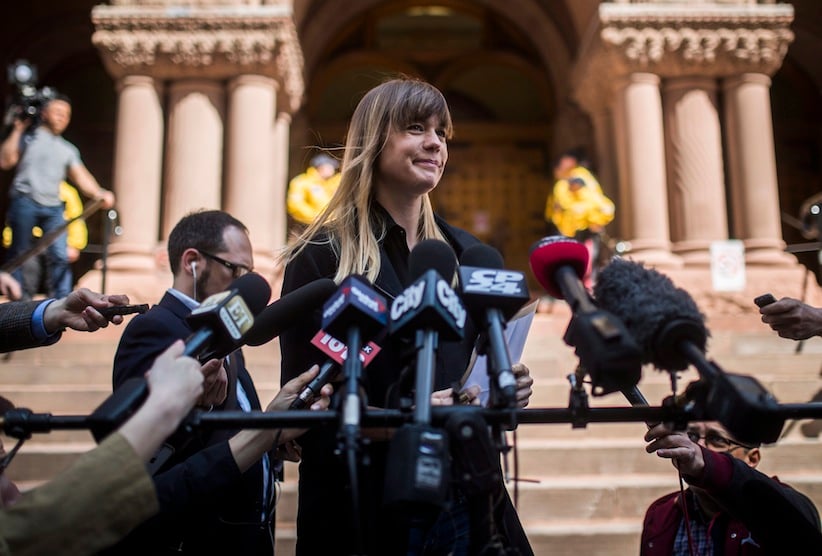 Kathryn Borel is a former colleague of Jian Ghomeshi who was allegedly sexually assaulted by the former CBC host. The charges against him for those instances were dropped after Ghomeshi signed a peace bond on Wednesday. You can read Ghomeshi’s apology here. Borel delivered the following statement outside the courthouse.

Hi everyone. Thanks for coming out and listening. My name is Kathryn Borel. In December of 2014, I pressed sexual assault charges against Jian Ghomeshi. As you know, Mr. Ghomeshi initially denied all the charges that were brought against him. But today, as you just heard, Jian Ghomeshi admitted to wrongdoing and apologized to me.

It’s unfortunate, but maybe not surprising, that he chose not to say much about what exactly he was apologizing for. I’m going to provide those details for you now.

Every day, over the course of a three year period, Mr. Ghomeshi made it clear to me that he could do what he wanted to me and my body. He made it clear that he could humiliate me repeatedly and walk away with impunity. There are at least three documented incidents of physical touching. This includes the one charge he just apologized for, when he came up behind me while I was standing near my desk, put his hands on my hips, and rammed his pelvis against my backside over and over, simulating sexual intercourse. Throughout the time that I worked with him, he framed his actions with near daily verbal assaults and emotional manipulations. These inferences felt like threats, or declarations that I deserved what was happening to me. It became very difficult for me to trust what I was feeling.

Up until recently, I didn’t even internalize that what he was doing to my body was sexual assault. Because when I went to the CBC for help, what I received in return was a directive that yes, he could do this, and yes, it was my job to let him. The relentless message to me, from my celebrity boss and from the national institution we worked for was that his whims were more important than my humanity or my dignity. So I came to accept this. I came to believe it was his right. But when I spoke to the police at the end of 2014, and detailed my experiences with Mr. Ghomeshi, they confirmed that what he did to me was, in fact, sexual assault.

And that is what Jian Ghomeshi just apologized for: the crime of sexual assault. This is a story of a man who had immense power over me and my livelihood, admitting that he chronically abused his power and violated me in ways that violate the law. Mr. Ghomeshi’s constant workplace abuse of me and my many colleagues has since been corroborated by multiple sources, a CBC Fifth Estate documentary, and a third-party investigation.

In a perfect world, people who commit sexual assault would be convicted for their crimes. Jian Ghomeshi is guilty of having done the things that I’ve outlined today. So when it was presented to me that the defense would be offering us an apology, I was prepared to forego the trial. It seemed like the clearest path to the truth. A trial would have maintained his lie — the lie that he was not guilty — and would have further subjected me to the very same pattern of abuse that I am currently trying to stop.

Jian Ghomeshi has apologized, but only to me. There are more than 20 other women who have come forward to the media and made serious allegations about his violent behavior. Women who have come forward to say that he punched, and choked, and smothered and silenced them. There is no way I would have come forward if it weren’t for their courage. And yet Mr. Ghomeshi hasn’t met any of their allegations head on, as he vowed to do in his Facebook post from 2014. He hasn’t taken the stand on any charge. All he’s said about his other accusers is that they’re all lying and that he’s not guilty. And remember: that’s what he said about me.

I think we all want this to be over. But it won’t be until he admits to everything he’s done. Thank you.