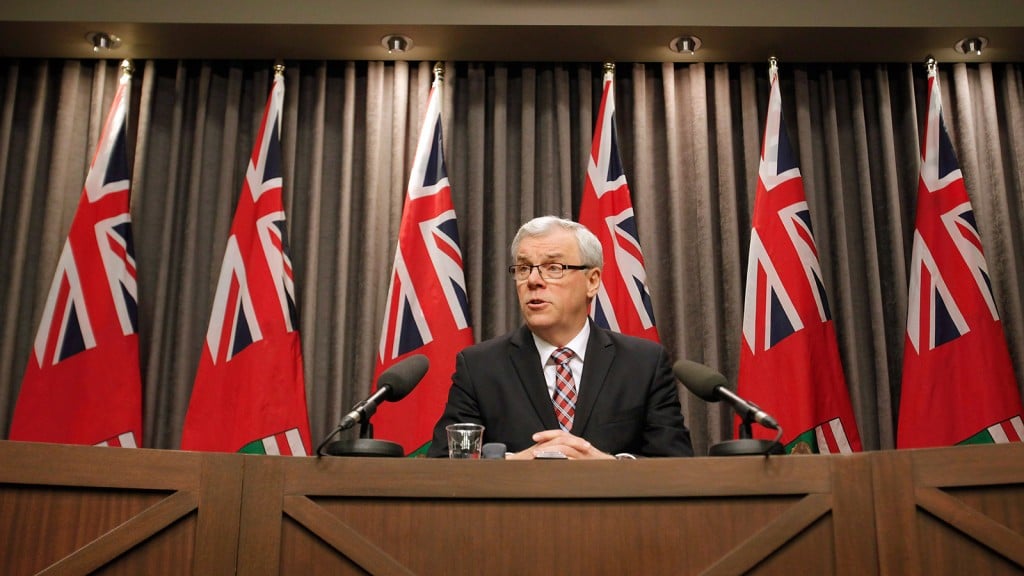 WINNIPEG — Manitoba is officially into a provincial election campaign.

Premier Greg Selinger has met with Lt.-Gov. Janice Filmon and has asked her to dissolve the legislature to trigger a 35-day campaign that will end with a vote on April 19.

Manitoba’s NDP has enjoyed a 16-year run in power, but polls heading into the campaign suggest the party is on the ropes. The New Democrats have faced public backlash over a 2013 decision to raise the provincial sales tax and Selinger barely survived an internal challenge to his leadership last year.

“The choices are clear. They are stark,” Selinger said Wednesday outside the legislature after visiting Filmon. “This election is about the clear policy choices that will make a difference for the future of Manitoba.”

The NDP faces a well-funded Progressive Conservative party under leader Brian Pallister, who is a former MP, and a revived Liberal party under Rana Bokhari, a lawyer who has worked to raise the Liberal profile since taking over as leader in 2013.

Pallister kicked off the party’s campaign in the heart of Selinger’s Winnipeg riding. The Conservative leader reminded voters about his party’s promise to roll back the sales tax by one percentage point it forms government. The $300 million the tax brings in would be recouped by cutting government waste, he said.

No government service is untouchable and all options are on the table, he said.

“It’s about getting a handle on this freight train of spending increases that the NDP is driving,” Pallister said. “There are no sacred cows here. The NDP has overspent in virtually every department.”

The campaign will see Selinger try to climb back from public opinion ratings that suggest his New Democrats are 20 points or more behind the Opposition Tories. The NDP held 35 of 57 legislature seats at dissolution.

The party told voters the sales tax increase to eight per cent from seven was necessary for much-needed road work, flood protection and other infrastructure projects, but support for the party sank.

Five of Selinger’s top cabinet ministers called on him to step down to help the party’s fortunes rebound.

Selinger opted for a leadership race instead and won 51 per cent of the vote on a second ballot. Many stalwarts in the legislature chamber and the party’s back rooms left.

He planned to hold a rally later Wednesday to kickstart the NDP campaign.

Bokhari was scheduled to make an education announcement.

Rana Bokhari: ‘Everyone has to start somewhere’