In a budget that outlined a new carbon tax, the Alberta NDP delivered grim notes: there will be no expectation of balancing the books before 2024 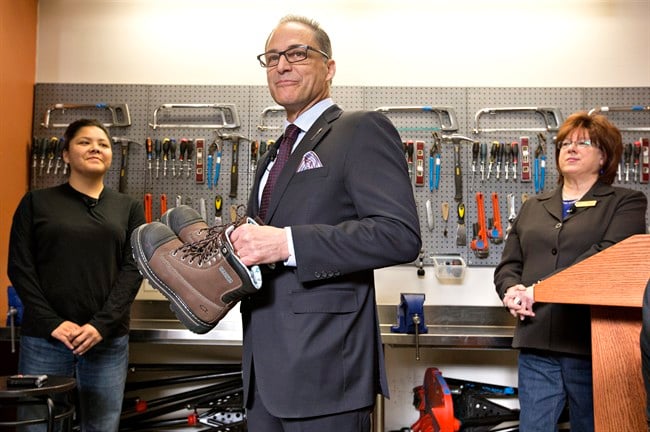 EDMONTON – The Alberta government, with oil prices taking massive bites out of its bottom line, blew past its own spending safeguards Thursday to deliver a budget that forecasts almost $58 billion in debt within three years.

Finance Minister Joe Ceci confirmed that this year’s deficit will be $10.4 billion and said there is no expectation of balancing the books before 2024.

He also outlined details of a planned carbon tax that will cost a two-income household earning more than $100,000 annually about $500 a year by 2018. But there are no other new or increased taxes.

“We are continuing to put the pedal to the metal so that we can support Albertans through this downturn, the worst downturn in a generation,” he said. “We’re going to come out the other side in 2017.”

Next year’s budget deficit is forecast to be $10.1 billion and another shortfall of $8.4 billion is expected the year after that. The last $3.8-billion of rainy-day savings in the Contingency Fund will be gone this year and Alberta will borrow $5.4 billion just for day-to-day operations.

By comparison, British Columbia, a province with a similar population, has a $65-billion debt. And Alberta was not the only oil-reliant province grappling with red ink Thursday. The first budget of the new Liberal government in Newfoundland and Labrador detailed a range of new taxes and levies, but still results in a deficit of almost $2 billion.

To legally rack up the new debt number, Premier Rachel Notley’s government plans to rewrite a law it passed late last year that capped borrowing to a maximum 15 per cent of the province’s GDP. The cap is to be eliminated.

“The NDP have put us on a path of unlimited borrowing and zero timelines for getting our province back to balance,” said Opposition Wildrose Leader Brian Jean.

Alberta Party Leader Greg Clark said “shock” is the only word to describe the level of borrowing.

“The lack of any sort of plan to pay it back, it is irresponsible,” said Clark.

Progressive Conservative Leader Ric McIver called the debt “the monster in the room.”

There is help for businesses in the budget in the form of two new tax credits worth $250 million to encourage investment and capital spending. The small business tax is to be cut to two per cent from three.

The province is avoiding cuts to front-line services.

That was applauded by Guy Smith, the head of the Alberta Union of Provincial Employees.

“This is a measured, reasonable budget based on the difficult economic times the government faces,” said Smith.

“They obviously have determined that they want to keep services to Albertans secure and stable, which is the right thing to do during difficult times.”