Hockey Canada has been recommending half-ice, or cross-ice, for its initiation programs for decades – now it will happen 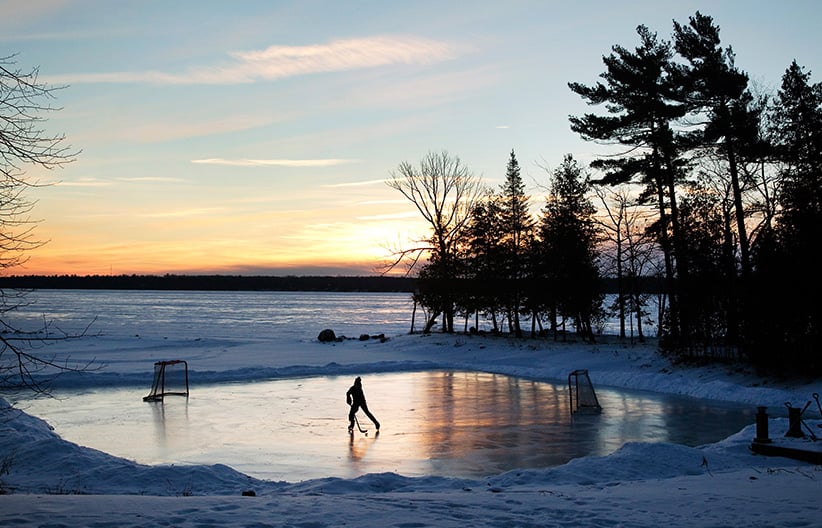 A youth plays pond hockey as the sun rises on Pigeon Lake in the region of Kawartha Lakes Ontario February 4, 2015. (Fred Thornhill/Reuters)

Hockey Canada says it will make it mandatory that children getting their first introduction to the game play on reduced-size ice surfaces instead of full-sized rinks.

The organization which governs amateur hockey has been recommending half-ice, or cross-ice, for its initiation programs for five and six-year-olds for over three decades.

A number of provincial amateur hockey bodies already require rinks be partitioned into smaller surfaces for games for their youngest players.

RELATED: Why the disappearance of NHL fighting is a good thing

But Paul Carson, Hockey Canada’s vice-president of membership development, said there are still holdouts where beginners play their games on full-sized rinks.

“We’ve coined the phrase, ‘Decrease the space, increase the pace.’ It does make all players better.”

Not everyone agrees reduced size is the best way to foster skill. Some online forums and blogs argue there are kids who are ready for full ice and that it’s wrong to hold them back. They argue it’s important to learn icing and offsides.

The Saskatchewan Hockey Association, which recently mandated smaller surfaces for beginners for the 2016-2017 season, acknowledged on its website that some parents may want full ice because they want their child to “play like professionals do” and experience “real hockey.”

But the site also includes a link to a video showing adult hockey players on a rink with enlarged dimensions and giant nets to demonstrate what the experience of full-size ice looks like for kids.

Wayne Wong, an Edmonton dad who volunteers as a coach for initiation hockey, said many kids start the season just learning to balance on skates. They progress quickly to stopping and turning, he said, but games are played on a divided surface across the width of the rink.

RELATED: Wayne Gretzky on the love of his life

Wong, whose own son is four and just started playing, said he used the word “games” loosely, in quotes.

“I can’t imagine having kids play the full ice if it’s a game format,” he continued. “Especially if they tried to make them go from one end to the other, it would be a lot of skating.”

Carson said Hockey Canada watched game videos of little players on full-sized rinks, which he described as one breakaway after another by the strongest player on each team.

“The entire shift is puck control by two players and eight other players skating up and down the ice following the play, and maybe even at some point deciding, ‘I might as well wait down here. It’s going to come back eventually,'” Carson said.

Special boards and bumpers have been developed that allow for quick and easy division of a regular-sized rink into two half-ice surfaces or three cross-ice rinks.

But Carson said Hockey Canada isn’t going to be fussy on how rinks are divided. Two-by-fours are an option, he said, or parents can stand at the sides and push pucks back in.

Carson, who is 60, said he himself learned to play cross-ice as a child.

“In our community, they put fire hose down across the blue lines.”