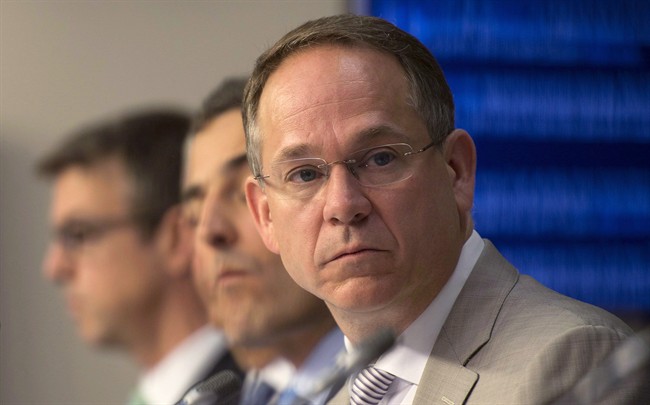 Before day’s end, that same report had prompted an apology from the reported meddler in question: Bell Media president Kevin Crull.

In a story citing unnamed sources, the Globe and Mail said Crull intervened in how journalists reported a major regulatory decision last week — a decision that did not go the way the corporation might have hoped.

Crull demanded that journalists not give any airtime to Canadian Radio-television and Telecommunications Commission chairman Jean-Pierre Blais, the Globe reported. CTV News president Wendy Freeman communicated that edict to journalists, telling some that she feared for her job if they did not comply, the Globe reported its sources as saying.

Blais had just announced rule changes requiring broadcasters to offer a low-cost package to consumers and to allow them to “pick and pay” other individual channels. He had appeared at a news conference, and also did individual interviews that day.

Blais put out statement Wednesday that reminded Bell of its responsibilities under the Broadcasting Act.

“That a regulated company does not like one of the CRTC’s rulings is one thing. The allegation, however, that the largest communication company in Canada is manipulating news coverage is disturbing,” Blais wrote.

“Holding a radio or television licence is a privilege that comes with important obligations that are in the public interest, especially in regards to high-quality news coverage and reporting.”

In his own statement, which emerged after the release by Blais, Crull said his only intention was to suggest that media coverage of the decision focus on “a broad and necessary discussion” of the impact of the decision.

It also suggested he’d spent the day weathering a fair bit of criticism as a result.

“It was wrong of me to be anything but absolutely clear that editorial control always rests with the news team. I have apologized to the team directly for this mistake,” he said.

“Indeed, their strong and straightforward reaction to my intrusion only heightens my appreciation of their independence, integrity and professionalism.”

The Broadcasting Act, which the CRTC applies as it gives out licenses, specifically points to “freedom of expression and journalistic, creative and programming independence” of the networks.

Fife and LaFlamme were commended Wednesday by the Canadian Association of Journalists for defying an attempt to interfere with their coverage.

“It is crucial to note that CTV’s coverage of the CRTC’s decisions was fair, balanced and extensive, and stands up in comparison to coverage of the issue by any Canadian news organization,” Crull said in his statement.

“In short, I’ve re-learned a valuable lesson from the best news team in the business.”

Blais said that one of the pillars of Canada’s broadcasting system, and even Canadian democracy writ large, is the independence of its journalists.

“An informed citizenry cannot be sacrificed for a company’s commercial interests,” Blais wrote.

“Canadians can only wonder how many times corporate interests may have been placed ahead of the fair and balanced news reporting they expect from their broadcasting system.”

Three years ago, Crull and other Bell executives appeared before the CRTC as parent company BCE Inc. applied for its merger with Astral Media.

At the time, Crull insisted that Bell never interfered on the editorial side.

“…Our news operation operates entirely independently and covers stories one hundred per cent based on their view of the journalistic value of that story and covers all perspectives and has never one day, or one story had an intervention from this management team,” Crull said.

Blais, who declined to do interviews Wednesday, has emphasized the importance of quality news and journalism in public comments before.

“Broadcasters are custodians of the television system as a public service. They therefore have a special obligation to ensure that the system reflects our identity, contributes to our democracy and enhances our safety and security,” Blais told the London, Ont., Chamber of Commerce in January.

“Broadcasting can’t only be a purely commercial undertaking whose sole focus is to increase profits.”

In 2013, CTV stood its ground as Prime Minister Stephen Harper’s office threatened to bar a cameraman from travelling on the government’s plane. Dave Ellis had asked an unscheduled question of the prime minister during an event in New York.

CTV is a division of Bell Media, a company with assets in TV, radio, and the Internet. Bell Media in turn is owned by BCE Inc., the country’s largest telecommunications firm.