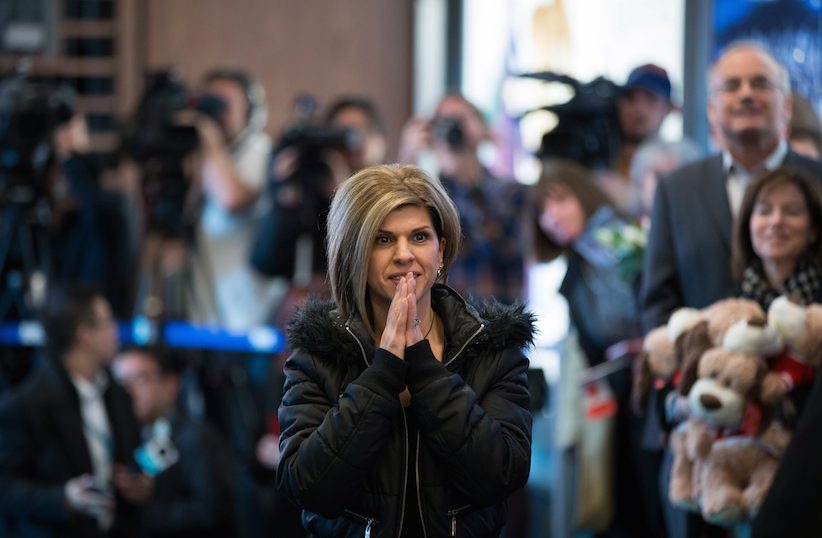 Tima Kurdi, who lives in the Vancouver area, reacts as she spots her brother Mohammad Kurdi and his family, upon arrival at Vancouver International Airport in Richmond, B.C., on Monday December 28, 2015.  (Darryl Dyck, The Canadian Press)

VANCOUVER — Amid bear hugs, smiles and tears, the family of a Syrian boy whose lifeless body washed up on a Turkish beach earlier this year repeated one message when they landed at the Vancouver airport on Monday: thank you.

Mohammed Kurdi, his wife and their five children arrived in Canada as refugees, sponsored by his sister, Tima Kurdi, who has become an international spokeswoman for people fleeing the war-torn nation.

Related: His name was Alan Kurdi

Speaking through his sister, who translated from Arabic, Mohammed Kurdi also thanked Canadians and the government for making his dreams come true.

“I’m happy! Very happy!” he said in English to a crowd of reporters.

His 14-year-old son Shergo clutched a stuffed dog and a paper Canadian flag as he said through his aunt that he was looking forward to going back to school and starting a new life.

Tima Kurdi wiped away tears as she greeted her relatives at the airport’s arrival gates.

The reunion comes at the end of a difficult year for the family.

Tima and Mohammed’s three-year-old nephew, Alan Kurdi, drowned along with his five-year-old brother and their mother while crossing the waters between Turkey and Greece in September.

A photo of the boy’s body face down in the surf sparked international sorrow and momentum to help Syrian refugees.

Related: The boy who changed everything

Alan’s father, Abdullah Kurdi, decided to attempt the treacherous trip after his brother Mohammed’s original refugee application was rejected by the Canadian government because it did not have the necessary documentation.

An official with Citizenship and Immigration Canada invited Tima Kurdi to re-apply for Mohammed and his family in mid-October, as the government was no longer asking for difficult-to-obtain United Nations documents.

Mohammed Kurdi has been in Germany since leaving his family in Turkey seven months ago to find work. He had not met his five-month-old son, Sherwan, who was born in July, but the family reunited in Frankfurt before flying to Canada.

“It was a feeling he cannot express. It was really emotional,” Tima Kurdi said, translating for her brother as he spoke of holding the little boy for the first time.

Among the supporters at the airport was Fin Donnelly, MP for Port Moody-Coquitlam, who Tima Kurdi turned to for help in March, desperate to help her family get to Canada.

Seeing Mohammed Kurdi and his family finally walk on Canadian soil is “bittersweet,” Donnelly said, explaining that he had been working with Tima Kurdi to submit applications for both of her brothers’ families.

“It’s always unfortunate that it takes tragedy to mobilize the global community, but certainly in this case, that’s what happened,” he said.

Related: There is no peace for Abdullah Kurdi

“But we have Mohammed and his family here today. It’s a very celebratory day for Canada and for Tima and her family.”

The Kurdis are among 25,000 Syrian refugees the Canadian government has pledged to welcome by the end of February.

Immigration Minister John McCallum said last week the government will likely not meet its target of having 10,000 of them on Canadian soil by Jan. 1.

The federal website that updates progress listed 2,413 refugees as having arrived in Canada by Dec. 26.

“We wish the war to end, and most of (the refugees), that’s what they want,” she said. “Please, don’t close the door in their face.”

Mohammed Kurdi, his wife and children will all stay with Tima Kurdi and her family for now. The brother and sister are planning to work together at Tima Kurdi’s new hair salon in Port Coquitlam, B.C., Kurdi Hair Design.

One day, Tima Kurdi hopes that her brother Abdullah will join them.

“Abdullah, all of us here, we wish you were here with us. But you’re always here,” she said, placing her hand over her heart.