Remembering Knowlton Nash: 'A great friend and a mentor'

Nash spent 37 years with Canada's public broadcaster, including a decade as anchor of The National 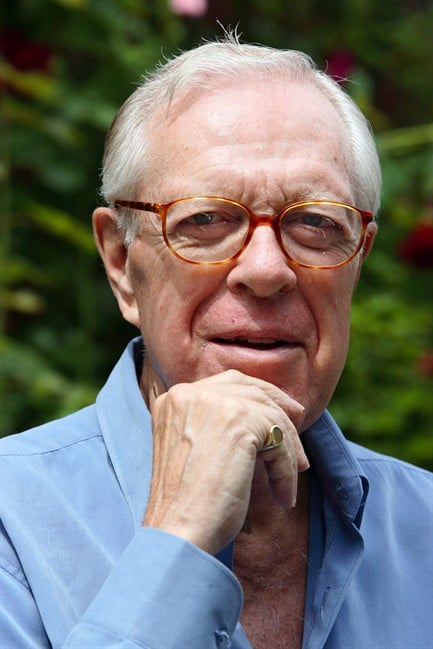 TORONTO – Knowlton Nash, a veteran CBC broadcaster best known as long-time anchor of The National, died Saturday night at the age of 86, around the time he once was getting ready to go on the air.

“Oddly enough it was shortly before 10 o’clock,” said Peter Mansbridge, his successor in the anchor chair.

”10 o’clock was his hour…he was Mr 10 o’clock to us,” Mansbridge said in a phone interview late Saturday.

Nash died in his Toronto home. He had been battling Parkinson’s for some years, The CBC reported.

Nash had a 37-year career with Canada’s public broadcaster, including spending a decade behind the anchor desk of The National, CBC’s flagship news program.

It was there that the broadcaster whose warm eyes appeared magnified behind his oversized glasses earned the unofficial title Uncle Knowlty. It was a reflection of his steady, easy-going style and earnest, scholarly delivery.

“He felt like family to his audience,” Mansbridge said.

“There’s kind of key words about Knowlton’s legacies, the calmness of the approach, the connection with audience.”

The CBC issued a statement Sunday, saying “the broadcasting world has lost a giant and the CBC has lost one of its most esteemed and admired colleagues.”

“He was a pioneer in the industry who inspired a generation of journalists to aspire to the high standards he set for himself.”

Heather Conway, CBC’s Executive Vice-President for English Services added, “While I never knew Knowlton personally, Iike most Canadians, I certainly knew him as the anchor of The National. He had a remarkable career and we are deeply indebted for the contributions he made to CBC and the industry at large; what a legacy he leaves behind.”

Tributes started pouring in from those who he worked with and those he covered as soon as word of Nash’s death spread.

“Had the privilege of working many times with Knowlton Nash. The integrity, intelligence and kindness we aspire to. Thinking of you,” anchor and reporter Ian Hanomansing tweeted.

There were also tributes from some of the political leaders who Nash interviewed and covered during his long career.

“Arlene and I mourn the passing of Knowlton Nash, who was a friend and mentor over many years,” former Ontario premier Bob Rae tweeted.

Ironically, his dedication to the craft led Nash to walk away from perhaps the most influential spot in Canadian television news in April of 1988.

It was the strongest enticement Nash could offer Mansbridge, then a national correspondent for CBC-TV, to stay in Canada.

Mansbridge had reportedly been offered a $1-million salary to co-anchor a morning show on the U.S. network CBS.

But he agreed to stay over a late-night cup of hot chocolate after Nash volunteered to move to The National’s weekend desk.

“He was a mentor, you were going through whatever kind of work crisis you might be going through or career crisis, you’d talk to Knowlton, he’d give you fantastic advice,” said Mansbridge.

His departure–marked by a telephone call by then Prime Minister Brian Mulroney–ended one of the most important decades in the history of the CBC’s television news division.

Nash had been a key player in transforming an ailing news show into a major ratings success. From 1969 when he retired his correspondent’s trenchcoat to 1978 when he took over anchoring The National, Nash was director of news and current affairs for the English network of the CBC.

It was under his steady guidance that The National moved to a then-unheard-of 10 p.m. time and was paired with his risky creation, The Journal.

The National/Journal hour became an unassailable jewel in the network’s crown until anchor Barbara Frum’s death in 1992 brought the Journal to a halt and CBC executives took another gamble with the creation of a 9 p.m. news show, Prime Time News.

He was also at the forefront of changes like going from black and white to colour television and shifting from film to electronic newsgathering, Mansbridge said.

“These were big substantial changes within the way we operated and he was at the pointed end of all of those changes.”

Born Nov. 18, 1927, Nash was the son of a promotions manager. His mother, 20 years his father’s junior, was the first woman to fly over Hamilton, he once bragged in an interview.

Except for a brief spell when Nash wanted to be a jockey, he always said he would be a newsman.

As a lad of less than 10, he put out several editions of his own weekly newspaper–six laboriously typed pages–which he sold for less than a nickel. He understood the business well enough to sell ad space in exchange for bubble gum and chocolate to local merchants.

By the Second World War, Nash was hawking the Toronto Star and Telegram on a Toronto street corner.

And before leaving his Forest Hill high school he was selling stories about collegiate football to The Globe and Mail.

After attending the University of Toronto, Nash was hired in 1947 for $18-a-week by the wire service British United Press. But before that he tried his hand writing for the magazine True Confessions and edited prisoners’ letters for True Crime.

In 1951, he began a handful of years in Washington as head of public relations for the International Federation of Agricultural Producers, representing about 35 million farmers in some 40 countries.

Later, during a lengthy stint as a freelancer for the CBC, Maclean’s magazine and anyone else who would pay him, Nash covered everything from police courts to presidents. He followed John Kennedy, Lyndon Johnson and Richard Nixon, and got the last lengthy interview given by Robert Kennedy before he was assassinated.

“He was right there at the front line of history, and there is no question about that it,” Mansbridge said.

“How many people can point to those milestones in their past?”