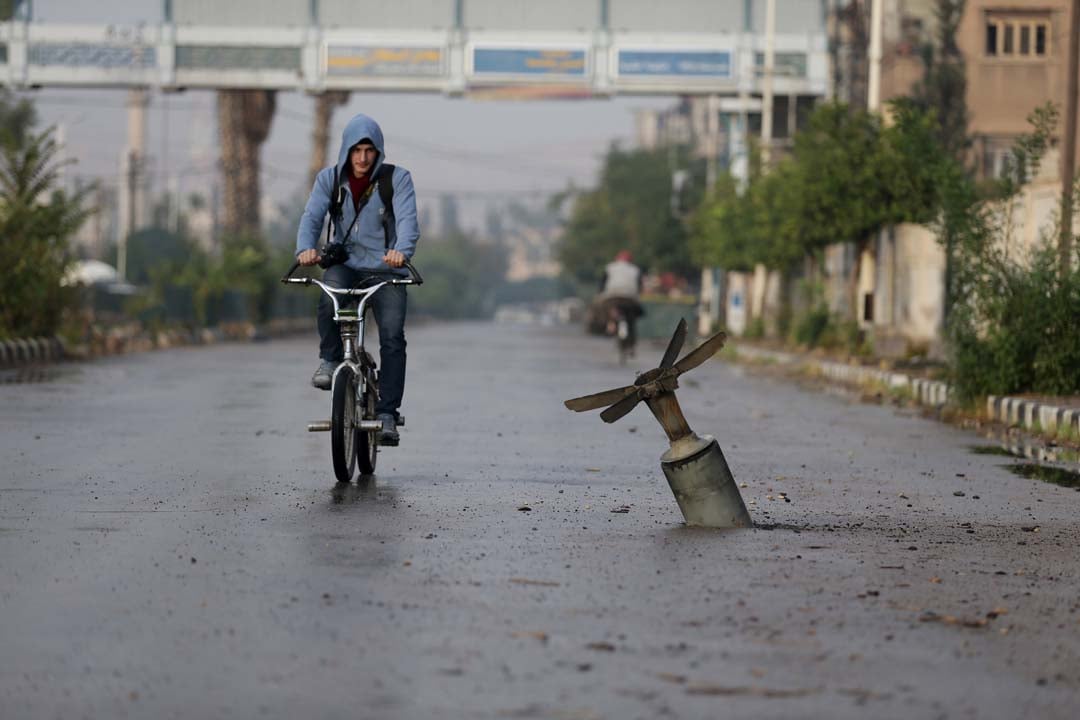 A resident rides his bicycle near what activists said was an exploded cluster bomb shell in the town of Douma, eastern Ghouta in Damascus November 5, 2015. (Bassam Khabieh/Reuters)

OTTAWA – Four Canadian financial institutions invested $565 million in the companies that manufacture cluster bombs, a weapon that is banned under a UN treaty that Canada has ratified, says a report released Thursday.

The report was released in Ottawa by the Dutch peace group PAX, part of the international coalition against the indiscriminate weapons that have been widely linked to the deaths of civilians.

The companies are among 158 worldwide that invested $28 billion in companies connected to the weapons between June 2012 and April 2016, the report said.

Paul Hannon, executive director of Mines Action Canada, is calling on the Trudeau government to issue guidelines that would ban such investments by Canadian institutions.

Canada has ratified the Convention on Cluster Munitions, and while it doesn’t explicitly ban the investments, Hannon said they can be viewed as “a form of assistance” in the use of the weapon.

“These are inhuman and indiscriminate weapons and no financial institution should be investing in them,” said Hannon.

The report names the Royal Bank, Manulife Financial, Sun Life Financial and CI Financial; CI says it no longer holds any shares in the U.S. company that is cited in the report. The other three companies did not immediately respond to a request for comment.

The report says Royal Bank invested $132 million and Manulife $48 million in the U.S. firm Textron, a leading manufacturer of cluster bombs that have been linked to recent attacks in the ongoing conflict in Yemen.

The rights watchdogs, Amnesty International and Human Rights Watch, have documented the use of Textron-made cluster bombs in attacks that have injured or killed Yemen civilians, including children, by the Saudi Arabian-led coalition that is fighting Shiite Houthi rebels.

Suzanne Oosterwijk, the report’s author, singled out Textron, noting that the report documents $12 billion worth of investment in the company by 49 global firms during the four-year time frame.

She said that “really underlines the urgency of our call here today for financial institutions to stop these types of investments.”

The vast majority of the firms named in report — 138 out of 158 — are from countries that have not joined the cluster bomb convention, including the United States, China and South Korea.