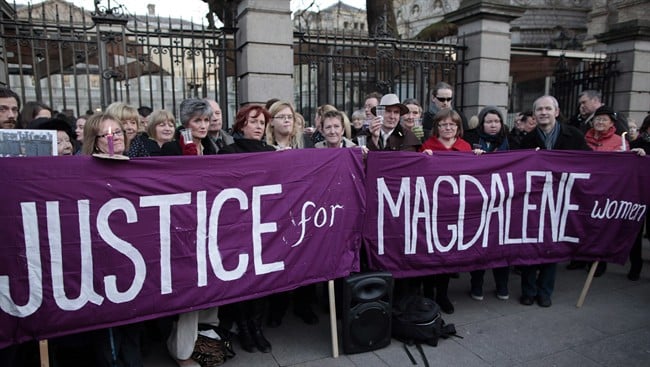 Relatives of victims of the Magdalene Laundries hold a candle lit vigil in solidarity with Justice for Magdalene Survivors and their families outside Leinster House in Dublin, Ireland, on Feb. 19, 2013. THE CANADIAN PRESS/AP, Peter Morrison

ST. JOHN’S, N.L. – They were called fallen women, and through much of the last two centuries they toiled in church-run Magdalene laundries as penance for often-petty crimes, “loose morals” or for having no place to go.

Former workers in several countries, including Canada, say they endured long days of enforced silent labour for little or no pay. Some say they were physically and sexually abused, and told over and over again that they were worthless sinners.

Now, a researcher in Newfoundland says Canada should acknowledge its use of the secretive institutions for which Ireland apologized in 2013.

“An apology would be phenomenal,” said associate professor of sociology Rie Croll. She’s writing a book that includes little known Canadian allegations of slave labour and abuse in the now defunct reformatories.

“In Canada, this seems to be perceived as a problem that existed elsewhere,” said Croll, who teaches at Memorial University of Newfoundland’s Grenfell Campus.

The purported safe havens were named for Mary Magdalene, the biblical disciple who befriends Jesus of Nazareth, stays with him throughout his crucifixion and becomes the first to see him appear in resurrection.

Magdalene laundries are traced back to England in the Middle Ages, where they began as shelters for “wayward” women, Croll said. Roman Catholic church orders began operating them in the early 1800s, expanding to Ireland, Australia, New Zealand, the U.S. and Canada before the last closed in Dublin in 1996.

Croll said there were Magdalene laundries through the 19th and early 20th centuries in many North American cities including Chicago, Toronto, Vancouver and Montreal.

“They became longer term prisons, essentially, as opposed to refuges,” Croll said. “The only people who could release these women were priests and magistrates, judges or husbands and brothers.”

Croll has spent years collecting the stories of former laundry workers, including two in Canada, who often kept quiet for decades. Church records are notoriously difficult to get, she said.

“All of the former inmates have focused on (one) point — they were taken advantage of. They were exploited.

But Croll cites newspaper articles that mention the former Good Shepherd Industrial Refuge in Saint John, N.B., run by the Sisters of the Good Shepherd order of Roman Catholic nuns. A provincial act in 1896 incorporated it, allowing judges to commit “vagrant or incorrigible” Roman Catholic girls to serve out jail terms, or up to five years if she was under 14.

The newspapers document complaints by other laundries, claiming the church laundry was undercutting them on lucrative contracts using “slave labour,” Croll said.

She recounted the story of Chaparral Bowman, now deceased, who was born in the laundry in 1934 to a 13-year-old Maliseet girl who had been raped by white men.

“A local Catholic priest told her parents the best place for her to be would be the laundry. She could have the baby and then she could come back home.”

But Bowman said she herself worked without wages at the laundry from a young age until she escaped over a wall at 18. She described being sexually assaulted by both priests and nuns.

She also said she joined other workers and nuns who taunted and punched a woman, known as Delcina, whom she only later learned was her mother.

“She was the lowest of the low — a pregnant girl who had fallen into sin,” Croll said. “Chaparral ended up carrying enormous guilt about this and never did really have a relationship with her mother.”

Delcina was kept at the laundry for 14 years before she was released in poor health, Croll said.

“She was used for labour as long as she could be used and then was discarded back on the street.”

Croll said she died destitute in 1968, aged about 47. Her daughter, after escaping the laundry, battled addictions and worked as a prostitute before getting off the street with help from a psychiatrist and a loving man.

“This helped her to unlearn her indoctrination by the nuns — the once deeply ingrained message that she was inherently bad and the product of sin.”

Multiple requests for comment from the Good Shepherd Sisters of North America were not answered.

In a 2013 statement after an independent report found evidence of major abuses in their institutions in Ireland, the Good Shepherd Sisters called their laundries there “part of the system and the culture of the time.”

“We acted in good faith providing a refuge and we sincerely regret that women could have experienced hurt and hardship during their time with us,” said the Sisters, who were among four religious orders that ran Magdalene Laundries in Ireland.

The Irish government in 2013 itself apologized for its role as at least 10,000 women and girls were forced into unpaid labour in Magdalene laundries from 1922 to 1996. A related inquiry found several government departments had contracts with the laundries, and workers could be arrested without warrant if they’d run away.

Rachael Romero, one of Croll’s interview subjects, wants an apology and back pay with interest for her ordeal in Australia. She was 14 when she spent a year starting in September 1967 at the Pines laundry in Adelaide, run by the same order of Roman Catholic nuns.

She had run away from home to escape her father’s beatings, she said from upstate New York where she is now an artist and teacher.

Romero remembers fences with barbed wire guarded by dogs, long days working in the hot, loud laundry, bullying by older workers and bland food with almost no fruit or vegetables. She was allowed minimal correspondence schooling, she said.

“There was no talking. Complete silence all the way through the meals, although there was the nun who barked at us and told us what hopeless sluts we were, and no one would ever want us.

Romero said she was released after a year to family friends. She was in her 50s before she ever spoke publicly about the laundry, and noted there’s still a stigma in Australia.

Croll said details are sparse in Canada about how many women may have had similar experiences, and when.

A spokeswoman for Status of Women Canada said it is not reviewing the issue at this time.

“We need to be sure that this doesn’t happen again.”