What do you do with a mother who does the unthinkable?

Despite Harper's law-and-order agenda, the government tiptoes around the issue of infanticide 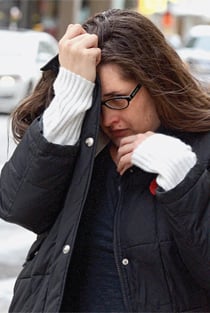 Meredith Borowiec wasn’t difficult to catch. Even as the Calgary police rescued an abandoned newborn boy from a trash bin in October 2010, she sat on the steps of her apartment building, quietly watching. When an officer approached to ask if she’d seen anything suspicious, he immediately noticed the blood staining her coat and pajama bottoms. It was in the ambulance that she confessed to having given birth and trying to dispose of the child. When detectives began to examine her history, she admitted to having done the same thing—but with fatal consequences—twice before. “I was horrified with myself,” Borowiec tearfully told a detective. The 2008 and 2009 abandonments, after having kept her pregnancies secret from her long-time partner and given birth alone, were akin to “out of body” experiences. “It was like something took over me. It was like I wasn’t in control.” She wasn’t even able to provide the sex of her dead children.

Earlier this month, Borowiec, now 32, stood in a Calgary courtroom and pleaded guilty to the aggravated assault of her rescued son. Originally charged with second-degree murder for the 2008 and 2009 deaths, she was convicted of two counts of infanticide last November. “I have accepted what has happened and feel horrible about it. I will have to live with it,” she told the court. The Crown is seeking a total of 11 or 12 years in prison—the maximum sentence for each infanticide is five years. Although with three years credit for her time in pretrial custody, it is doubtful she will serve anywhere near that, if anything at all. (The Crown is appealing.) There’s also the issue of her reproductive future. In July, Borowiec gave birth to a fourth child, who was immediately handed over to social services. Her lawyer has suggested a 15-year peace bond, with regular pregnancy tests. The judge is scheduled to deliver his decision Jan. 29.

Canada’s infanticide law, adopted in 1948 and based on a British statute, makes reference to a type of temporary insanity in women, brought on by the effects of childbirth or lactation, disturbing “the balance of her mind.” The evidence suggests it was more of a pragmatic response to a particular legal conundrum: when the only available charge was murder, and the mandatory sentence death, few judges or juries were willing to convict young women of killing their unwanted newborns. Especially when the men who had impregnated them—often out of wedlock— faced no sanction at all.

Sixty-five years later, times have changed. Birth control is widely available. The social stigma of unmarried women who have children has all but disappeared. And Canadian law places no limits whatsoever on abortions. “Women faced with an unwanted pregnancy now have a number of less desperate alternatives available to them,” Supreme Court Chief Justice Beverley McLachlin wrote in a 1991 report. At the time, she took issue with a statute “based on the questionable premise that the experience of childbirth temporarily reduced a woman’s moral capacity and responsibility.” But despite such high-level criticism, the law remains on the books in Canada. And there seems to be little taste for its reform.

In 2011, the Supreme Court declined to hear two Ontario cases where lower courts had ruled the killing of newborns to be infanticides, rather than first-degree murders. The refusal left an Ontario Court of Appeal ruling in the case of a Guelph woman—who was sentenced to one year in jail in addition to pretrial custody for smothering one baby in 1998 and another in 2002—as the only substantive examination of the law. “The drastically different penalties available upon conviction for murder, manslaughter or infanticide reflect the very different levels of moral blameworthiness attached to each offence,” Justice David Doherty wrote for the court. Parliament, he said, has left no doubt that “a mother who commits a culpable homicide that constitutes infanticide is regarded as having committed a much less serious crime.”

“The matter is now settled in Canadian law,” says professor Kirsten Kramar, chair of the University of Winnipeg’s department of sociology, and the author of a book on infanticide in Canada. “We don’t say it’s not a crime, but we mitigate.”

Kramar acknowledges the statute seems archaic, and perhaps even discriminatory, given that men who kill newborns under similar psychological duress aren’t able to avail themselves of the defence. But it still plays a useful role, she says, providing courts with a more humane way to deal with women who don’t meet the narrow definition of insanity, yet are nonetheless deeply troubled.

Isabel Grant, a University of British Columbia law professor who specializes in homicide and mental health issues, says that while the Ontario decision clarified what constitutes infanticide in Canada, the Crown seems to be headed in the other direction—increasingly prone to lay murder charges against women who kill their babies. “I think they’re taking a more punitive approach. Especially if it involves more than one child,” she says. “When there’s a pattern, people tend to disbelieve.”

One solution is creating another “catch-all” category of third-degree murder that would allow more discretion in sentencing. Grant doubts, however, that the current government will entertain such a move since the Conservative reforms to date have been targeted at making murder laws tougher.

Still, it’s curious that the Harper government’s law-and-order agenda seems to tiptoe around the issue of infanticide. And that despite high profile cases like Borowiec’s, most of the discussion about the law is confined to pro-life websites. The circumstances that gave rise to the charge have changed greatly over the last seven decades, but the basic problem persists: What do you do with a mother who does the unthinkable?