Return to Fort McMurray: The long journey to a new normal

To Michaela Magee, Wednesday didn’t feel like the start of June in post-wildfire Fort McMurray. It felt like that big old reunion a 19-year-old grows used to having every September.

“It’s as if you’re going to your first day of school,” she says, sitting on a grassy curbside at Fort McMurray Composite High. The comparison makes some sense: friends and neighbours check in with each other and catch up after a long break. Many have adventures to share, and return with a new sense of focus or perspective.

But any frame, any way of relating this experience to almost anything else on earth will fall well short of a solid comparison. It couldn’t possibly, 29 days after Canada’s largest prolonged disaster evacuation, after roughly one-10th of a vital Alberta city was destroyed and after many residents found safety on a highway ride through a filmic depiction of Hell. 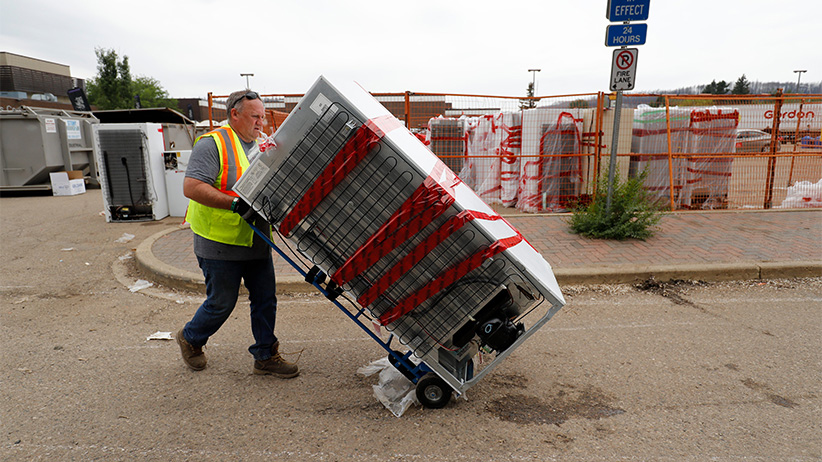 Stewart McCullagh a contract worker from Calgary, moves fridges into a containment area after they have been deemed unsafe in Fort McMurray on Wednesday, June 01, 2016. (Photograph by Chris Bolin)

Consider Magee’s afternoon of June 1, the first day of Fort Mac’s phased re-entry. She was enjoying a free burger hosted by the company roving around town to restore every house’s natural gas heating, one by one. The high school she lunched outside is shuttered until September, but its gymnasium serves as an information centre for returnees and a place to pick up boxes of cleaning supplies marked with the American Red Cross logo. At the college dorm across the parking lot, contract cleanup staff carted away dozens of landfill-bound refrigerators. Magee’s partially destroyed community of Saprae Creek isn’t allowed to return for a couple of days, but she went to inspect her boyfriend’s street, Crescent Heights—the street where on May 3, she did her first-ever volunteer firefighter duty on an active residential blaze, and used residents’ garden hoses like extension cords to tamp down hotspots that were nipping at their backyard fences.

June 1, the first day of Fort Mac’s phased re-entry, was the major step on the journey toward normal in Fort McMurray. Normal is many fields of ash and probably several years off on the horizon, but after a month forced away from the city, residents couldn’t be blamed for seeking some semblances of the familiar or ordinary.

It would hit many homeowners and renters when they first rolled onto the driveway: empty garbage and recycling bins, left out four weeks ago but mercifully emptied so the waste smells didn’t attract bears. People mowed their overgrown lawns, and some did their neighbour’s, as a courtesy. When they returned to their houses, many in the largely unaffected Lower Townsite district—the first part of McMurray invited back in—didn’t encounter foul smoke smells on their walls, or curtains or upholstered chairs and sofas. But many opted to junk their fridges, or at least toss out all their contents. “Yup, there’s some science experiments in there,” said Mike Nesbitt, hauling his fridge out back as a precaution before inspecting its mouldy specimens, as a fridge purchased that morning in Edmonton waited in the back of his pickup truck. (One apt magnet they pried off the now-dead appliance reads: “If it walks out of the refrigerator, let it go.”) On a kitchen hook, bananas had blackened and shrivelled like wilted flowers. One loaf of bakery bread had red-speckled yellow mould on top of a trim hedge of green mould, after sitting on the counter all this time. Next to it, a loaf of brand-name Italian bread looked fine, and only smelled a bit stale—a reminder of the might of modern preservatives.

Because a boil-water advisory lingers in the Recovery City, bottled water is a hot commodity and everyone needs their natural gas switched back on to cook and clean dishes, or have a hot shower after the day’s lengthy drive home from Edmonton (five hours south) or farther away.

Most restaurants aren’t open yet either, and will have to tread carefully amid that must-boil rule (forecast for much of June). It’s also why the supermarkets that have opened to serve hungry returnees have empty shelves in their prepared foods sections, among other parts of the stores that haven’t yet been restocked.

But something else smacked of the familiarity McMurrayites experienced in exile—the kindness of strangers sympathetic to their plight. At a Superstore grocery, a woman lacked enough money in her account to pay her $300 bill. An ATB Financial bank employee in line picked up her tab, the sort of strangers’ goodwill many McMurrayites have been receiving for weeks.

ATB and TD Bank have been charitable to their own employees, as well. They’ve reopened to serve returnees, but let local workers spend time resettling. Bank staff have volunteered to pitch in from elsewhere in Alberta—Edmonton, Innisfail, St. Paul, and other towns.

Fort Mac is normally a fairly transitory city, of visiting labourers and newcomers from all over Canada and the globe, and for the long recovery, it’s gone extreme. Out-of-town RCMP and firefighters are everywhere, as well as small armies of restoration contractors preparing more businesses and institutions for reopening.

Macdonald Island, normally the city’s bustling recreation centre, is merely a staging area for these visiting workers. A mobile Tim Hortons is giving away free coffee in the parking lot in exchange for Red Cross donations, one of the few places to get a warm java in town. Printed sheets saying “Tim Hortons parking” are taped to the blue wheelchair-parking-only signs—a further symbol of what’s needed and what isn’t in this strange transitional period for this city.

Related: After the fire: One last boom in Fort McMurray? 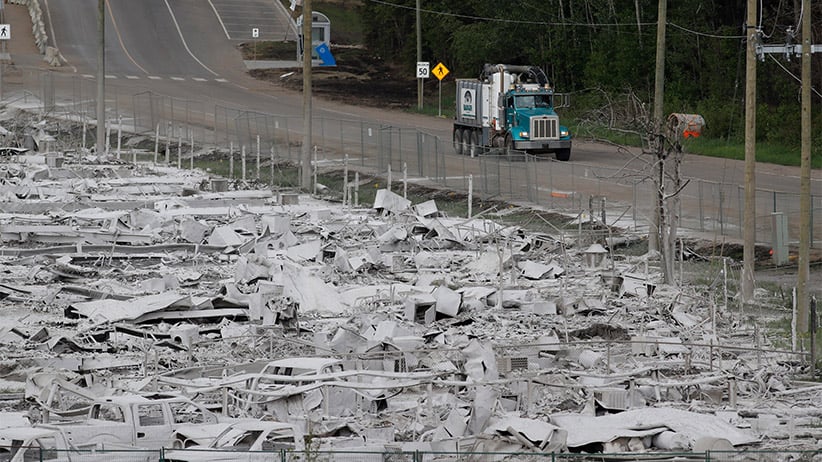 The neighbourhood of Waterways after it burned down in Fort McMurray on Wednesday, June 01, 2016. (Photograph by Chris Bolin)

Authorities told families that because of the uneven air quality and the water problem, it’s still an unsafe city for children or senior citizens. So this increasingly family-friendly city did seem more like the industrial frontier town it’s long been caricatured as. Some kids did come back to the stuffed animals, toys and beds they missed—in 4½-year-old Prayosha Patel’s case, it’s because there was no childcare options back in Edmonton, mother Pragna explained. “Every day she asks: ‘Is our home safe? Can we go?’ ” She rushed to her toy kitchen as soon as Dad unlocked the door, and was in her helmet and kneepads for a giddy sidewalk bicycle ride by Wednesday afternoon. But this was a one-day return to meet their insurance adjuster and check belongings. They’ll pry Prayosha away the next morning, and return when the city is deemed safe for children like her.

Most other McMurray neighbourhoods will be invited back Thursday and Friday, though some have already trickled back in—including more than 1,000 who had already returned to help with re-entry. One of those was Terry Seaboyer, a heavy equipment operator who’d been assisting utility crews. He lives in a basement suite across from a part of Wood Buffalo Estates that was reduced to a field of char and rubble; many of his neighbouring houses feature melted or warped vinyl siding. Power was out here for several weeks, so getting rid of the fridge was a foregone conclusion—including, alas, the freezer chest full of Digby scallops, lobster and other seafood this Nova Scotia native and his housemates had collected. “Oh, boy, I don’t even want to talk about that. That one hurts,” he said, on what was also his first day back home. Coming within five metres of that rotten freezer was a sensory assault.

The mostly devastated districts of Abasands, Waterways and Beacon Hills are closed entirely; because of chemicals from the debris polluting the air and soil, that area hasn’t been deemed safe for the thousands of residents whose houses and apartments survived the flames—at least, not until the debris is hauled away, months from now. At the entrance to those neighbourhoods are concrete barriers and police sentries, keeping residents and disaster gawkers away from the areas that are years away from whatever the next normal will look like.

Photo essay: What they couldn’t leave behind in Fort McMurray 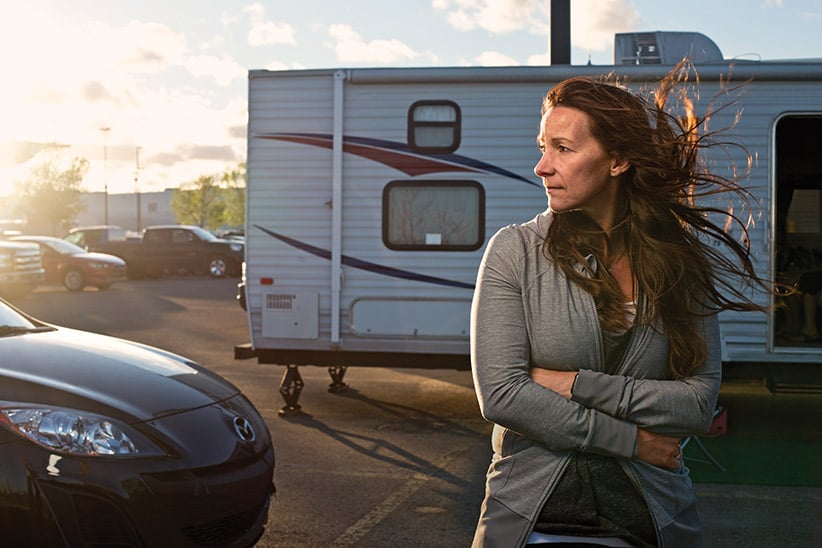 “I’m a nurse at the hospital. I came home Monday and the sky was clear. Still my husband said maybe we should pack a few things. So we packed some bags—about five suitcases and a couple of little bins. [Tuesday] we threw them in the vehicles and hooked up the trailer. We drove through probably two kilometres of smoke and fire before everything cleared out."