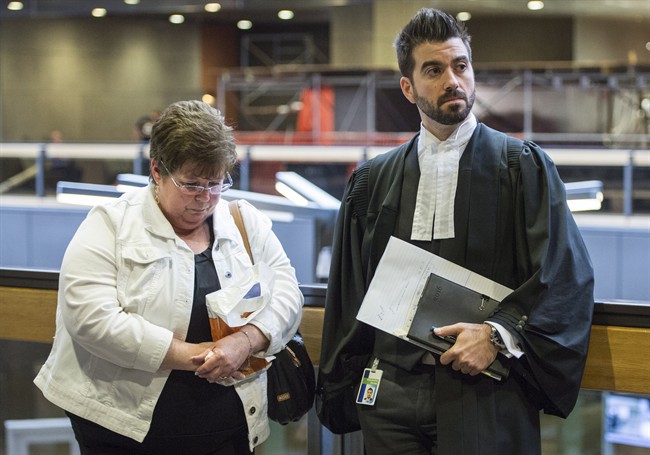 Diane Blanchette, sister of murdered stagehand Denis Blanchette, and crown prosecutor Dennis Galiatsatos are seen at the courthouse following the verdict at the trial of Richard Henry Bain Tuesday, August 23, 2016 in Montreal. A jury has convicted Quebec’s 2012 election-night shooter of second-degree murder in the death of the lighting technician and found him guilty of three counts of attempted murder. (Paul Chiasson/CP)

MONTREAL – A jury has convicted Quebec’s 2012 election-night shooter of second-degree murder in the death of a lighting technician and found him guilty of three counts of attempted murder.

Tuesday’s verdict at the trial of Richard Henry Bain came on the 11th day of jury deliberations.

Bain, 65, was facing a charge of first-degree murder in Denis Blanchette’s death outside a nightclub as then-Parti Quebecois leader Pauline Marois was inside celebrating her party’s election win on Sept. 4, 2012.

Instead, the jurors found him guilty of the lesser charge of second-degree murder as they rejected the defence’s argument he be found not criminally responsible.

Bain showed no reaction in the prisoner’s box as the verdicts were read out.

His lawyer said although the outcome was not a victory, his client was satisfied the jury rejected the possibility of finding him guilty of first-degree murder.

“He (Bain) is very happy because had he been convicted of first-degree murder at his age, it would have been a death sentence,” Alan Guttman told reporters after speaking briefly to Bain.

Bain faces a sentence of life imprisonment with no possibility of parole for at least 10 years on the second-degree murder conviction. Guttman said that is what he will seek at sentencing arguments scheduled for early September.

He also said he will consider whether to appeal the convictions.

Crown prosecutor Dennis Galiatsatos said he hopes the victims would be satisfied with the jury’s decision.

“I hope the verdicts will provide them with at least some measure of closure to help them get through this chapter in their lives,” he said.

Galiatsatos would not specify the sentence he would seek for the conviction, which stipulates Bain can be denied parole eligibility for up to 25 years.

He said the Crown’s position would reflect the fact that “Mr Bain attacked not only stage technicians, working men and working women, citizens and police officers, but he also attacked democracy and the very values that our constitution stands for.”

Guttman argued throughout the trial Bain was mentally ill at the time of the slaying, while the Crown said the crimes were planned and deliberate and politically motivated by anger over the PQ victory.

Bain was heavily armed and wearing a balaclava and a blue bathrobe when he fired a single shot before his rifle jammed.

The two men were milling about with a dozen colleagues outside the Metropolis club waiting for the PQ rally to end.

Bain was tackled by police and arrested without firing off another shot, despite several attempts to keep going, civilian and police witnesses told the court.

As he was led away, Bain yelled out in French at a television camera: “The English Are Waking Up.”

Nearly four years later, the case centred on Bain’s state of mind as the accused mounted a mental disorder defence outlined in Sec. 16 of the Criminal Code.

The Crown and defence presented two different versions of the night’s events, in part through the duelling reports of two forensic psychiatrists.

The defence’s Marie-Frederique Allard claimed Bain was psychotic the night of the shooting, likely stemming from undiagnosed bipolar disorder. Bain believed he was on a mission from God.

The Crown’s expert, Joel Watts, argued Bain wasn’t sick at all and likely acted out of anger over the PQ victory.

At trial, the accused claimed to have no recollection of the events.

Bain said he’d overdosed on Cymbalta, an anti-depressant, which he suggested triggered a memory loss.

There was no trace of Cymbalta in his blood and neither psychiatrist believed the 2012 psychosis was linked to an overdose on anti-depressants.

Bain asked for directions to the Metropolis, chose the right weapons, loaded them properly and took care to remove the licence plate from his car, Galiatsatos said.

Galiatsatos said Bain appeared to be very aware during conversations with police and in particular with a nurse he told two days after the shooting: “I know what I did was wrong.”

The Crown also referred repeatedly to a series of handwritten answers from Bain during a November 2012 meeting with Allard.

The accused wrote he intended to “kill as many separatists as I could” and that he would have kept going had his weapon not jammed, even shooting Marois had he had the chance.

Galiatsatos said Bain was political and stayed that way after his arrest, cold-calling various radio and television stations in both languages to discuss his political “vision” for Montreal to separate from Quebec.