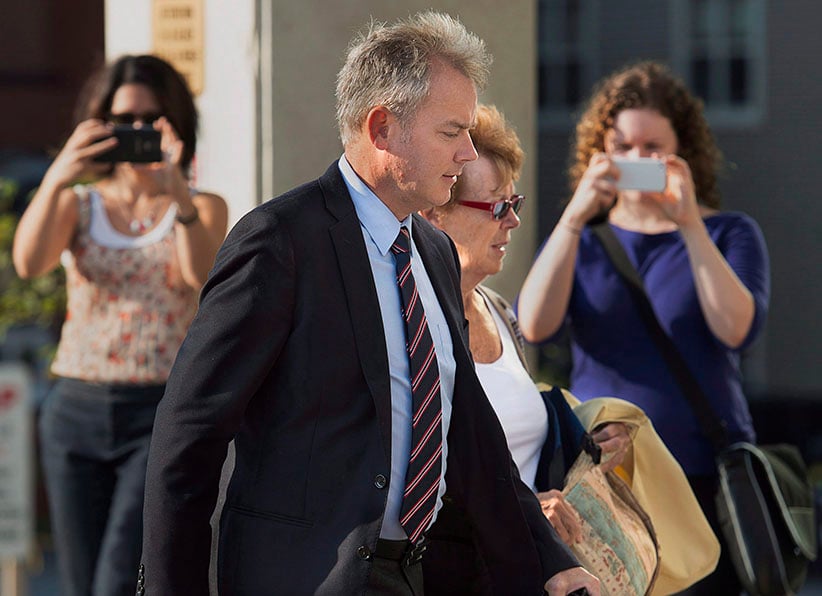 Dennis Oland, accompanied by his mother Constance Oland, arrives for the start of his trial in Saint John, N.B. on Wednesday, Sept. 16, 2015. (Andrew Vaughan/CP)

FREDERICTON — Dennis Oland’s mother and wife issued a joint statement Wednesday saying they are certain the person who killed Richard Oland is still on the loose.

The statement from Connie and Lisa Oland says they wanted to respond to repeated media requests following the verdict in Dennis Oland’s murder trial.

In the statement, Connie and Lisa Oland say this week has marked the lowest point of a “devastating and unspeakably sad time” for the family.

The statement goes on to say the women are certain Dennis Oland is innocent and that the person responsible for the murder remains at large.

Dennis Oland’s lawyers have said they are preparing for an appeal, and Wednesday’s statement says it will be pursued as soon as the process allows.

“Like you, we continue to be stunned and shaken by the outcome of the trial — especially given the circumstantial nature of the prosecution’s case,” the statement says.

Earlier in the day, New Brunswick’s Justice Department confirmed it has offered professional support to the jurors who took part in the lengthy murder trial, which started in September and included frequent viewings of gruesome photographs.

A department spokesman said officials have “reached out to the jurors … and offered support,” but Dave MacLean wouldn’t say what form the assistance would take or whether any jurors had accepted.

When Dennis Oland was convicted on Saturday, he collapsed into a chair, sobbing uncontrollably.

He began wailing and saying, “Oh my God,” after the verdict was read in a hushed Saint John courtroom.

Following the verdict, Dennis Oland’s wife Lisa looked at the jurors and said, “How could you do this?”

Richard Oland’s body was found face down in a pool of blood in his Saint John office on July 7, 2011.