Our Q&A with Nadine Pequeneza, whose documentary captures an emotional debate as Canada debated its assisted dying laws 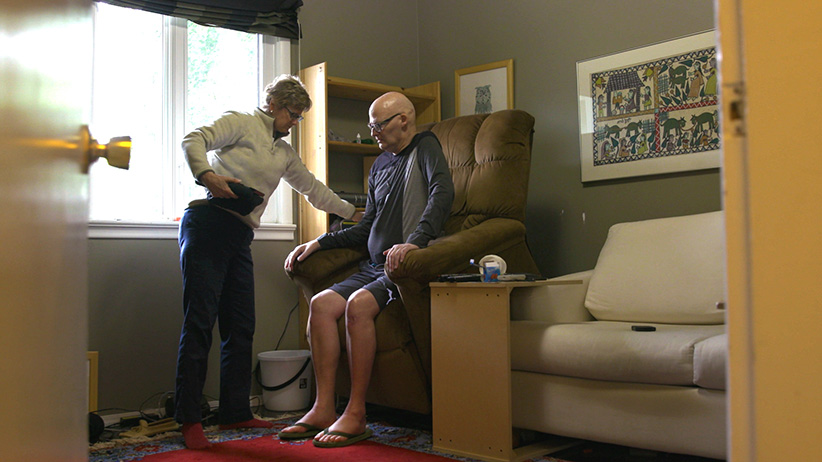 Toronto filmmaker Nadine Pequeneza’s documentary on assisted death, Road to Mercy, is a deep, aching, finely drawn film. It explores the issue through a series of intimate individual portraits of patients seeking assisted death, the loved ones coming to terms with their decision, and the doctors and therapists who support them.

The people at the centre of these stories have very different conditions and reasons for wanting an assisted death—there’s a young Belgian woman seeking deliverance from mental illness, a formerly globe-trotting adventurer now afraid ALS will drown him within his own body, and an elegant, self-possessed Quebec woman with terminal cancer. Some of Pequeneza’s subjects got the death they wanted and others did not; the film unfolds over the very months when Canadian law was changing beneath their feet.

Maclean’s spoke with Pequeneza about Road to Mercy, which premieres Thursday, Oct. 6 at 9 p.m. ET on CBC.

Q: What made you want to explore this topic in a documentary?

A: I thought this was a pivotal moment, not only in Canadian history, but internationally. This decision that we were given by the Supreme Court opened up so many doors, and we were going to have to come to terms with this—especially because it’s not like this just came up for the first time in Canada. It’s been a long process to get here. But I think with the aging population, it’s really taken on much more interest in the general population. So there’s just a real shift in terms of the way Canadians were thinking about this issue, and their willingness to delve into it.

Q: What was the timeline when you were working on this?

A: We started developing it in the summer and took it to CBC in July 2015, so it was around the time all the committees (on assisted dying legislation) were being struck. Given that Canada was going down this road—being pushed down the road by the Supreme Court—and that these questions were being raised about jurisdictions where it had been practised for more than two decades, I thought it would be an interesting time to do a documentary. We were filming up until June and July of this year.

Q: You have some scenes about the evolution of the law and policy, but the story is really told anecdotally through this group portrait of very personal experiences. How did you land on that way of telling it?

A: It’s a bit my style, I tend to do observational films. And I try to include within that a very factual context in which to understand those personal experiences. I think people really learn and open up their minds and consider other viewpoints when they experience with other people. Especially for a subject like this: if you are going to understand someone’s decision to end their life, you really have to step into their shoes and spend that time with them and their families and their friends, to really get a sense of what they’re going through.

Q: All of your subjects have incredibly poignant and compelling stories, but was there anyone in particular that got under your skin?

A: They all did. What really got to me is how people deal with death and the fact that they’re facing an inevitable outcome and a very short timeline. So it was watching the interactions and relationships of the families and friends and seeing within them, and in the things they said to me, how they were coping with it and how it reflected on their own life and their own values, and what they would want for themselves or their loved ones in similar situations. It’s all that reflection and deep thinking that happens in the time before death. That’s really what got under my skin.

Q: What views about assisted death did you start this project with, and how did that evolve after getting to know these people so well?

A: I would say I had a sympathetic view toward it. My mother passed away from liver cancer and she had a very difficult last few weeks. It was a long time ago, it was in 1987, so the chemo and the radiation was pretty intense, she went through some really difficult therapy, and she died at home. We didn’t really have good palliative care, we had a couple of VON nurses, but it left a lasting impression on me as a 17-year-old. I was sympathetic, and I saw the ability to have this in Canada as a good thing.

Where it was a bit of a departure for me is when I started looking at cases like Amy’s [the young Belgian woman with mental illness]. It’s just the most difficult thing: a young person like that. And Amy is so intelligent and likeable, and successful despite all the trauma she experienced. I remember very clearly the first Skype discussion that I had with her when we were talking about whether she would participate in the documentary—I got off thinking, “I can’t believe I just spoke for an hour with somebody who wants to end their life, and she seems like anybody else I would meet at a dinner party or in a café.” She does have severe suffering, but psychological suffering is so difficult for people to see because it’s not visible, and it’s also not a permanent state. Many of these illnesses fluctuate and so I think it’s the most difficult thing for people to comprehend, especially when you see someone so young. It’s a tough one, but learning about her past and what she’s been through and what she continues to cope with, and the number of attempted suicides, I see now why someone in her situation might want this, at least to have that choice.

Q: In the epilogue of the documentary, you say Amy got permission for euthanasia but was working with someone to learn to live with autism. Where do things sit with her now?

A: She’s actually here—she’s in Canada. She’s come for a screening that we’re going to have. She’s publishing her book, an autobiography that will come out on Oct. 9. It’s going to be at first just in Dutch, but it may be translated. So she has the permission but she hasn’t used it. I can’t say anything more than that, because I don’t know. I think having that escape ticket really gives her strength to try a little bit more.

Q: The death of Dr. Roy’s patient, a woman with terminal cancer, I’m guessing was presented the way it was out of concern for privacy and the emotional weight of the moment. But it’s also such an emotionally effective way to present it. What was that like for you as a filmmaker, listening to the audio and processing the material you’ve gathered of such a raw and sacred moment?

A: I think audio can be 10 times more affecting than visuals, because you force people to use their imagination and to imagine what those final moments are like for Danielle Lacroix and her family and Dr. Roy and his staff that are in the room. But I did make a decision early on: there have been lots of films on euthanasia and so many of them have an on-screen death in the film. I just didn’t think it was necessary. For me, it’s not the point. The point is how do you make these important decisions, who do you talk to, what do you want to know, how do you figure it out, how do you balance and weigh things? To me, that’s much more important than the actual act of dying.

Q: What kind of responsibility did you end up feeling to your subjects, how did you define your need to do right by them?

A: It’s always about not pushing them further than they want to go. I don’t ever want them to regret allowing me to film something or to talk to somebody. I’m very careful about how much I push, or how many times I ask for permission about something. At the same time, I want people who see this story to have a complete understanding of what happened. So I think it’s about finding that balance—always being respectful, but at the same time, making sure that their story is fully told.

With Danielle, I wanted her husband and son to see (the scene in which she died) before it went public, so I shared those sections of the film with them. It’s quite affecting, and I don’t want them to see it for the first time when it’s on television or when it’s on the Internet as part of the trailer.

Q: Is there anything else you’d like to add?

A: For me, it’s really important that this film gets people talking about assisted death in its many variations. By that I mean not just terminally ill patients who are a week away from death, but giving access or considering access for people with degenerative, non-terminal or not immediately foreseeable deaths. They’re the people who really brought this forward, and I think we owe it to them to think a little bit more deeply about this before another Supreme Court decision is upon us. It’s important to talk about these things as a society because they’re very important decisions and it really affects the fabric of a society.