Rob Ford begs for another chance after his stint in rehab 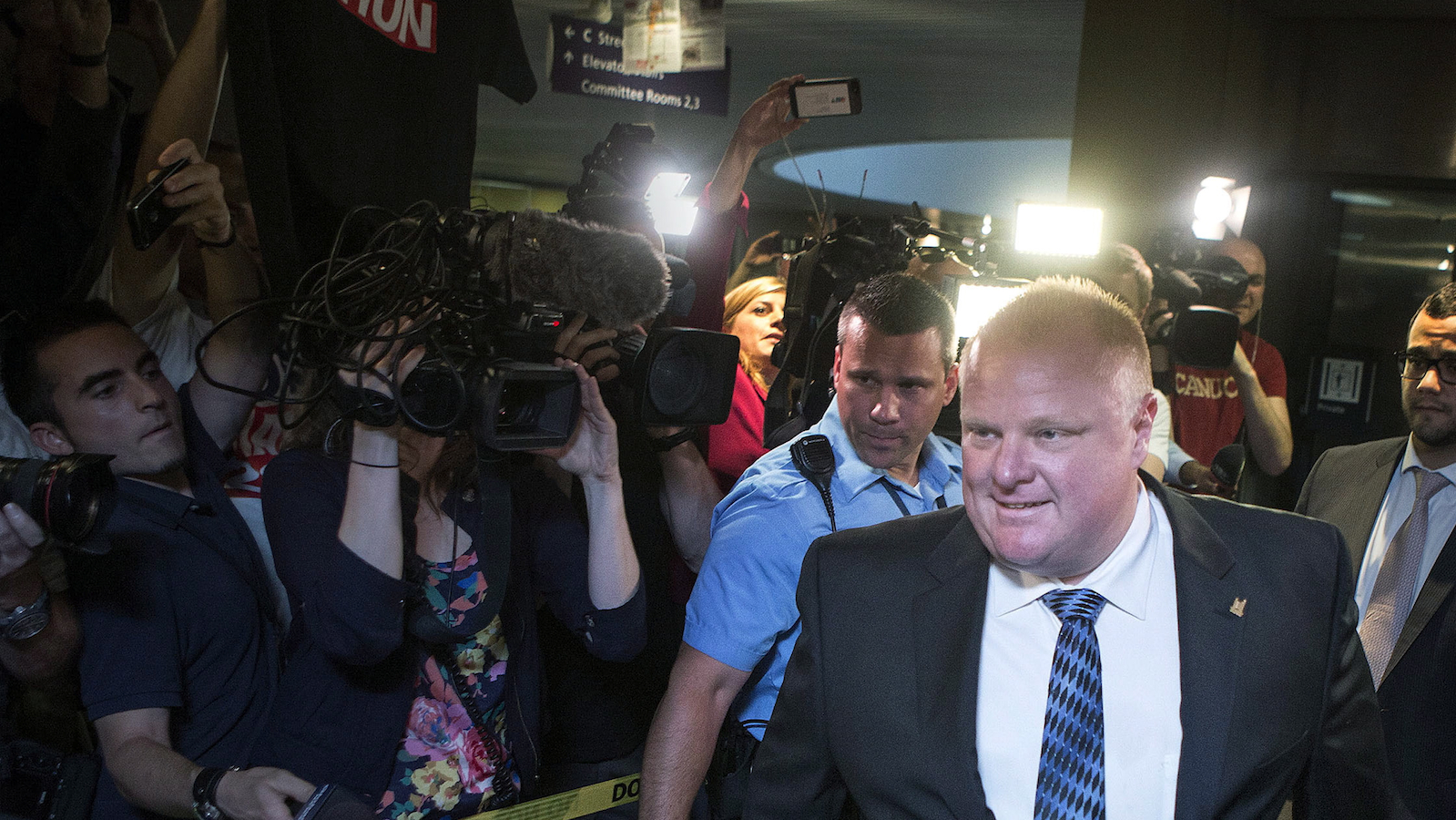 Toronto Mayor Rob Ford is greeted by a media throng as returns to his office at city hall in Toronto on Monday June 30, 2014, after his stay in a rehabilitation facility. (Chris Young/CP)

TORONTO – Mayor Rob Ford ended two months of self-imposed exile Monday when he returned to City Hall from a stint in rehab to resume what mayoral duties he still has, apologizing for his past offensive behaviour, pleading for a second chance, and promising an “unwavering” commitment to living clean.

In a 15-minute statement, Ford spoke passionately of his addictions and his belated realization that they were destroying him.

“For a long, long time, I resisted the idea of getting help,” Ford said. “I was in complete denial. I had become my own worst enemy.”

Ford heaped praise on the rehabilitation facility he entered two months ago for saving his life and forcing him to “confront his personal demons.”

He said he knows he will require treatment for the rest of his life but that getting help has changed his life forever.

“I can proudly say I have begun the process of taking control of my life,” Ford said.

Ford’s role as mayor has been largely symbolic since city council stripped him of most of his power in November following his admissions of alcohol abuse and drug use during “drunken stupors” that came after months of denials — along with offensive and profane comments he was recorded making.

The mayor extended sincere apologies to everyone hurt by his words and actions. It was never his intention to embarrass the city, he said.

Looking back, he said, “I’m ashamed, embarrassed and humiliated.”

The mayor also made it clear he would stay on as mayor and fight for re-election in October.

“I’m also resolved to continue to work harder than ever for the taxpayers,” he said.

With less than four months left in his term, Ford is expected to devote most of his time to his re-election bid.

Ford, whose outrageous behaviour has earned him international notoriety, abruptly left for rehab May 1 after almost a year of insisting he didn’t have a substance-abuse problem and would not take time out for treatment.

Saying he was “blind” to some of the company he kept — he has been photographed with known drug dealers — Ford said those associations were now emphatically over.

Even before his announcement Monday, the mayor was under fire for restricting media access to his announcement — ostensibly for space reasons — and letting it be known through his brother and campaign manager, Coun. Doug Ford, that he would be taking no questions.

His departure in May came just hours after the Globe and Mail said a drug dealer had shown two of its reporters a video of Ford allegedly smoking what was said to be crack cocaine. Around the same time, the Toronto Sun published audio of Ford at a bar making anti-gay remarks, using an ethnic slur, and saying he would like to “jam” a rival female mayoral candidate.

Ford had publicly sworn off alcohol late last year, but was forced to admit he had been drinking in a videotaped incident in January in which he used Jamaican swear words. He called the incident a “minor setback.”

Apart from lingering questions about his substance abuse, Ford is under continuing police investigation after a guns and gangs probe allegedly captured conversations about a video that appears to show the mayor smoking crack cocaine.

Ford’s friend, Alesandro Lisi, has been charged with extortion related to attempts to retrieve the video — initially reported in May last year. Lisi has been committed to trial next year.

Also, Democracy Watch has asked the city’s integrity commissioner to investigate media reports that both Ford brothers allegedly lobbied on behalf of two companies with ties to their family’s label business.

Ford’s stint at rehab in Bracebridge, Ont., came after he apparently tried without success to enter the United States for treatment. Days later, he told the Toronto Sun that rehab was “amazing” and said he was making calls to constituents.

He was also photographed with members of the community during excursions into Bracebridge.