TORONTO – Mayor Rob Ford drew a crowd, both friendly and derisive, as he took in part of Sunday’s NFL game between the Buffalo Bills and Atlanta Falcons at the Rogers Centre.

What started as fans gawking or wanting a picture of the beleaguered Toronto mayor during the first quarter turned into a somewhat unmanageable mob scene under the stands during halftime. Eventually police led him away to an elevator to get him away from the crush.

Through it all, Ford smiled as if it was business as usual. Perhaps it was, given his recent run.

Ford stationed himself with his back to a pillar outside Section 133 and posed for pictures during halftime, flanked by his security minder and a pair of police officers. Soon the crowd swelled with fans holding their cameras in the air, trying to get a snapshot or bodying their way to get closer so they could pose next to the smiling mayor.

“Rob Ford, Rob Ford,” some started chanting, with others adding “Sucks” to the chant.

“Rob Ford for prime minister,” yelled one fan. More than a few responded with “Crackhead.”

“Take a toke,” said another in the crush that had some parents with kids and a woman on crutches gingerly trying to work their way through the crowd to get back to their seats.

More people led to more police officers and soon a smiling Ford was ringed by dozens of fans. Some wondered openly why the rush to have their picture taken with the disgraced municipal politician whose bizarre antics and self-admitted misbehaviour have drawn worldwide attention.

Some just seemed to want their picture with the man at the middle of the sordid scandal.

Ford was eventually led away by a phalanx of a half-dozen police officers plus arena security to a nearby elevator as a small group of fans brandishing cellphone cameras followed.

Adding to the circus-like atmosphere were several tweets from Canadian musician Matt Mays, who said the mayor was in his seat. 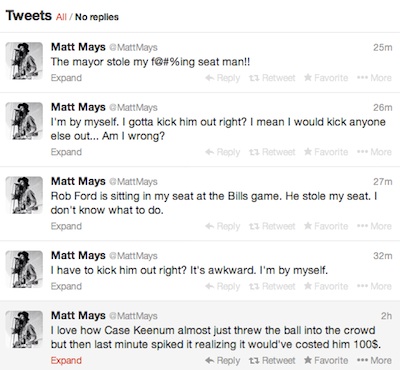 “Rob Ford is sitting in my seat at the Bills game. He stole my seat. I don’t know what to do,” tweeted Mays, whose Twitter account is verified.

“I have to kick him out right? It’s awkward. I’m by myself,” he said in another tweet.

“Got my seat back,” Mays said by way of update in a later tweet, presumably after the mayor departed.

Ford arrived during the first quarter and his presence was quickly felt. Within seconds, a lineup of fans with cameras was in the aisle as the mayor took his seat at the top of the lower tier of a VIP section on the west side of the Rogers Centre.

Ford, a big football fan and former high school coach, smiled and shook hands as security and police tried to keep the aisle beside him clear. Ford was wearing a Buffalo Bills jersey with Fred Jackson’s No. 22 on it.

“He’s not working. He’s here to see the game,” said a Rogers Centre security official as he tired to shoo a reporter away.

Ford sat in an aisle seat, with an empty chair next to him. His security man was two seats away while the Rogers Centre security official sat on the arm of the seat in front of the mayor, trying to shield him from curious fans.

Those who made past the security guard looked only to shake hands and exchange a few words with Ford, who watched the game while consulting his program or chatting with his towering security man.

Several police officers were stationed at the top of the section.

Ford also took in the CFL Eastern Conference final at the domed stadium several weeks ago and was surrounded by people who wanted to take his picture or shake hands.

He has spent months in the media limelight as a result of revelations of smoking crack cocaine and appearing drunk in public.