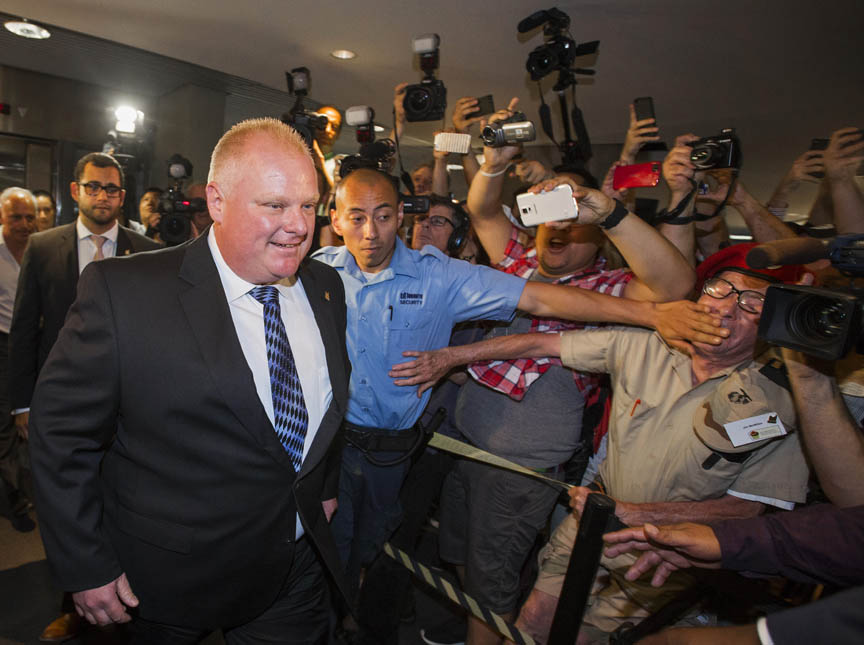 TORONTO — Rob Ford is in hospital receiving care that is “palliative in nature,” his family said Monday as the former Toronto mayor continues his battle with cancer.

The 46-year-old politician has not, however, been transferred to a palliative care unit, although his family is by his side around the clock, a spokesman said.

“The treatment that Councillor Ford is receiving is palliative in nature,” Dan Jacobs said in a statement on behalf of Ford’s family. “Part of his palliative care includes sedation, which is also an element of the team’s pain management.”

Ford was diagnosed with cancer in September 2014, less than a year after he confessed to smoking crack while in one of his “drunken stupors.”

The illness forced him to withdraw his bid for re-election as mayor and he ran instead for a seat on city council, winning in a landslide despite his notoriety.

Ford’s term as mayor featured a series of headline-grabbing antics, including slurs against minorities, lewd remarks about his sex life and his admission of crack cocaine and alcohol abuse.

His fight against cancer has drawn messages of support from a number of politicians and the public, including those who used to disagree with him in the past.

He has had a total of nine chemotherapy treatments so far. Late last week, his family released a statement saying he was going through a “difficult time.”

Jacobs said doctors have been “very concerned” with the reappearance and progression of Ford’s cancer and have been clear that he “still faces challenges.”

“But everyone is hopeful that his body will be able to fight back enough that he can then undergo further treatment,” he said.

Jacobs noted that Ford is now resting comfortably “thanks to the efforts of his medical team.”

The Ontario Medical Association describes palliative care as treatment that focuses on relief of pain and other symptoms which “creates a positive experience to replace suffering and pain in order to provide dignity at the end of life.”