'I guarantee: In four more years, you're going to see another example of the Ford family never ever giving up' 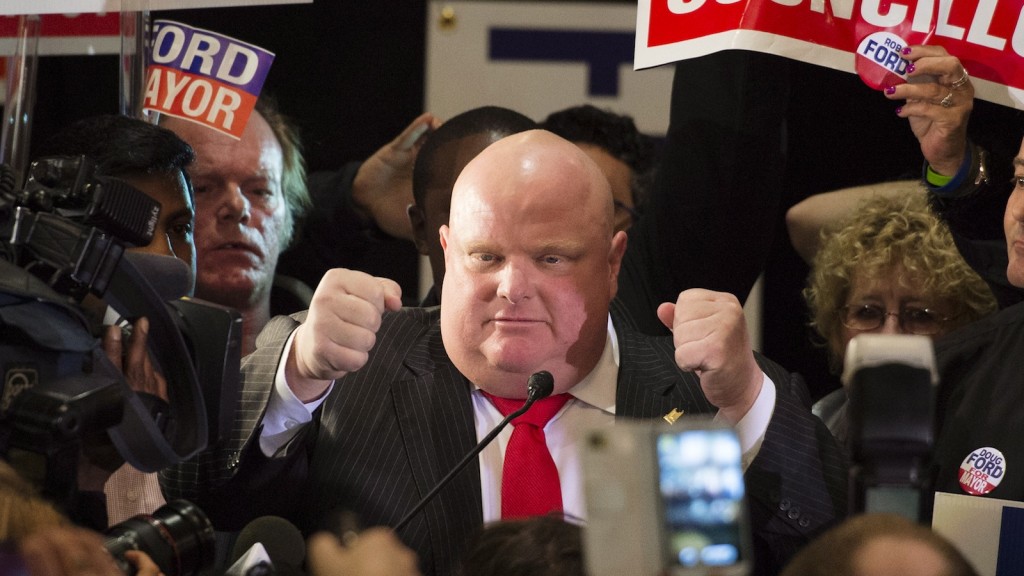 TORONTO – A weakened but still defiant Rob Ford conceded little Monday even though his Hail Mary attempt to pass the mayoral torch to his older brother Doug Ford was easily shut down by businessman and former provincial politician John Tory.

The notorious outgoing mayor, who easily won as councillor in his west-end ward, promised both cheering and weeping supporters the Fords would not be going away.

“I guarantee: In four more years, you’re going to see another example of the Ford family never ever giving up,” Ford said. “We’re just warming up.”

In hopes of keeping the “Ford Nation” flag flying over city hall, Doug Ford stepped into the mayoral race last month after cancer forced his disgraced brother to give up his bid for re-election.

“My brother did an absolutely phenomenal job,” the mayor said.

Although millions of people cast ballots in civic elections across Ontario, most eyes were on the vote in the country’s largest city thanks to Ford, who remains in office until Tory is sworn in Dec. 1.

Ford’s admissions of smoking crack cocaine in a drunken stupor, his profanities and offensive behaviour garnered national and international headlines. The antics also made him the butt of late-night television jokes.

Ford, who is returning to hospital for another round of tests on Wednesday, spent much of the day stumping for votes in his ward.

In all, 65 candidates had vied to succeed him as mayor, but polls consistently showed voters would choose a winner from among Tory, Doug Ford and Olivia Chow, widow of former New Democrat Leader Jack Layton.

Tory, 60, had campaigned on the promise of a new era of co-operation after the divisive Ford years. The former CFL chairman and senior telecommunications executive, who pledged a return to stability and civility at city hall, ended the day with about 40 per cent of the popular vote.

“The people have spoken and tonight we begin the work of building one Toronto,” Tory, who congratulated Ford for his council-seat win, told delirious supporters.

“Torontonians want to see an end to the divisions that have paralyzed city hall for the last few years. I hear you.”

Chow, 57, who began the race as perceived front-runner and campaigned as the “only progressive” candidate, failed to capitalize on her initial popularity and appeared to fall victim to those determined to ensure the end of the Ford era. She ended up with 23 per cent of the vote.

“So many people, they’ve just had it with Rob Ford. It’s just really…a vote for anybody but Rob or Doug Ford,” said city resident, Jon Arnold.

“If we’re going to be a serious major-league city, we can’t have a guy like that in office.”

Doug Ford, 49, who only joined council four years ago, had tried to cast himself as the natural successor to his brother — while also distancing himself from the excesses.

Myer Siemiatycki, a political science professor at Ryerson University, said Tory’s victory signals a city returning to political normalcy after several years of unprecedented scandals that will live on now in “lore and legend.”

As for the newly minted councillor, Siemiatycki said the next election would start immediately.

“It will be permanent election season as far as he is concerned,” Siemiatycki said of Rob Ford.

“His prime mission in sitting on city council will be to position himself for a mayoralty run in 2018. There may be yet another sequel coming in this political drama — or farce.”

In all, about 1.6 million city residents were eligible to vote at 1,679 polling stations. Preliminary figures indicated more than 60 per cent turned out to vote — far more than the 50 per cent who cast ballots in 2010.

While the race to replace Ford drew the most attention, Toronto wasn’t the only city replacing a controversial incumbent.

In London, Matt Brown succeeded Joe Fontana, who resigned as mayor this summer after he was convicted of government fraud for forging a cheque when he was a Liberal MP.

In Brampton, Susan Fennell lost her job as mayor to Linda Jeffrey after an audit found more than $172,000 dollars in expenses that breached city policies.

In northern Ontario, fallout from the deadly collapse of a shopping mall roof in June 2012 proved fatal to the re-election hopes of Mayor Rick Hamilton, who was soundly thrashed by the winner, Dan Marchisella.