Robin Camp testimony: Eight things we learned about the judge

Robin Camp is sorry, has taken training to recognize his bias—but still can't explain his most controversial comments 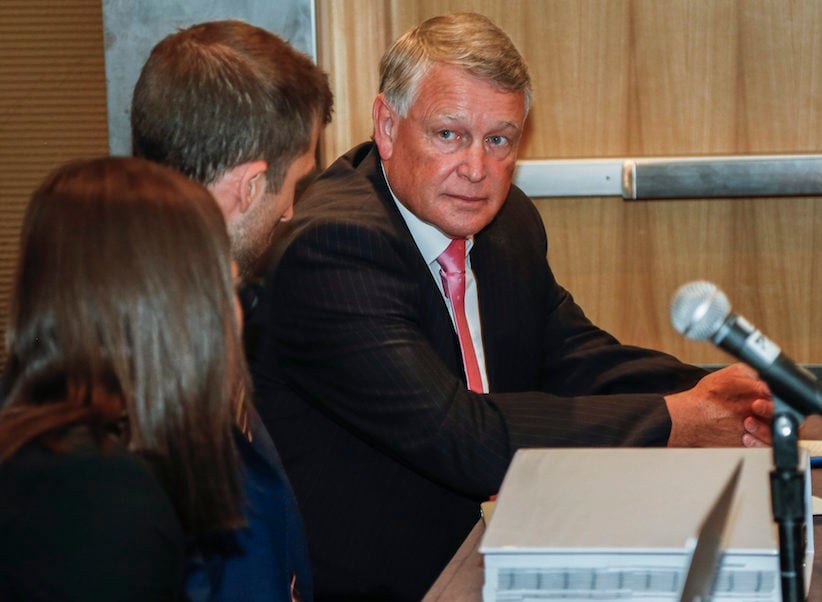 He took long pauses during tough questions, stumbled over a point he wanted to drive home, and fiddled with pages in the large exhibit binder in front of him. In some ways, Justice Robin Camp was like any well-dressed and uncomfortable witness that he’d seen hundreds of times in his own courtrooms. But Camp’s roughly three hours of testimony at his Canadian Judicial Council inquiry were a remarkable and rare occasion of a judge under examination and cross-examination, being forced to account for his own actions and words—namely, several offensive comments to a complainant and Crown prosecutor at a sexual assault trial he handled.

Without doubt, the judges and lawyers on the five-person inquiry will heavily consider his comments on the stand Friday, just as they will weigh his words from the bench at the 2014 trial of Alexander Scott Wagar, when he asked the complainant: “Why couldn’t you just keep your knees together?”

MORE: What’s at stake in the case of Justice Robin Camp

Here are some key things the public has now learned about Justice Robin Camp, who sits on the Federal Court of Canada but cannot hear cases pending the inquiry’s debate about whether he should be removed from the bench:

After his comments in the Wagar trial were aired publicly—and the Alberta Court of Appeal overturned his acquittal, saying he bought into rape myths—Camp apologized in a November news release from the Federal Court. He also apologized in December in a letter to the judges’ council, and then for a third time Friday:

The person I most want to apologize to is the complainant. I can see she’s a fragile personality. Her background has not been easy. Her life has not been easy. [She was a homeless Cree 19-year-old woman with substance abuse issues at the time of the alleged assault.] And I was rude and insulting. By extension, I have caused unhappiness among other people, mainly women and some men who have been sexually abused. I’m sorry about those. Canadians deserve better of their judges.

I must apologize to the judiciary of this country. I’ve made a difficult role of the judge, each judge in this country more difficult and I’m sorry for that.

Lastly, Camp apologized to his family, and thanked them for continuing to love him throughout this saga. He’s been accompanied each day of this week’s inquiry by his wife and daughter—who wrote a letter herself which said she had herself been raped, had found her dad’s comments at the Wagar trial disgraceful, but understood he had undertaken self-improvement and that he was no misogynist.

2. Camp has little explanation for his “knees together” comment, except that he was being provocative.

Asked about that most widely quoted of his inflammatory comments, Camp said:

At a visceral level, I think it was effective. That is the only explanation I can offer to myself … I’m not an articulate man.

He said he sought training later to help him realize his instinctive biases. Pressed to explain what prejudices he had, Camp explained: “The prejudice that women all behave the same way, and that they should resist.” Marjorie Hickey, the lawyer who cross-examined him, asked if he’d accept that.

Hickey: “You don’t need knowledge of the myth, you don’t need sensitivity training to know that the kind of language that you use as we just described is hurtful, it’s humiliating, it’s crass, and can only re-victimize a complainant.”

Then, Hickey prompted the judge to acknowledge he’d again used such thinking in his oral decision, weeks later. “To my sorrow, I made that mistake a second time.”

3. Camp pledges he’ll be a better judge after his training.

In the inquiry’s two previous days, Camp’s lawyer called up a law professor, a judge and a psychologist—all of them female—who each spent several sessions discussing Camp’s biases with him, as well as sexual assault law, context and myths. He says it will make him a better judge, one not prone to such mistakes when it comes to sexual assault:

I was subject to prejudiced thinking, certainly in this area … I now know enough to question every question that I ask and every thought that I have. I can’t guarantee that I’m not prejudiced in other areas. I don’t think that anybody can. What I have learned is to be constantly vigilant against it.

4. Camp had limited training, but could have had more.

Camp maintained there was no training on sexual-assault law or trials for new judges, though the initial package provided to judges, with available courses, comes with a guide on trial conduct—including rape myths. The cross-examining lawyer noted that other judges routinely keep that text on their laptop as a resource, but he does not. Assistant Chief Justice Deborah Smith of Nova Scotia, an inquiry panellist, pointed out to Camp that he had funding and time off for courses, that several were available to him, and that he also had expansive libraries and advice from his judicial colleagues at his disposal.

“I think it’s become apparent that I didn’t know what I didn’t know,” he conceded. Camp added that the majority of his criminal cases involved impaired driving or other crimes. He’d had one sexual assault trial before Wagar, and it lasted a couple of days, in addition to preliminary inquiries and sentencing hearings for guilty pleas.

5. Camp did continue to make one mistake during his own testimony.

Although it wasn’t one of the allegations against Camp, his lawyer Frank Addario asked the judge about the times he errantly referred to the complainant in the Wagar case as “the accused.” It was a slip, he says, one he often makes with people or things. He’s called the dishwasher the washing machine, and once in court called an investigating police officer by the name of the case’s accused.

Then, on a couple occasions, the judge repeated the error in testimony.

Camp: “The thing I feel worst about is the questions I asked of the accused … That was unforgivable.”

Addario: “You mean the accused or the complainant?”

Addario: “You made that mistake again?”

Camp: I realize that.

6. He doesn’t think of himself as sexist.

During questioning, Camp agreed he has a gender bias he didn’t realize was there—but he’s not sexist, in that he might have applied the same rape myths about a man resisting sexual assault:

I think that my thinking isn’t really sexist, but just old-fashioned. I would have applied the same thinking to a male complainant.

7. He was fatherly and dispensed caring advice … toward the accused.

Under questioning from Newfoundland Chief Justice Raymond Whalen, another panellist, Camp agreed that he was giving Wagar, the homeless man accused of sex assault in the case, advice akin to a father-son exchange about respecting women, and consent. That conduct formed one of the allegations against him, that in court he addressed the accused in a way that belittled women. To wit, from the Wagar trial:

Camp told the inquiry those words were a “ham-handed” way of offering advice to a man he presumed had received little such guidance in his life.

8. Camp believes the judicial council can restore public faith in his conduct.

The judicial council must consider whether public confidence in Camp is so impaired after this episode that he cannot continue as a judge. Camp reasoned that their recommendation itself will affect that public confidence:

Hickey: “Isn’t it a problem for women who may appear before you in the court that you’ve been described as holding sexist attitudes and a gender bias?”

Camp: “I can see the perceived problem. If the council sees fit to permit me to keep sitting, that should signal to the public that I am not such a person.”

On only two occasions has the Canadian Judicial Council recommended the government remove a sitting judge. In both those cases, the judge resigned before a vote in Parliament.