Roméo Dallaire, commander of an ill-fated UN mission in Rwanda, on the un-Canadian response to refugees and the missed opportunities for intervention 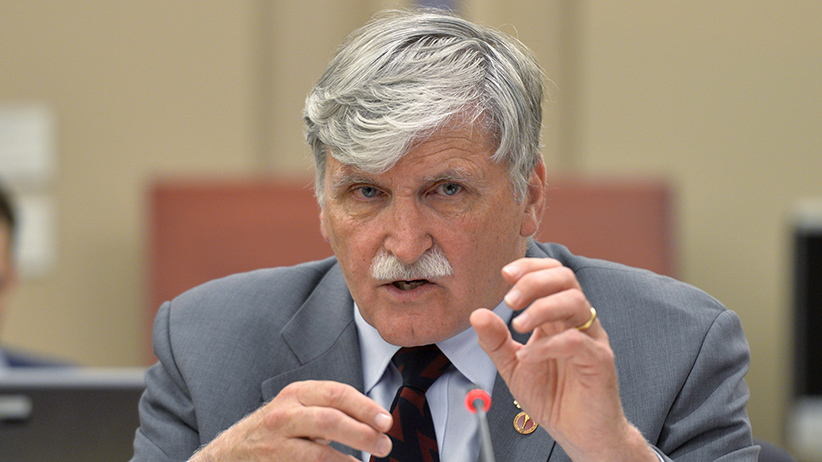 Liberal Sen. Romeo Dallaire, best known in Canada as the former commander of the UN’s ill-fated peacekeeping mission in Rwanda, is seen at Senate caucus in Ottawa on Wednesday, May 28, 2014. (Adrian Wyld/CP)

On Monday, Canadian Lt.-Gen. (ret.) Roméo Dallaire added his voice to those calling for Canada to accept far more Syrian refugees than it has committed to take in. “I think that Canada and its decision so far in regards to refugees is nothing less than atrocious and totally foreign to what and who we are,” Dallaire, who commanded the UN’s force in Rwanda during the 1994 genocide there, said in an interview with Maclean’s.

Canada, he said, could easily take in 70,000 of the approximately four million Syrians who have fled the country, and the civil war that has torn it apart, since an uprising against dictator Bashar al-Assad began in 2011. Another 7.6 million are displaced within Syria itself.

Canada has so far accepted only about 2,400 Syrian refugees. Prime Minister Stephen Harper’s Conservative government in 2013 promised to settle 1,300 Syrian refugees in Canada by the end of 2014. That pledge wasn’t fulfilled until earlier this year. In January, the government promised to accept an additional 10,000 by the end of 2018. While campaigning last month, Harper said Canada would bring in another 10,000 Syrian and Iraqi refugees by 2019.

Dallaire said that isn’t enough. “If a country like Sweden can take in 100,000, then we’ve got some real serious problems with our philosophy and what we believe in our values of humanity and sense of humanity.”

Dallaire was appointed to the Senate in 2005 and sat as a Liberal, although Liberal Leader Justin Trudeau removed Liberal senators from the party caucus in January 2014. Dallaire resigned from the Senate in June 2014, seven years before reaching the mandatory retirement age of 75, to focus on other work, including research on post-traumatic stress disorder, from which he suffers, and an initiative to end the use of child soldiers. He says he’s no longer involved with the Liberal party, but did spend one day campaigning with Liberal candidate Allan Thompson as a personal favour.

Related: Our in-depth primer on Syrian refugees, one of the 13 big campaign issues

He recalls, as a soldier decades ago, seeing Vietnamese refugees on Canadian military bases, part of the influx of some 50,000 so-called boat people whom Canada settled in 1979 and 1980. “We know we need immigrants to keep this country going. The Vietnamese have proven to be an extraordinary asset,” he said, and so have Hungarian refugees, 30,000 of whom came to Canada following the failed 1956 revolution against Soviet rule in that country.

Dallaire, who has visited with Syrian refugees in Jordan, believes they would similarly benefit Canada. “This is a middle-class society. These are educated people. This is a different scenario from a number of other refugee cases and conflicts that we’ve seen. This is an asset that we can be gaining from.”

He also expressed frustration with the world’s response to the war in Syria that is driving so many of its residents to flee. “We still seem to sit there and hope we can get away with doing the least possible and hope the thing will disappear,” he said. “I don’t see how we can continue to simply let this conflict continue to fester and create more and more casualties. There’s a hypocrisy in regards to human rights and treating all humans as equal when you’re letting this campaign continue.”

Related: Q&A with Michael Molloy, the Canadian who delivered the ‘boat people’

Dallaire said he advocated international intervention during the first six months of the war under the doctrine of “responsibility to protect,” which holds that the international community has a duty to intervene when a state fails to protect its citizens from atrocities such as ethnic cleansing and genocide. Now, he says, the war has become increasingly complex and urbanized, which would make a military intervention to protect civilians more difficult. If there is to be intervention, he believes regional actors, rather than the West, should lead it.

The original report on responsibility to protect, drafted by the International Commission on Intervention and State Sovereignty, recommends that intervention only be considered if the chances of success are reasonably high. Dallaire believes that criterion is unlikely to be met in a West-led mission.

Canada is currently part of an international coalition that is targeting the so-called Islamic State jihadist group, but not Syrian regime forces. Canada is conducting air strikes against the group in Iraq and Syria, and is training Iraqi Kurdish forces on the ground in Iraq. Dallaire is not convinced air strikes are an effective tool against Islamic State, but believes training local forces can be beneficial.

Counterpoint: David Frum on why Syria’s refugee crisis is having its ‘Princess Diana moment’