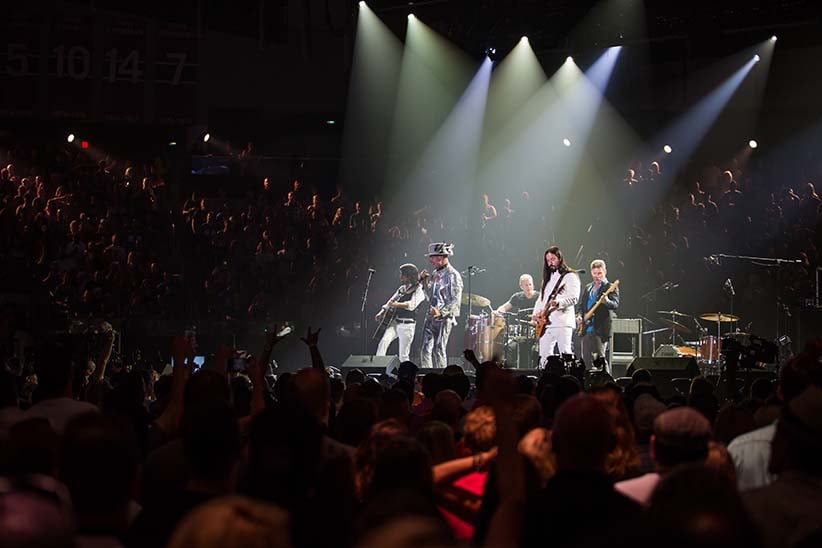 Gord Downie had one rule about performance. No two shows can be exactly the same.

When Jennifer Baichwal and Nicholas de Pencier introduced their new movie Long Time Running last month at the Toronto International Film Festival, Jennifer explained that Gord had only one request of their documentary unit: “Tell me something different. Show me things not seen before.”

Talent cannot originate. Genius must. Gord was a genius, just like us, only more so. In the movie, Gord explains the greatest pleasure of his life, the end of the day, sitting fireside with all his writing tools gathered around.

When I introduced the Tragically Hip’s final concert on Aug. 20, 2016 in Kingston, ON, I had roughly 90 seconds. The band was in their hometown, I was in Rio covering the Olympic Games and fans were camped out at viewing parties across Canada. I spoke of my favourite song, “The Wherewithal,” and how it reminded me of Samuel Johnson, the greatest of all literary critics.

I wanted to honour all five members of the band, and I did, but within the 90 seconds, and knowing the situation, I really wanted to connect Gord with the subject of his genius and his art — his writing. Johnson wrote The Lives of Poets, and he wrote The Vanity of Human Wishes. Johnson studied his grand forerunners and concluded, “Since genius, whatever it be, is like fire to the flint, it can only be produced by collision with the proper subject.”

There lurks in all of us, in every known heart, a desire of distinction. First a hope, then a belief, that nature has given us something peculiar to ourself. This vanity helps one nurse aversions, and act on desires. In time, feelings rise up in the form of art, and the power and affection improves by habit. Then comes the real test: How to tame the tyranny of such vanity.

This is what I so loved and admired about Gord.

In his aesthetic and intellectual ambition was this humble genius, who worked so hard, but who in the end was as eager to plant a kiss, as any seed. I feel blessed to have attended the first tour stop last year in Victoria. You can imagine the suspense. How will Gord look? He looked amazing. What song will they play first? “Boots or Hearts” was the answer. Boots or frickin’ hearts.

“Like boots or hearts, oh when they start
They really fall apart.
See when it starts to fall apart
Man, It really falls apart”

After the show we shared a beer back at The Empress in the hotel bar. Gord, his brother Patrick and I talked about my return to Hockey Night in Canada as what you might consider, leader of the band.
Gord gave me marching orders.

“Ron, you will do a great job if you remember to focus on elevating Nick, Kelly and Elliotte.”

We spoke about Don Cherry and the Boston Bruins. Gord knew their names. All of them. He could not recall his own lyrics, but when it came to our NHL telecast, his memory was crystal clear. That’s why in the new movie Long Time Running there was a moment I was torn to pieces by Gord’s struggle with memory loss.

It was a moment about the value of words. While I was in Rio battling with my nerves and pondering the message I would deliver to introduce the final concert in Kingston, at that very same moment, thousands of miles away, Gord was doing his own self-talk as he prepared to take the stage.

“Two words,” Gord was saying quietly to himself. “I only have to remember two words — First Nations.”

Gord’s rule about a fresh performance, in this, his final performance, was based on a fresh start, a new narrative for Canada. This was not about sympathy, it was about rights. Gord’s art. He was using his final show to tell us how to free ourselves from our attitudes. To change policies conceptually and financially. None of us should forget those two words. Just as we will never forget the show.

I did my little intro from Rio, and then Gord hit the stage grabbing his silver torch — the microphone — while sporting polished shoes and a JAWS T-shirt.

I then thought of that star upon the stage in his own favourite moments, fireside with pen in hand.