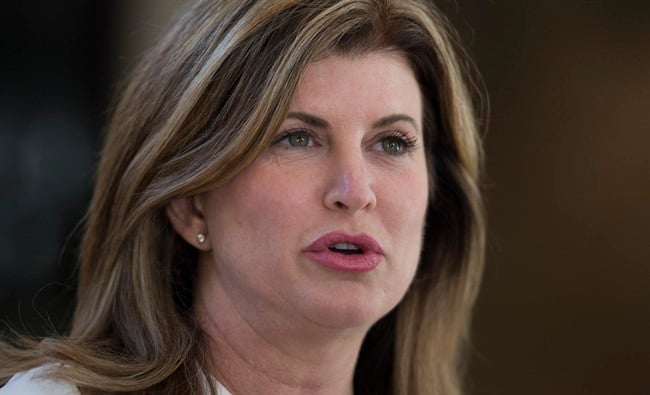 Opposition leader Rona Ambrose speaks with media following the burial of former President Shimon Peres in Jerusalem, Israel, Friday September 30, 2016. Ambrose is not about to let herself be outdone when it comes to promoting the rights of women and girls on the world stage. (Adrian Wyld/CP)

OTTAWA – Rona Ambrose is not about to let herself be outdone when it comes to promoting the rights of women and girls on the world stage.

Prime Minister Justin Trudeau created some buzz last week when he welcomed United Nations goodwill ambassador Emma Watson — a celebrity feminist and British actor best known for her role in the Harry Potter movies — to Parliament Hill, where she congratulated him on bringing gender parity to his cabinet appointments.

Now Ambrose, the interim Conservative leader, is heading to Birmingham, U.K. this week for the British Conservative Party conference, where about 11,000 delegates are gathering to talk about the future of the political party.

There will be much attention paid to Brexit — the British departure from the European Union — and what British Prime Minister Theresa May plans to do about it.

But Ambrose says her mission is to focus on global efforts to end human trafficking, violence against women and sexual violence in conflict zones.

The particular group of women and girls that Ambrose wants to highlight the most is the Yazidis, a Kurdish minority group who are fleeing persecution by Islamic militants.

“Not all leaders care about women and girls — that’s the bottom line,” Ambrose said in an interview.

“I am deeply passionate about it. I did this before I got into politics. I’ll do it when I get out of politics, but while I have a voice that has influence, I am going to use it, whether it is in Canada or internationally,” said Ambrose, whose Conservative party will choose its new leader next May 27.

During the conference, Ambrose will take part in a panel on freedom and democracy hosted by Colin Bloom, the director of outreach for the U.K. Tories, and plans to connect with May, former British prime minister David Cameron and Foreign Secretary Boris Johnson.

She will also be speaking with former British foreign secretary William Hague, Lady Arminka Helic, the Bosnian-born British baroness who is a close confidante of actress and human rights activist Angelina Jolie, and Dutch Princess Mabel.

Ambrose said she wants to highlight the case of UN goodwill ambassador Nadia Murad, a young Yazidi activist who escaped slavery by the Islamic State of Iraq and the Levant and, represented by prominent human rights lawyer Amal Clooney, wants to bring them to justice.

“These things need momentum. They need people to support them and if we don’t speak out and use our voices’ influence, these things will never happen,” she said.

“I do believe it takes strong women leaders to move these things forward.”

Ambrose spearheaded a successful effort to get the UN to adopt a resolution recognizing the International Day of the Girl Child when she was minister for the status of women.

She also blasted the Liberals for deciding not to vote in favour of a Conservative motion in June declaring that the violence perpetrated by ISIL constitutes genocide.

The Liberal government accepted the label later that month, after a UN report used the term to describe the atrocities committed against the Yazidis, but Ambrose noted that last week the Conservatives were unable to get unanimous consent to once again bring their motion to a vote.

“I think it is shameful because the message that it sends to these women and girls who have been burned alive, sold as sex slaves, continue to be murdered, raped, (is) that they don’t matter, and that’s the bottom line,” Ambrose said.

Trudeau has dismissed the motion as partisan games.

“It is a real shame to see the extent to which people are willing to play politics with the lives of the most vulnerable people in the world,” Trudeau said last month when asked about it during question period.

“We’re not trying to wedge them. We’re trying to get them to vote for it, and they didn’t,” she said.