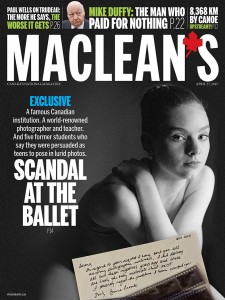 “We have come to a decision that the individual will no longer be associated with the RWB,” executive director Jeff Herd wrote in a release early Thursday morning. “We cannot comment on any of the allegations or stories that are currently circulating in the media. What we do know is that there is an investigation and we are fully co-operating with the authorities through the process.”

The school placed Monk on paid administrative leave in January after police informed Herd that a faculty member was under investigation. On Tuesday, the ballet cut ties with Monk.

In a Maclean’s investigation spanning six months, four women alleged that Monk photographed each of them, when they were teens, while nude or in various states of undress. They’re now concerned where those images may have ended up.

Maclean’s contacted Monk repeatedly in the course of its investigation, including via a letter sent by registered mail that laid out in detail the allegations contained in this story. Monk has refused to comment on the complaints by the former students and, last week, wrote in an email: “On the advice of my attorney, I have no comment on any of these ridiculous allegations.”

Read the full story in our latest issue, available to tablet and mobile readers with a free 30-day trial of Next Issue. You can also download this issue for free on Apple Newsstand and Google Play. Our cover story will appear on macleans.ca later this week.