Who's the victim? Is there a conspiracy? Is the brother to blame? The Liberal MP and her bulldog lawyer put on quite a show. 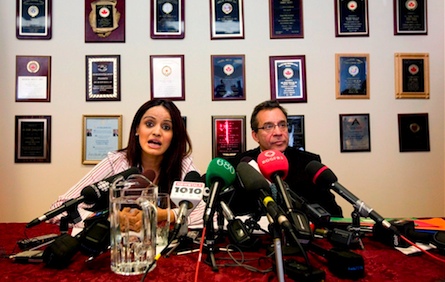 As theatrical spectacle, Ruby Dhalla’s surprise press conference this afternoon didn’t deliver anything close to satisfying catharsis. But it did exactly what it needed to do. The Liberal MP for Brampton-Springdale and former Bollywood film star stuck mostly to script, denouncing charges made early in the week that she mistreated immigrant workers in her family’s Mississauga, Ont., home as “false and unsubstantiated.”  “I have always been a champion of women, of immigrants, of new Canadians,” she said.

Of course, it is precisely Dhalla’s political identity as a champion of immigrants and women’s rights that made the allegations so juicy when they broke earlier this week. It was as if Canada finally had its own Eliot Spitzer, the great moralizer who was taken down by a hooker. Dhalla’s website describes her as “the daughter of immigrant parents,” someone “sensitive to the challenges encountered by new Canadians.” It also expresses her dedication to women’s rights: “Raised by a single mother, Dr. Dhalla recognizes the many obstacles women face in their careers and daily lives and is committed to recognizing their hard work, vision and commitment.”

Allegations made by two women hired as nannies for the politician’s mother that came to light earlier this week threatened to detonate that image. They claimed that they earned $250 a week working 12- to 16-hour days at the Dhalla family home, that Dhalla herself had seized their passports and that other family members made them wash cars, shovel snow and clean chiropractic clinics owned by the family. Dhalla acted swiftly and stepped down from her position as youth and multiculturalism critic in the Liberal shadow cabinet and requested a review by the Ethics Commissioner. Ironically, a Commons committee report tabled the same day found the federal live-in caregiver program designed to help immigrant workers actually “places the live-in caregiver in a disadvantaged position, dependent on her employment for more than her livelihood.”

Then yesterday, a third woman, Lyle Alvarez, came forward with allegations Dhalla promised she would try to help her stay in Canada as a live-in caregiver if she passed a tryout as a homemaker—a grueling schedule of long hours scrubbing floors, cleaning clothes and shining dozens of pairs of shoes. She quit after nine days and was paid $370, a sum that works out to less than $3.50 an hour.
As for today’s histrionics, they were well supplied by Howard Levitt, the Toronto employment lawyer representing Dhalla. Levitt blustered, railed against the press, proffered signed receipts for wages that contradicted claims that they had not been paid, Dhalla’s boarding passes that proved she had limited exposure to the workers and letters from a cleaning service used at the family’s chiropractic clinic that claimed it did all of the cleaning.

His boldest move, however, was to recast Dhalla from alleged victimizer of immigrant labour to “the victim in all this.” Her brother Neil Dhalla was hung out as the “employer.”   “She wasn’t the person for whom care was being given,” Levitt said of Dhalla. “She gave them no instruction.” He made vague, ominous references to a vast conspiracy out to ruin his client’s career. “They’ve made a grievous error,” he intoned.

Dhalla’s bulldog lawyer was introduced just as Agatha Mason of Intercede, a Toronto agency that assists domestic workers, corroborated one of the nannies’ stories: she said she contacted Dhalla on her behalf, and insisted that she give her passport back within 24 hours or they’d contact police. Mason said she didn’t know at the time that she was dealing with a federal politician.

Dhalla’s lawyer’s no-comment order gives the politician an out from appearing before next week’s Commons immigration committee to study migrant workers, an event perfectly timed to deflect attention from Mulroney’s testimony at the Schreiber inquiry. It promises to be a circus. Former Dhalla employees have been called to testify. Conservative MP David Tilson, the committee’s chairman, has said he might call Ontario Labour Minister Peter Fonseca and Education Minister Kathleen Wynne who are now embroiled in their own sub-scandal for not acting when they first heard the complaints made against the Dhalla family in late April.

That was at a gathering of 150 caregivers, mostly from the Philippines, convened to support a private member’s bill introduced by Liberal MPP Mike Colle calling for the licensing of all foreign-worker recruitment agencies and a ban on collecting fees from workers brought here. Their stories were heart-wrenching: One woman testified the dog of the family she was working for bit her three times but she wasn’t allowed to seek medical help. When she decided to quit, her employer wanted her to sign a paper that said the family wasn’t responsible for the dog attacks. “I was told I won’t get the record of employment or T4 if I didn’t.” She didn’t sign and didn’t get the papers.

Today, Dhalla, ever the politician, promised to lead reform to the laws protecting caregivers. More politically savvy was the unusual absence of any reference to the party where Dhalla was once a rising star. No red Liberal signs, no photograph of her celebrating Michael Ignatieff’s coronation at the Liberal convention by his side. Dhalla, who showed up at that convention in a white stretch limo, is known to thrive in the spotlight. Which is why, contrary to her lawyer’s wishes, she had to have the last word. She asked Canadians to hold their judgment and asked for privacy for her family. “When the facts and truth come forward true victory will be achieved,” she said. Before then, one way or another, a political scandal—one that takes our eyes off of the women who are the real victims out there—is inevitable.