Three of four British sailors charged with sexually assaulting a woman in Halifax have applied for changes to their bail conditions to allow them to return to the U.K. 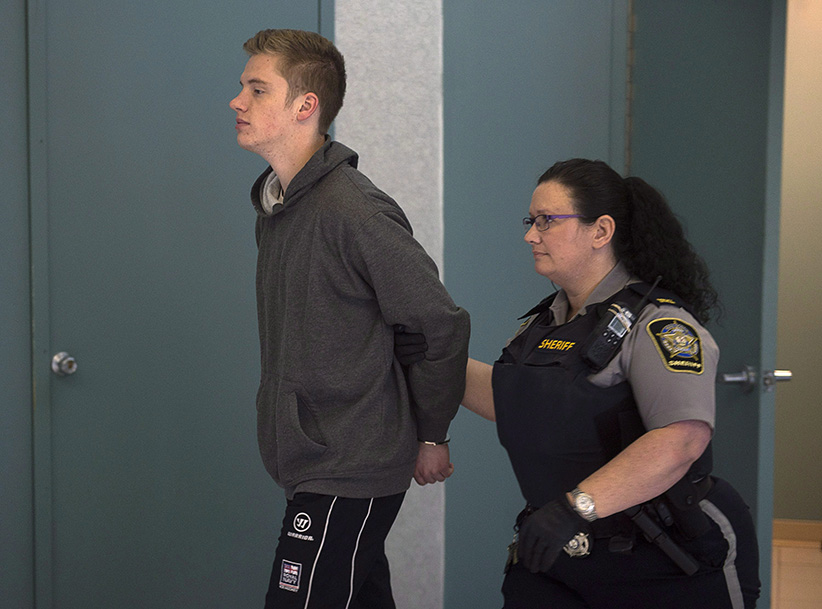 Craig Stoner, one of four members of the British navy in Nova Scotia for a hockey tournament, is escorted at provincial court in Dartmouth, N.S. on Monday, April 20, 2015. The men face charges of sexual assault following an alleged incident at a Canadian Forces base in Halifax. The conditions of their release require them to reside at CFB Stadacona in Halifax, to provide $3,000 in cash as a surety and to return to court on May 27. (Andrew Vaughan/CP)

HALIFAX – A judge has adjourned a hearing until Wednesday for three of four British sailors who are seeking a change in their bail conditions after being charged with sexually assaulting a woman in Halifax.

The men want to return to the United Kingdom pending a preliminary inquiry scheduled for five days next April in Halifax provincial court.

Simon Radford, Joshua Finbow, Craig Stoner and Darren Smalley were in Nova Scotia to play in a hockey tournament with local Armed Forces personnel when they were arrested in April.

But Crown attorney Scott Morrison said outside court Tuesday that he has concerns about allowing the men to leave Canada.

Lawyers for the three men declined comment after the case was adjourned Tuesday in the Supreme Court of Nova Scotia.

A publication ban was placed on what was heard in court.

The Crown alleges the members of the Royal Navy participated in a “group sexual assault” on April 10 inside a barracks at CFB Shearwater, a Halifax military base.

None of the allegations against the four men has been proven in court.

All but Smalley have applied for changes to their bail conditions to allow them to return to the U.K.

The men, who have not yet entered pleas, were permitted earlier this year to transfer from Halifax to CFB Suffield in Alberta where there is a British army training unit.