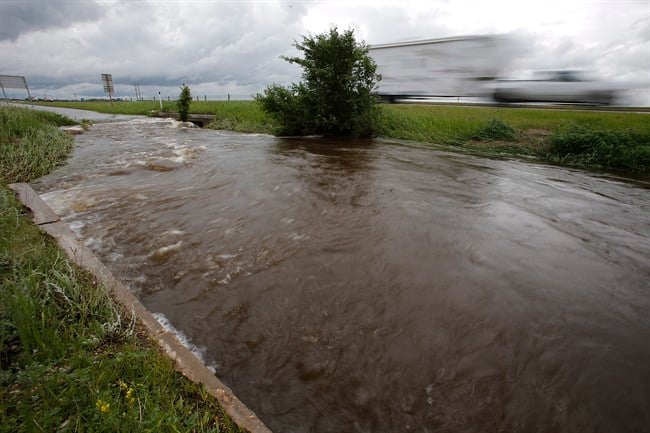 Ditches and culverts are at capacity due to overland flooding in Brandon and surrounding southwest Manitoba. Southwest Manitoba has seen a large amount of rainfall the past several days. (John Woods/The Canadian Press)

More than 150 acute care patients and long-term residents have been moved from a hospital in eastern Saskatchewan because of flooding.

The full-scale evacuation at St. Peter’s Hospital in the city of Melville, about 145 kilometres northeast of Regina, took place because a creek behind the facility was rising Tuesday.

Officials are also watching a nearby dam.

“The city was considering breaching the dam if the levels continue to rise, but that doesn’t seem to be the case right now,” said Patrick Boyle with the Saskatchewan Water Security Agency.

“The dam has not been breached. What we’ve seen happen is the water level coming into the dam, the dam is holding, it’s actually going around the dam … and that’s what’s creating the impact in the town and the cause for concern with the infrastructure there.”

Emergency management commissioner Duane McKay says the water has not entered the hospital and crews are building a berm on a driveway behind the facility.

“The water has not touched the building and the work that’s going there is to ensure that it never gets to the building,” said McKay.

The evacuation comes because a deluge of rain caused widespread flooding in eastern Saskatchewan and western Manitoba.

Officials had said Monday that parts of southeast Saskatchewan got more than 240 millimetres of rain over the weekend, while some parts of western Manitoba reported more than 100 millimetres. However, those figures came out while the water was still coming down in many communities.

Saskatchewan Social Services says communities have stepped up to help each other.

For example, people who fled their homes in Gainsborough, Sask., on Sunday night found themselves welcomed into homes by residents in the town of Carnduff. An emergency shelter set up for the evacuees was empty.

Meanwhile, McKay also says the number of communities under states of emergency has jumped to 53 in Saskatchewan.

The water was starting to recede in some communities as the sun came out Tuesday, but it may rise in others as water flows downstream, he said.

“We have seen some communities start moving a little bit more towards recovery and anticipating what it will mean to be on the end of this, while others are still dealing with situations they did (Monday) and some communities will see this situation worsen over the next couple of days before it starts to get better,” said McKay.

Pumping equipment is being moved into the area. Forest fire fighting crews in Saskatchewan have also been redeployed to help with flooding.

“We think we’re looking at an event that was larger in financial impact than the 2011 flood because it’s so widespread, because the number of communities are so significant and also because of the major infrastructure and highway damage,” Wall said Tuesday in Saskatoon.

“That particular event cost the province $360 million and so we’re thinking it’s somewhere higher than that. It’s obviously hard to get a handle on those numbers.”

Wall says it’s hard to assess some of the highway damage because the roads are still under water. At least 19 sections of highways in eastern Saskatchewan were closed to travel Tuesday.

Agriculture officials also say it’s too early to speculate how big the crop loss might be because many fields are still under water.

There were also 31 municipalities under emergencies in Manitoba, which is now bracing to deal with rivers swollen by the runoff.

“It’s not over yet,” Manitoba Premier Greg Selinger said Tuesday after touring flooded areas. “There’s been a lot of rain in Saskatchewan and all that water moves towards Manitoba.”

In Brandon, emergency officials are getting ready for an expected rise on the Assiniboine River, which is fed from tributaries in Saskatchewan.

The city is shutting off storm sewer outlets to prevent the Assiniboine from backing up into them, and is closing off portions of open portions of dikes with clay.

The city said the river levels Tuesday were already only 30 centimetres below their peak in the spring.

Selinger said other communities were reinforcing dikes and strengthening flood-control infrastructure to get ready. He said people in the region have a lot of experience dealing with flooding, noting it was also hit hard in 2011.

He the impact this time around is substantial.

“The amount of damage that’s been done in southwestern Manitoba in some of these communities is at least as much, if not more, than in 2011,” Selinger said.

Near Winnipeg, the Red River Floodway was scheduled to begin operating Tuesday to divert water around the city. Manitoba Infrastructure Minister Steve Ashton says there will be minimal flows through the floodway, but he says it must be done because of elevated river levels in Winnipeg.

The Portage Diversion is also in operation now at 17-hundred cubic feet per second.

Despite the Canada Day holiday, Winnipeg closed its city boat launches. Police asked people to stay off the rivers, warning that the Red and Assiniboine were flowing extremely high, fast and were full of debris.