The province has been picking jury candidates in a single random selection, when the law requires two. Have they opened the door to appeals? 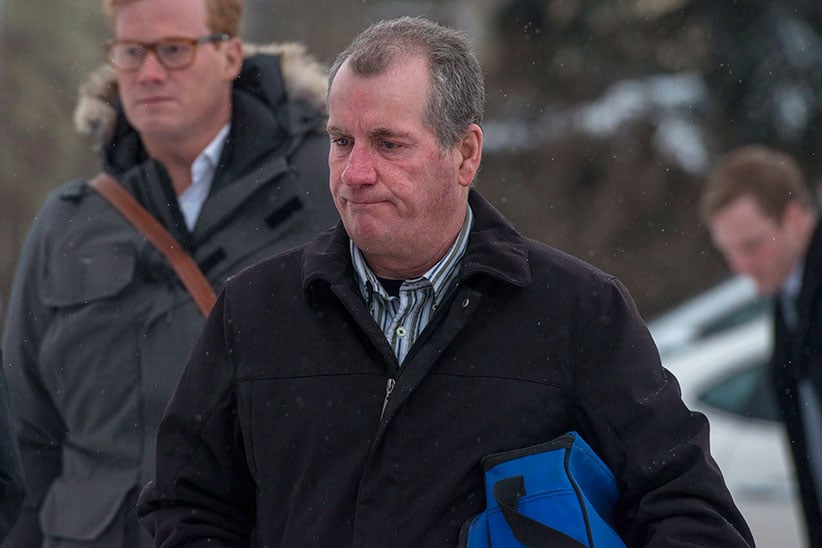 In the days before the trial of Gerald Stanley, 750 people were summoned to the Alex Dillabough Centre in Battleford, Sask. as potential jurors in the much-anticipated proceeding. One by one, people who were in the courtroom said, candidates who looked Indigenous were excluded until an all-white jury was formed—one that eventually acquitted Stanley of second-degree murder in the death of Colten Boushie, a Cree man from the Red Pheasant First Nation.

The jury’s whiteness, and the system of “peremptory challenges” that facilitated it, became focal points of criticism in yet another racially charged chapter in the province’s history. On Thursday, the Liberal government in Ottawa tabled a bill that would eliminate the use of peremptory challenges.

But there may be more criticism in Saskatchewan, because to get the 750-person pool that was ultimately whittled into 12 jurors, provincial officials were required by law to go through two separate random selections of names. In the case of Stanley—and, it turns out, numerous other jury trials in Saskatchewan—the second of those draws never took place, which is raising questions within the legal community as to why Crown prosecutors were so quick to forego an appeal, and whether the province can continue to overlook this provision in its law.

Under the province’s Jury Act of 1998, the guidelines for selection are clear: eHealth Saskatchewan, the provincial body that manages health records, at the request of the Ministry of Justice, randomly assembles a roster of residents from its health-card database using a computer algorithm and provides the list to a justice official called the “inspector of court offices;” then, in a second random draw from the eHealth list provided, the inspector selects what would be a smaller number of names and addresses for the local sheriff, who writes and mails the summonses. Having more than one draw by two different institutions appears to be a measure to ensure bias can’t be injected into the jury pool for specific trials.

But that second random draft appears to be rarely, if ever, performed in the province, and it’s unclear how many jury selections over the years have glossed over the legislated standard.

RELATED: In Saskatchewan, the Stanley verdict has re-opened centuries-old wounds

In a statement to Maclean’s, Noel Busse, a communications consultant in Saskatchewan’s justice ministry, said the inspector typically forwards the first list of names directly to the sheriff, adding that the process—though it appears not comply with the letter of provincial legislation—is used for “all jury selections in Saskatchewan” and meets the “overall legislative intent.” The province’s courts website also makes no mention of the mandated second random selection. 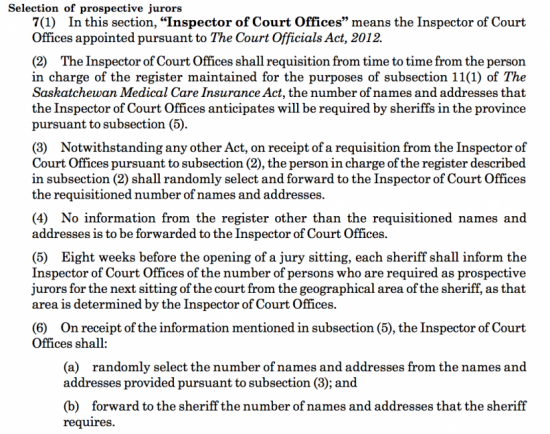 After Stanley’s acquittal, Anthony Gerein, assistant deputy attorney general, said the province’s public prosecutions office would not appeal—that there was “no basis” for such a plea. And the 30-day window in which the Crown can request an appeal has passed. When asked by Maclean’s about the failure to do double-selection, Gerein maintained his position. “A second selection isn’t going to increase the randomness, it’s just going to give you fewer people,” he said, adding that he doubts the failure to comply with the legislation would even be appealable: “It’s not an error by the court.”

Steven Bryant, a B.C. resident who followed the case closely, contacted Gerein and other court officials about the jury selection issue prior to the appeal deadline on March 9. But Gerein says that, had the verdict been challenged, it is unlikely the appeal court “is going to find an error that would or might reasonably have made a material difference to the result.”

Others are skeptical. “I find it hard to believe that an accused who appealed and argued to the Court of Appeal that the court administration did not follow the Jury Act—in terms of getting the right pool from which the jury would be picked—that [the appellate court] wouldn’t be very interested in that question, and that they wouldn’t order a new trial as a result,” says Glen Luther, a law professor at the University of Saskatchewan. There’s nothing to suggest that the first random selection in Stanley’s case was anything but fair, Luther stresses. And jury selection procedures vary from province to province: in Alberta, for example, lists of potential jurors can be drawn from local voters’ lists, tax assessment rolls or phone directories. The sheriff enters the names on cards and thoroughly mixes them in a receptacle, from which the court clerk empanelling a jury randomly draws them.

But to Luther, Saskatchewan’s omission of its second random selection raises the question of who’s in charge of ensuring everything is done by the book and that the procedures are carried out by the designated officials. (Provincial justice officials declined to address such concerns when asked by Maclean’s; both Kevin Wilson, CEO of eHealth, and Kimberly Volk, the sheriff in Battleford, also declined to comment.)

The integrity of jury formation has been an issue in Saskatchewan before. In 1997, a year before the latest version of the Jury Act, the Supreme Court of Canada ordered a new trial for Robert Latimer, a Saskatchewan farmer who was convicted of second-degree murder in the killing of his child. Latimer’s 12-year-old daughter Tracy lived with cerebral palsy, and he took it upon himself to end her suffering. The case divided the country, and it emerged that before his 1994 trial, the RCMP, at the request of the Crown, had questioned potential jurors on their views on euthanasia. “It simply was a question of ‘somebody meddled with the jury process and therefore a new trial has to be held’—that seems to be the conclusion that the court made,” Luther says. Latimer was found guilty again at his second trial but was given a lighter sentence.

Stanley’s case is different, of course, but Luther wonders why Crown prosecutors are disinclined to make an argument over whether the jury was properly formed: “I don’t understand how [they] could come to that conclusion without a prior case.”

The Supreme Court has on a number of occasions affirmed the right to a fair trial for the Crown and the victims whose interests it represents, Luther notes. Whether the Crown got one in the Stanley ordeal is debatable, he says. “I’m not saying [Gerein] would win. I’m saying I don’t know why he wouldn’t test the waters on it,” he says. The implications, Luther adds—that Saskatchewan has knowingly ignored this provision in its legislation for years, possibly decades—would potentially open the door to more appeals, including from people the Crown put behind bars.

After Maclean’s contacted the province for this story, Jennifer Graham, a communications consultant, said the Ministry of Justice has been conducting an overall review of the Jury Act since 2016. Luther believes there are only two options: change its practice or amend the act. The Crown’s window for an appeal in the Stanley matter might have passed, after all, but when it comes to selecting future juries in Saskatchewan, Luther says, “You can’t just ignore the law.”