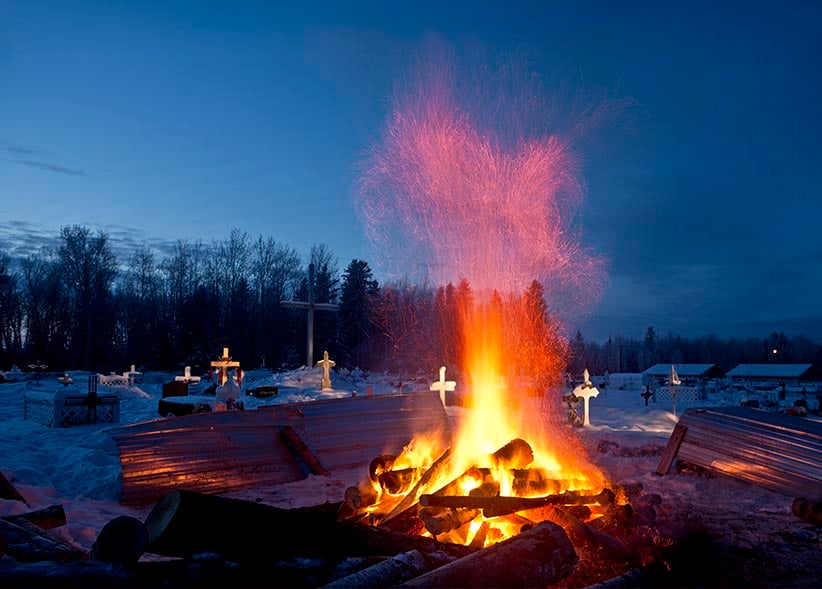 A fire burns in the cemetery in La Loche, SK to thaw the ground to prepare for the burial of the two brothers shot and killed last Friday. After three days of burning, volunteers will use shovels to dig the graves. (Photograph by Chris Bolin)

MEADOW LAKE, Sask. – A sentencing hearing is to be held next year for a teen who admitted in court today to killing four people in a mass shooting in northern Saskatchewan.

Provincial court Judge Janet McIvor has set aside two weeks in May and June for a hearing in La Loche to determine if the killer should be sentenced as a youth or an adult.

The judge called the shooting serious and tragic, and said it’s important the hearing be held in the community where it happened.

The 18-year-old, who can’t be named, sat quietly in Meadow Lake court as his lawyer entered guilty pleas to first-degree murder in the deaths of two teachers at a school on January 22nd.

He pleaded guilty to second-degree murder in the deaths of two teenage brothers at a nearby house.

He also pleaded guilty to attempted murder for wounding seven others at the school.

He was 17 at the time of the shooting.

No agreed facts about what happened — including a motive — were submitted to the court.

Mounties said at the time that they responded to the school after receiving panicked calls from staff and students.

Here is a timeline of events provided by police that day:

Before 1 p.m. — Two teen brothers are gunned down in a home on in the 300 block of Dene Crescent. There is a chilling exchange between friends chatting online. “Just killed 2 ppl,” a young man wrote to his friends. “Bout to shoot ip the school.”

Shortly after 1 p.m. — Police begin receiving calls from frantic students and teachers saying there is a shooter in the school. Students, just returning from lunch, flee for their lives. Some run for the doors, others hide in gym dressing rooms for several hours.

Between 1:08 p.m. and 1:10 p.m. — Police begin arriving at the school. Officers see the outside door has been shot. They see a shooter inside and chase him deeper into the school.

1:15 p.m. — Police challenge the shooter and he surrenders without negotiation or incident. Officers find nine people shot. Teacher’s aide Maria Janvier, 21, is dead at the scene. Teacher Adam Wood, 35, is rushed to hospital, but cannot be saved.

After 1:15 p.m. — Police receive a call about a body in a house. They rush to the Dene Crescent home and find Drayden Fontaine, 13, and Dayne Fontaine, 17, dead.