Saskatchewan voters head to the polls after lacklustre campaign 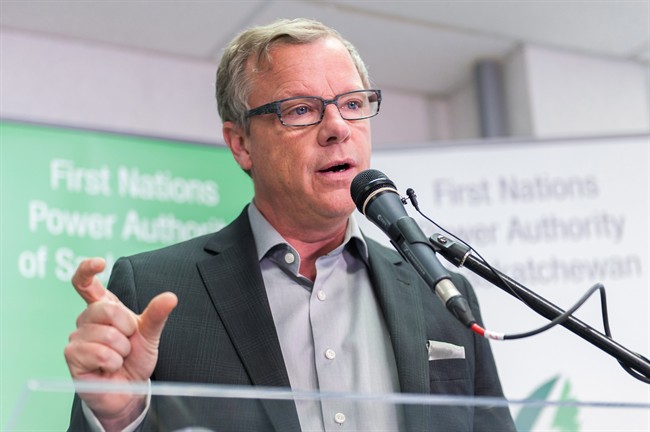 The Weyburn firm, Valleyview Petroleums Ltd., has been forced to lay off workers with a lot of experience.

In Saskatchewan Party Leader Brad Wall, Cugnet says he sees someone willing to speak up for the province during tough times.

“There’s not a lot the provincial government can do in regards to commodity prices,” says Cugnet. “But by creating an environment where they want to get people to work, they aren’t creating any regulatory uncertainty … and raising the awareness at the federal level that people are going without right now, that’s part of why they have my support.”

Four bright orange NDP signs are lined up in front of one building in Regina.

The Regina Professional Firefighters Association is non-partisan, but president Brian Seidlik says it didn’t object when labour group Unifor put the signs up.

Seidlik says there was nothing in the campaign to help firefighters, who have pushed for better benefits and called on the government to recognize post-traumatic stress disorder among its members.

Wall did promise a new tax credit for volunteer firefighters, but only once finances improve. The province is currently in a deficit.

The NDP pledges to cover post-traumatic stress disorder through Workers’ Compensation, a call it says came from many, including professional firefighters.

Voters head to the polls in Saskatchewan Monday after a 27-day campaign that has featured few broad-based promises and lean party platforms.

Widely considered only two-way race between the incumbent Saskatchewan Party and the Opposition NDP, University of Saskatchewan political science professor Charles Smith says there’s been a lack of vision on big issues.

“You don’t see voters getting excited about big issues or about replacing the government,” says Smith. “It’s been really sleepy and there’s been hardly any interest, I think, in the issues brought forward by the parties.”

Smith says the popularity of Wall is a large factor in that.

“People just don’t see the need to change the captain of the ship,” says Smith.

Wall, 50, consistently ranks as one of the most popular premiers in Canada in public opinion polls and has tried to paint himself as the defender of Saskatchewan throughout the campaign.

The premier spent most of the time talking about his party’s record since taking office in 2007. The Saskatchewan Party formed in the 1990s as an alliance of Liberals and Progressive Conservatives.

Wall says his government has promoted the province around the world and stood up for its interests at the national level. He thinks people were served well by the election, even if they weren’t energized by the campaign.

“We’re about … to do something that many people around the world would literally fight and sacrifice for the chance to do, and that’s to cast a ballot and decide who the government’s going be,” Wall says. “I think for that reason, elections are always good.”

Wall’s party took more than 60 per cent of the popular vote along with 49 of 58 seats in the legislature in 2011, leaving the NDP with just nine. This time there are 61 constituencies.

NDP Leader Cam Broten, who will turn 38 this month and took over in 2013, rolled through more than half of those seats in the final days of the campaign.

“Everyone is focused on the job at hand and that’s still knocking on those doors,” Broten says. “I’m lifted up by all the work that all the volunteers and the candidates are doing.”

Despite the lacklustre campaign, both parties acknowledged there are ridings that could go to either way. Wall and Broten both spent time in Moose Jaw on the weekend, where there are two seats being contested.

Smith says for the NDP to consider the election a success, it needs to see growth.

“An increase of five seats to 14 would give them some momentum,” says Smith.

“It would put a bit of wind in the sails of Mr. Broten, who’s still very much a rookie leader. This is his first real test. In some ways, he’s had a Herculean task to try and take down Mr. Wall.

“I don’t know anybody who could have done it, quite frankly, given the polling numbers.”