A fortunate Prairie province has rallied around its top doctor, Saqib Shahab, who fell in love with Saskatchewan after moving from Pakistan to the small city of Yorkton 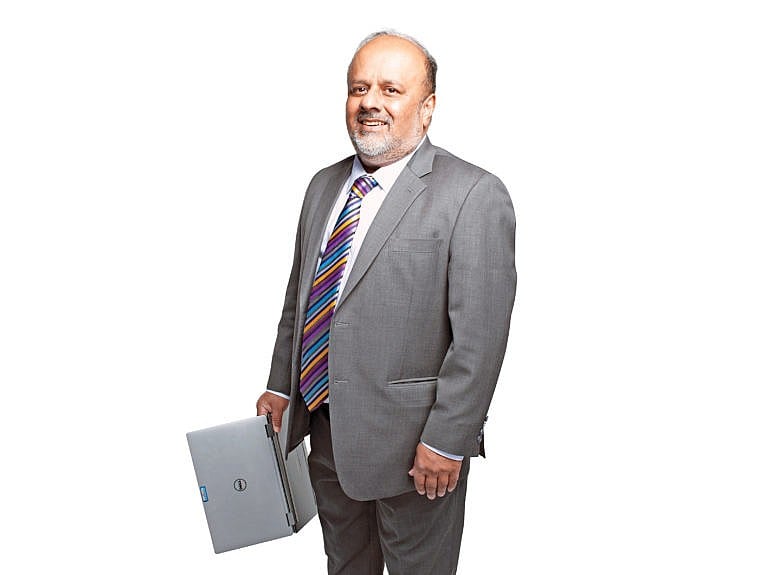 When staff at a Tim Hortons in Regina wanted to pay confectionary tribute to Saskatchewan’s top public health doctor, the design was pretty obvious: two chocolate eclairs fused together with caramel icing trim and white “buttons” down the middle, to look like Dr. Saqib Shahab’s trademark brown knit cardigan vests. He’s amused they became his trademark—he’d only begun wearing them to health updates because early in the pandemic, when such appearances were daily, he didn’t have enough suit-jacket combos to keep up. So he began donning his many sweater vests, including the ones his wife’s aunt had knit for him, with matching ones for his kids.

The doughnut, introduced in February, was more than just a show of gratitude for Shahab, whose compassionate and to-the-point briefings made him a household name in Saskatchewan. (He cites a saying of his father’s, once a prominent civil servant in Pakistan: “Tell the truth, because then you don’t have to remember what you said.”) It was also a very Canadian show of solidarity after a small group of anti-restriction protesters picketed outside his house one Saturday. Premier Scott Moe called them a “group of idiots”; many families sent Shahab support messages and children’s drawings. “It gives wind to my sails, certainly, and that is what Saskatchewan is all about and what Canada is all about,” Shahab said at the next briefing.

He’s one of Canada’s longest-serving provincial chief medical officers, in his current post since 2012. Shahab started his career in Pakistan, where he helped create its first public health school—then he answered a job posting in the small city of Yorkton, Sask., and became enamoured with the Prairies’ relaxed pace and wide open spaces. There’s been little relaxing during the last year: he recalls, in the coronavirus crisis’s first months, that his research, reading and briefings only allowed him four hours of sleep per night. But he’s also taken more of the year to enjoy Regina’s outdoors, reckoning he’s walked and cycled farther in the last 12 months than he’s driven. He’s been pleased to see others doing the same: with a ban on indoor social gatherings over Christmas, “every inch of snow had footprints on it in open areas.”

Saskatchewan was compliant enough with the restrictions Shahab urged—and, let’s be realistic, lucky—that it had a negligible first wave, and a late and limited second wave this winter. Even though he is well distanced from the premier and media during briefings, Shahab insists on wearing a mask when he talks, to show frontline workers it’s no impediment to communicating. He’s preached restraint on lockdowns; Saskatchewan has had some of Canada’s lightest restrictions: “Every measure puts some burden on people and it has to be proportionate to the risk.” But there’s still pushback, and at one rally last fall, the criticism got racist. Shahab says the few who criticize him based on ethnicity need to resolve their issues, and he’s more concerned about those who face racism but who lack his own privileges and protections. Says Moe: “He could have chosen anywhere in the world to go and practise his trade, but he didn’t. He chose here, and Saskatchewan is certainly a better place because of the choice he made.”