The Alberta Tories have kissed their fundraising edge goodbye, as well as the corporate donations they've long been reliant on. 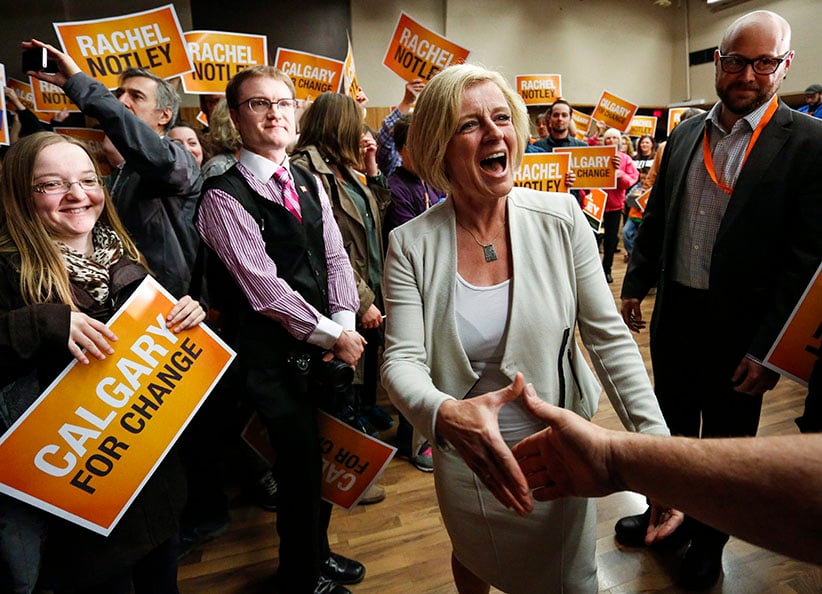 By a whopping $374.61 – enough for 16 People’s Republic of Albertastan T-shirts! – the Alberta NDP can claim the fundraising crown for the latest quarter.

From the period from April 1 to June 30, the newly governing New Democrats reported $269,730.61 compared to the opposition Wildrose’s $269,356, according to the latest figures released by Elections Alberta. The p0st-dynasty Progressive Conservatives came in third place – hey, this sounds like the election results – but just barely, with a $259,636 haul.

This is the NDP’s first time as contribution leaders, after edging the Wildrose for second place behind the Tory machine in the year’s first three. However, it comes in an unusual quarter because it overlaps with the election campaign period. (Because the campaign fundraising period extends two months past the May 5 vote, only the days until former premier Jim Prentice’s April 7 election call sit exclusively within the second quarter. Much of this would be cheques in the writ period’s run-up.) There’s high curiosity about how much debt the Tories amassed for their losing battle, but we’re not going to see the election numbers officially until December. These latest numbers give some hint of the money game’s realignment, and show more starkly just how much of a hole the NDP dug for the Tories by scrapping corporate and union donations with Bill 1 in their quickie spring legislature session. In future quarters, the Tories might not be within visible distance of the leaders.

Of the Tories’ reported quarterly haul, at least $193,825 or 75 per cent came from corporations and union (yes, union singular—one plumbers’ and pipefitters’ local). The list includes nine companies that gave $10,000 or more, and the lead cheque-writer was TIW Western, a steam-generator manufacturer that gave the former ruling clan $25,000.

The NDP disclosed $25,500 in union and corporate donations, less than one-tenth of their total quarterly income. The big-labour party has traditionally not been as reliant on union largesse as the Tories could be on corporate dollars. For the Wildrose party, which had better fundraising stints than the PCs during the Redford era, companies gave $41,515, or 15 per cent of all contributions. During the election, businesses did give more to the party Danielle Smith left for dead – the Wildrose volunteered in early May a list of $1 million in campaign income, and it was top-heavy with corporations giving up to the maximum of $30,000.

The campaign and second quarter were the last times the likes of 1703304 Alberta Ltd. could plump party coffers. The NDP government blotted out the days of corporate and union donations as of June 15, through legislation titled An Act to Renew Democracy in Alberta. The Tories would have better known it as the Aww Hey No Fair Act, though after a bit of early grousing by interim leader Ric McIver, the party joined all other MLAs to support it.

Troy Wason, the decimated PC party’s interim managing director and lone employee, says it will adapt by asking executives of corporate donors to cut personal cheques, and by making more direct appeals to members. Wason remarked on the steady stream of “You won’t believe what the Conservatives are up to!” email solicitations he gets from Tom Mulcair, though he’s not sure why he gets them. The Tory realizes that going cap-in-hand for $10, $20 or $50 is the what the Obama Democrats and the Harper Conservatives are up to, and have been successfully, for years. “That’s just the way of the world, and now it’s the law in Alberta,” Wason says.

The NDP and official Opposition Wildrose are much better positioned for the new fundraising rules and others that may follow. If the formerly dominant party has any hope of escaping from the depths of third place – and they still do – they’ll have to learn to adjust under rules that, for the first time since the 1970s, the Tories didn’t get to write.