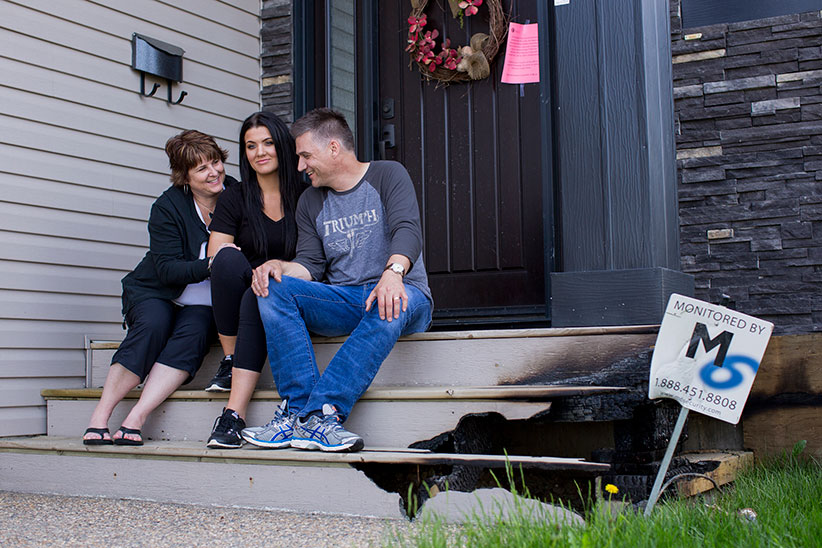 Nolan and Kathy Palmquist and their 17-year-old daughter, Kelsey sit on the front steps of their home in the neighbourhood of Stonecreek in Fort McMurray on Thursday, June 02, 2016. Their 4-bedroom home on a corner lots had only damage to the vinyl siding and front steps, while all houses across from them burned to the ground. (Photograph by Chris Bolin)

Jason Markusoff is in Fort McMurray to witness a city returning to rebuild. Read his Day 1 dispatch here.

Kathy, Nolan and Kelsey Palmquist rolled their truck past the security checkpoint for their Fort McMurray neighbourhood, turned right around their imposing wood fence, and into their driveway. According to the street signs, they live at the corner of Gravelstone Road and Prospect Drive. According to their surroundings, the Palmquists live at the corner of ruin and devastation.

Across either street from them lays an expanse of ash, twisted metal and security fences, preventing anybody who lived there from sifting through the remains. ‎Inside the scorch zone’s fence, two men in white hazmat suits collected ash and dirt samples. In older neighbourhoods, ash samples led the government to ban residents with intact houses from returning for months, until the debris is all cleared.

But the Palmquist home had been deemed safe. The first prominent scars on their home were superficial: melted vinyl siding, some of it hanging so low that Nolan, 50, peeled it off onto the overgrown lawn. As they climbed their stairs to the front door, it became plainly visible why their house survived: the stairs themselves, and the black edges around where the fire had started to gnaw through them.

Wildfire destroyed dozens of houses in the Prospect Pointe and Stonecreek districts on May 4, the day after older neighbourhoods in Fort McMurray burned. Flames tore through the trees around the district and behind the Palmquists’ home, and flaming ember must have hopped over that wooden fence on onto their front steps. That’s where the water brigade stepped came in. Firefighters couldn’t save what was across either street, but they pried open the wood panel underneath 101 Gravelstone’s stairs and sprayed from many angles. At the top of the steps, a decorative Buddha statue smiled placidly. “My husband hates the Buddhas but I tell him: a combination of the buddhas and the firefighters saved our home,” Kathy said.

“If the firemen wouldn’t have done that, we wouldn’t be back here.” Nor would the other houses on their side of the street. The home had been listed in earlier maps as part of the red zone, the scorch zone. By mid-May, they had learned they were in the lucky majority of Fort Mac residents, though a rarity in their own neighbourhood.

A before-and-after aerial shot of the Palmquists’ home (marked by the red arrow) and the razed homes and damaged trees all around it. (firemap)

The nearest window, into the garage, cracked from the heat. The supporting pillar is badly singed, but solid; there was plenty of stair left Thursday for the family to bound up, allowing Nolan to tear off the yellow “restricted use” safety sign, unlock the door and step in.

“Boy, is it ever cold. Why is it so cold?” Kathy asked as she slipped off her shoes and stepped onto the foyer tiles, to begin inspecting the house and reconnecting after a month of forced exile. The power had remained off, so it wasn’t the air conditioner chilling the four-bedroom house. Amazingly, there was no smoke smell inside, and the stainless-steel fridge had mostly trapped any odours. It was an insurance write-off; they didn’t want to know how that smelled inside.

As they looked out the window behind the kitchen, Nolan saw several rows of trees had been mowed away around the nature trails. Communities were urged to clear a tract of combustible nature near homes in wake of the 2011 fire that levelled one-third of Slave Lake, but such warnings were little-heeded. “It probably should been like that five years ago,” Nolan said. In the other kitchen window, a vista of carnage.

Somebody made a remark about some slight problem. “It could have been worse,” the father said. “We could have had nothing, like the neighbours.”

They hadn’t learned the names of their neighbours who lost everything, but they’d at least recognize them. “We just knew of them, seen them outside with their kids,” she said. 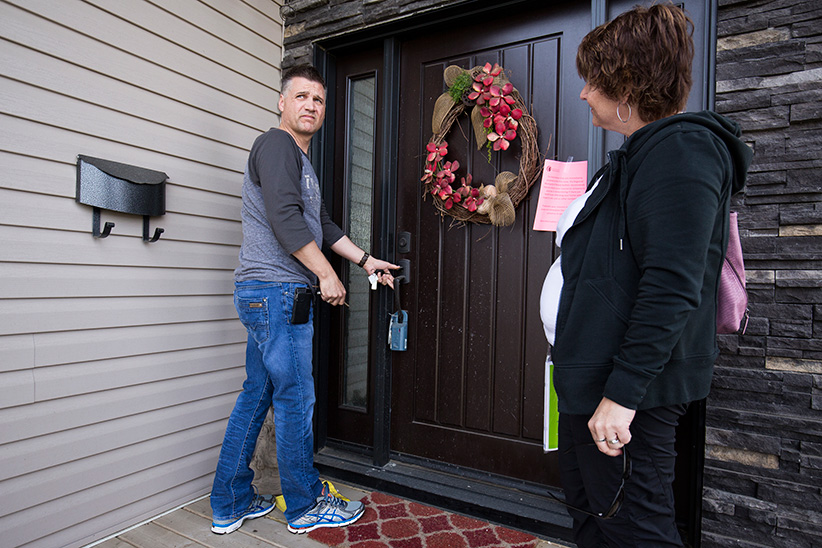 Nolan and Kathy Palmquist enter their home in the neighbourhood of Stonecreek in Fort McMurray on Thursday, June 02, 2016. Their 4-bedroom home on a corner lots had only damage to the vinyl siding and front steps, while all houses across from them burned to the ground. (Photograph by Chris Bolin)

On the other side of Prospect Drive, electrician Jeff Staal parked his truck along his old sidewalk. He looked out past the charred foundation of this house, the dog crate and mattress coils in a twisted pile, and out toward the garage behind. The possessions the 42-year-old missed, and wished he could rummage through, lay in the garage: a classic glass-door 7-Up soda machine, his weightlifting bench, and most vitally the 170 skateboards he had hanging on the walls. Many were vintage, and others where shaped by Staal’s older brother, who had died of a brain tumour 10 years ago. “We just spent our whole lives skating and surfing, the board sports,” he said, looking through the fence. He wasn’t insured, but nor was he worried—he and his wife will find another rental home. “It got everything I owned, but I’ll rebuild,” Staal said. “It didn’t get the best of me.”

Gord Ober and Casey Davidson lived one street over, farther from the security fence. They had to step up onto a utility box to spot any visible remnant of their townhouse—the charred frame of the trailer, but none of the new all-terrain vehicle the couple had bought. They drove up six hours from Sylvan Lake, Alta., hoping to get in closer. They couldn’t. There are many stages of loss. Seeing the neighbourhood of rubble put Davidson in the disbelief stage. “It’s so weird. Like, how?” she asked to nobody in particular. 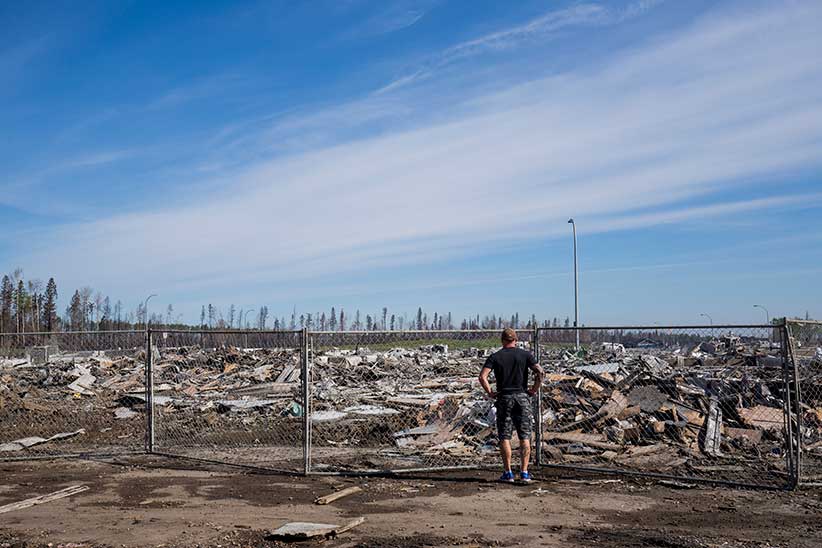 Scott Borowsky surveys the damage of his neighbourhood in Prospect Pointe in Fort McMurray on Thursday, June 02, 2016. He and his wife who lived at 121 Siltstone Place lost their home in the fires. (Photograph by Chris Bolin)

Many McMurrayites, whether they lost their home or merely missed it during the month-long evacuation, sometimes used the term “dream home.” The Palmquists weren’t exaggerating: their 3,600-square-foot manse was once the “2012 Oil Barons Dream Home,” raffled off to a winning fan of Fort McMurray’s junior hockey team before it was sold to the Palmquists four years ago. They’d have to redo the vinyl siding, and fix those stairs, but it could be dreamy once again, as everybody rebuilt around them.

Kathy works for the Canadian Mental Health Association, so she’s keenly aware that her own family is working through these issues for the last four weeks: fear, anxiety, survivor’s guilt, longing. As the mother surveyed the damage outside, she worried about Kelsey, her 17-year-old. “All her friends are scattered. She didn’t have her car. She didn’t finish school,” Kathy said. With the power switched back on, Kelsey was watching cable TV inside.

In the garage, where a beer fridge, a meat freezer, and Kelsey’s Audi had sat for weeks, the smell was overwhelming—so powerful it left a bad taste in one’s mouth for hours. The family opened the garage door to air out the home. With duct tape and a dolly, Nolan carted the fridge outside, unwrapped the tape and used the end of a steel shovel to open the door, standing behind it to avoid a stench blast. Even with a respirator mask on, the smell was rank: inside, a thawed Butterball turkey, wrapped cooked fish in cream sauces, and various meats had gently greened over. He closed it back up, applied the duct tape. “There. We’ll never see that again,” Nolan said. If they wheeled it to the curb before 3 p.m., a municipal truck would haul it off..

Outside their garage, though, pots of geraniums were still flowering. “In midst of destruction, life,” Nolan remarked.

MORE: Inside the great escape from Fort McMurray

Kathy told Maclean’s that at one tougher point, her husband had wished they’d lost the house, too. It might have just been simpler that way—hey had listed the house for sale back in March, because they’re moving to the Edmonton area where Kelsey will go to university. They’ve already bought a house there, and Newalta, Nolan’s engineering firm, has transferred his management job south. They’d had to slash the price of their million-dollar home because of the economy, and were prepared to do so again.

Then the wildfire came, wiped out their neighbours’ homes and damaged their own house. Their real-estate agent says they could sell quickly, now that others need a new place to live.

The Palmquists’ moving truck is booked for the end of June. Kathy is inclined to postpone it—to stay, to help rebuild, to come together again with the city.