Scenes from the G20 courthouse

Dozens of activists set free as charges against them are dropped 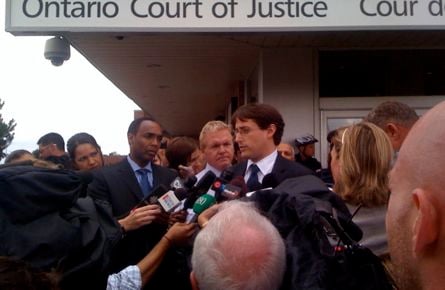 Over 300 people crammed into a Toronto courthouse on Monday to face charges related to last June’s G20 protests. The judges went through the cases rapidly, withdrawing charges against dozens of people and remanding other cases to a later date.

The alleged ringleaders, including Mandy Hiscocks, Alex Hundert, Leah Henderson and Jaggi Singh, were in and out of the courthouse in little time. Their court dates—along with those of another core group of 17 accused—were among those that were remanded. Peter Rosenthal, the lawyer representing Jaggi Singh, said he’d “never seen so many remanded for one court date.”

The back half of the first floor hallway courtrooms was filled with francophone Quebecers, with one courtroom holding proceedings in French while another was designated as bilingual. “People got arrested for having a Québécois license [plate],” said Jacynthe Poisson, a student at UQAM (Université du Québec à Montréal). Poisson was charged with conspiracy to commit an indictable offence and was among about 90 people who were arrested Saturday morning while they were sleeping in a gymnasium at the University of Toronto.

Vanja Krajina, 22, is among those who won’t have to return to the cramped courtroom. Krajina was arrested at the corner of Queen and Spadina while walking by herself to meet her boyfriend. She was charged with conspiracy to commit an indictable offence and was also facing explosives charges, which she says were due to her having saline solution for her contact lenses in her bag. Those charges were dropped today.

Others weren’t so lucky. Alison Peters, 24, was charged with obstructing a police officer and unlawful assembly. She could have settled for a $50 fine, but insisted on fighting the charges. “I was being trampled by horses,” she said. “That’s when I was arrested.”

Police officers were stationed throughout the building and in the courtrooms, patrolling the hallways with batons and plastic handcuffs. Despite the heavy security presence, the mood was mostly festive. Jason Dippel, a supporter of the protesters, was handing out cupcakes, while other activists set up a buffet. “We want to provide food and comfort for people,” says Katie Bell of the Toronto activist group 24/7 G20. Bell says the food was arranged through private donation.

One police officer who worked at the detention centre where the activists were held dismissed those complaining of mistreatment as “mouth pieces.” He said detainees at the film studio-cum-jail ate better than he did, were given water if they needed it, and had access to thousands of dollars’ worth of trackpants, sweaters and socks to keep them warm. The officer, who didn’t want to be identified, now consider their ordeal as “a big joke.”