Dr. Gary Kobinger led charge on ZMapp and the first Ebola vaccine that has been shown to be effective in people 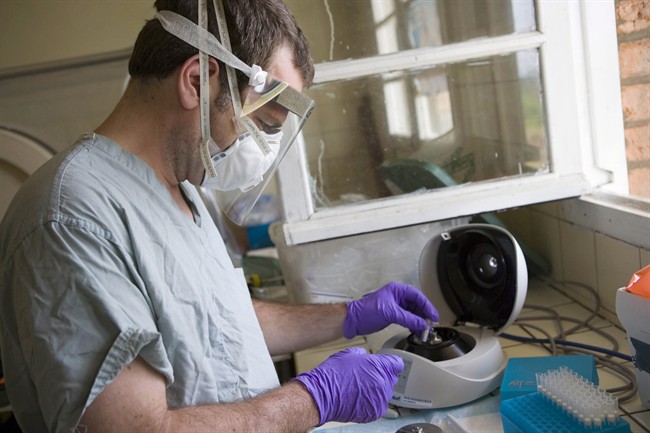 TORONTO – The scientist who led the work to develop the Ebola drug ZMapp is going to be leaving the National Microbiology Laboratory in Winnipeg.

Dr. Gary Kobinger is the lab’s chief of special pathogens, heading a team that works on some of the world’s worst disease threats.

Kobinger will be vacating that position next June to become the director of the Centre for Research in Infectious Diseases at Laval University in Quebec City.

“We’re so proud. We consider we are very privileged to have the opportunity to have him,” said Dr. Michel G. Bergeron, the founder and current head of the centre, who is relinquishing the directorship — but staying on as a researcher — after 41 years.

“Gary is a fantastic human being and an extraordinary researcher.”

In an interview, Kobinger said the long notice will give the Public Health Agency of Canada time to find the right candidate to take over the special pathogens program, which has brought great acclaim to the national lab.

In addition to ZMapp, the Winnipeg group designed the first Ebola vaccine that has been shown to be effective in people. And it developed and pioneered use of small mobile laboratories — a lab in a suitcase, essentially — that have changed the way testing is done during Ebola outbreaks.

Kobinger grew up in Quebec and had hoped to return there someday. Still, he said deciding to step down from the Winnipeg job was difficult.

“The amount of publications and contributions that this group has been doing … in the past five years is quite impressive.”

He has made many contributions to the field of research into viral hemorrhagic fevers such as Ebola and Marburg. But the development of the drug ZMapp will likely be remembered as one of his major contributions during his time in Winnipeg.

The drug is made up of three specific antibodies that fight Ebola. The drug is currently being tested in West Africa, though it is possible the dwindling outbreak there may end before the trial can be completed.

Immune systems produce a variety of antibodies to protect against disease invaders; some are general and some highly specific. To produce monoclonal antibody drugs such as ZMapp, scientists try to home in on specific antibodies, then clone them to produce concentrations of them to infuse into a sick person’s bloodstream.

Kobinger and his team produced a cocktail of three Ebola monoclonals that looked promising against the virus in animal testing. Meanwhile, scientists at the U.S. Army Medical Research Institute of Infectious Diseases in Frederick, Md., produced their own monoclonal cocktail of three antibodies. There was no overlap between the two.

Kobinger decided to try to optimize the cocktails, mixing and testing various combinations to see which was most effective when given to primates infected with Ebola. The resulting drug, ZMapp, is made up of two of Winnipeg’s monoclonals and one made by the U.S. team.

Kobinger took over as special pathogens chief from the group’s first head, Dr. Heinz Feldmann. Feldmann, who left the Winnipeg lab in 2008 to become chief scientist for Level 4 laboratories at the U.S. National Institute of Health’s Rocky Mountain Laboratories in Hamilton, Mont., led the work on the Ebola vaccine.

Kobinger, who had been working on a different Ebola vaccine project at the University of Pennsylvania, had been collaborating with the Winnipeg group. Feldmann told then scientific director Dr. Frank Plummer he should hire Kobinger.

“So I hired him and it was one of the smartest things I ever did,” Plummer said in an interview with The Canadian Press last year.

Over the past 15 months, Kobinger and 26 other scientists from the Winnipeg lab have worked in rotations in West Africa, with two- or three-person teams operating mobile laboratories to help Ebola treatment centres diagnose those infected with the disease. At one point, Winnipeg had three lab teams in the field. One team is still in Guinea.

Though Canada first developed a mobile testing lab, other countries have followed suit.

“I think the concept really spread out and I think that’s awesome,” Kobinger said.

At Laval, Kobinger will lead a centre with a strong reputation and a roster of 200 scientists.

It does not have a Level 4 laboratory. Those are the most secure laboratories, where work on the most dangerous pathogens is done. But Kobinger doesn’t believe the move will spell the end of his Ebola work.

“I see this as expanding the horizons, not restricting them,” he said.

“I have so many friends in the field of Level 4 (research) that I’m really hoping that I’ll be able to keep collaborating with many of them.”