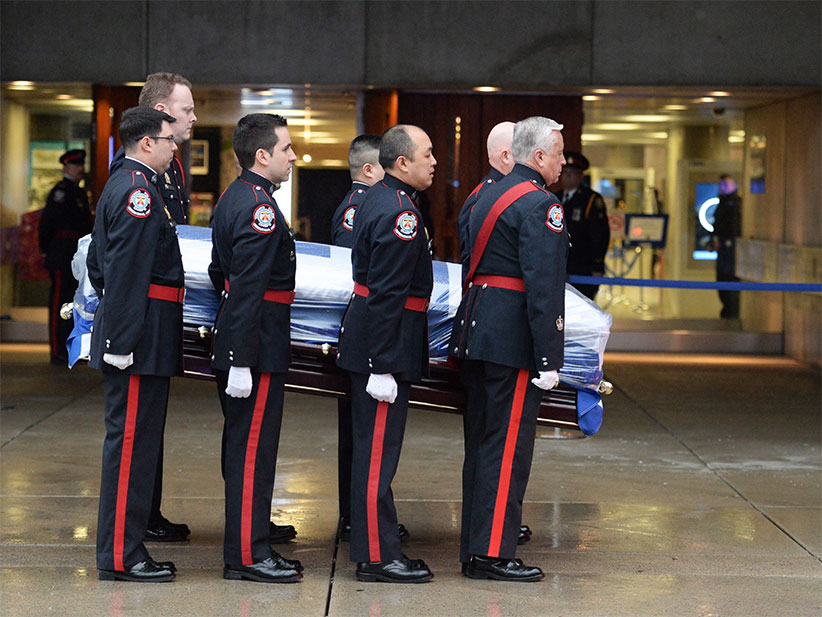 Former mayor Rob Ford's casket is brought into Toronto City Hall on Monday, March 28, 2016. His body will remain there until Tuesday afternoon; his funeral will be held on Wednesday at a downtown church.

TORONTO – Rob Ford lay in repose Monday at the city hall he dominated for years as mourners filed past his casket to pay their respects, the subdued mood on a dreary day a far cry from the wilder scenes that characterized his scandal-plagued mayoralty.

Mayor John Tory, who gave permission for Ford to lie in repose, was first to pause quietly at his predecessor’s casket, then shake hands with relatives, among them Ford’s brother Doug, mother, wife and two children.

Among the mourners were some of the former high school football players Ford once coached.

“Everything that the media put on him was always so bad that no one ever got to see the good that he did for us as football players, as students, as a mentor,” said Andre Laporte.

“He left all the political stuff at the office and focused on football when he came to the field.”

Some touched or kissed the casket, draped with Toronto’s flag—blue and white, emblazoned with a red Maple Leaf. Some quietly shed tears. Some crossed themselves.

Ford’s death last week earned international headlines in light of his admitted crack cocaine use, alcohol abuse, lewd comments and at times outrageous behaviour that transformed his office into an unprecedented political and celebrity spectacle.

The loved-or-loathed politician brazened through the often lurid headlines for reasons other than his purported taxpayer-friendly policies. But much of the mayhem seemed forgotten Monday.

In its place was a dignified affair as Ford was granted a rare honour not provided to a former mayor since 1998, although Jack Layton, one-time federal NDP leader and longtime Toronto city councillor, also lay in repose at city hall in 2011.

A city spokeswoman said Ford’s family asked that his body be allowed to lie in repose and Tory gave his blessing.

Also on hand Monday was George Smitherman, the odds-on favourite to win the mayorality in 2010 but who nevertheless was trounced by Ford. Smitherman said he expected only tributes now for the former mayor.

“There will be a strong outpouring of love, which is appropriate for a politician who managed the rare feat of being open enough to generate genuine connection and love with constituents,” Smitherman said.

The sentiment was echoed by Vince Ross, who said Ford showed up at his wedding last year despite undergoing chemotherapy for the cancer that would eventually kill him last week.

“(He) was really gracious, took pictures, talked to everybody and really kick-started the party,” Ross said.

Ford’s casket will remain at city hall until Tuesday to allow the public to say goodbye.

On Wednesday, a procession will head to nearby St. James cathedral for funeral services, followed by a private family ceremony. Late Conservative finance minister Jim Flaherty’s funeral was also held at St. James.

Ford served as mayor from 2010 to 2014 but his re-election bid was stymied by his cancer diagnosis. He dropped out of the race weeks before voting day but ran for his old city council seat instead, winning easily.