Scott Gilmore: The horror of forest fires is roaring back

Our forests are burning more than ever before, even if an increasingly urban Canada hasn't been paying attention 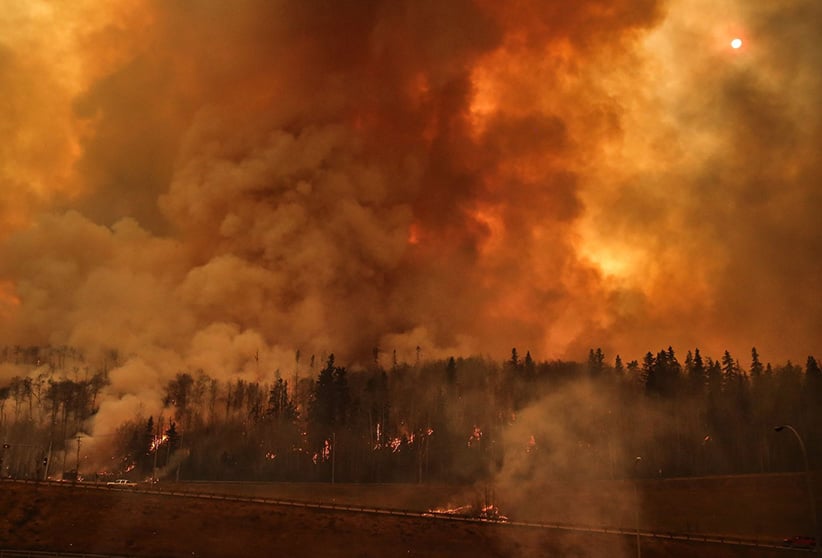 Fire seen from the highway in Fort McMurray, May 4, 2016. (Serghei Cebotari)

One hot summer when I was a boy the forest fires were bad.

It began with the air. Each day the sky up there, in northern Manitoba, was a little hazier than the last, and every sunset was a spectacular orange.

As a kid, I didn’t worry about these things, but I couldn’t help noticing the adults did. At dinner they wondered when the rain would come, and nervously talked about a reserve being evacuated up the road. Soon we could smell the smoke, and the water bombers began to fly overhead. It was exciting.

When the fires came close enough, we could see columns of ash billowing up, yellow and dirty. The water bombers began to land in the bay, the engines roaring as the planes reloaded and took off, again and again. After dark that night I swam out into the lake, far from the crowding pines on shore, treading water to see the horizon and the red glowing thunderheads rolling into the sky. But the next day the rains came, and the smoke went away, and at dinner the grownups returned to talking about the pickerel and the price of gas.

For a country that contains a tenth of the planet’s forests, you would think we would talk about forest fires more. But we don’t. Wildfires are one of those old plagues we’ve forgotten, like cholera and locusts. And yet forest fires didn’t go away, we did. We’re an urban people now. Over 80 per cent of us live in large cities, far from the bush. More than half of us are huddled along the corridor between Montreal and Niagara and the only forests we see around there neatly separate farms along the 401.

So we’ve forgotten the horror of a crown fire, like the one that is tearing through northern Alberta right now. The smoke gets so dense you can’t see the car in front of you. The flames move faster than you can run, and easily leap over every road, river, firebreak or lake in its path. They burn so hot that the air in front can be 800° C, instantly drying the trees ahead. The flames create its fuel as it goes. And the trees can burn so quickly they crack and explode. A large forest fire can generate its own weather and wind, and blow embers far ahead, creating new fires miles away.

Canada’s forests are burning more than before, even if we haven’t been paying attention. In the 1970s, the Canadian National Forest Fire Database tracked about 4,000 fires annually. Over the last decade it’s been over 8,000 on average. Last year over 45,000 sq. km burned, an area larger than Switzerland. And unless you were living in La Ronge, Sask., or Rock Creek, B.C., there’s a good chance you didn’t even notice.

But you may begin to notice. Natural Resources Canada is predicting that climate change will result in more frequent fires. Summers, in some parts, will grow hotter and drier, and as the ecosystems shift, some types of trees will die off and offer new fuel. In fact, NRCan expects the amount of area that burns each year could double by the end of the century.

Late one summer a few years ago I flew up into northern Saskatchewan to paddle the Cree River. On the second morning we pulled our canoes up on shore and found someone had camped there the night before. Their campfire was out, but after they’d left a southern wind had blown sparks into the tall grass, which had burned into the surrounding trees. This had only happened a few hours earlier, and the trees were still smoking. You could see where they had walked on the frost-covered grass, leaving a trail of perfect unburnt footprints down to the water. They likely never knew what they’d left behind.

We paddled for days through burnt country. On both sides of the river, everything was black and smoking, no wildlife, no birds. We camped in ash, our eyes red from the lingering smoke, and everything we wore was grey and black. In the remains of a trappers cabin I found a box of tools, melted onto the rocks. Near there we climbed a hill to see how much had burned. It was black to the horizon, a complete apocalypse.

This is a big country, and that fire didn’t even make the news. Unfortunately, our country may not be big enough to hide what’s waiting for us in the years ahead.