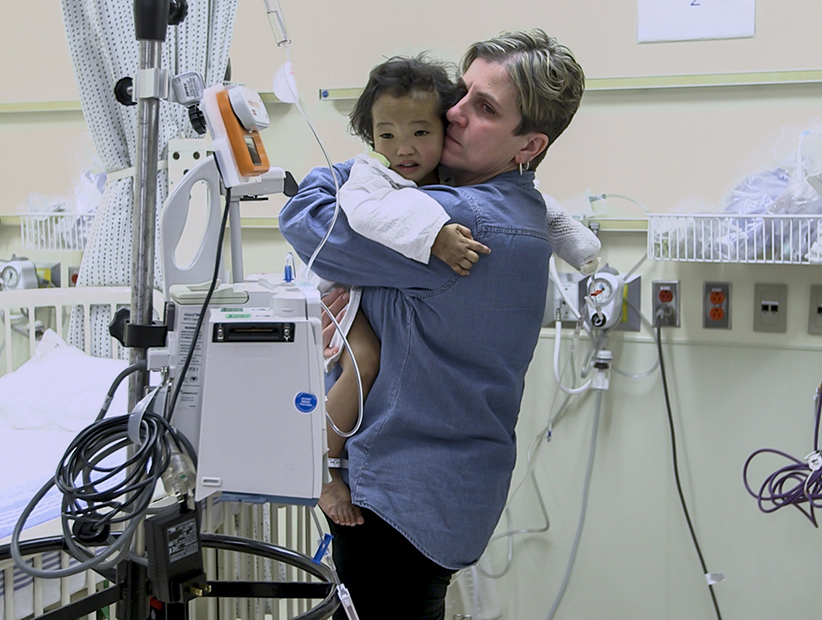 Johanne Wagner holds her three-year-old daughter Phuoc before her liver transplant operation in Toronto on February 10. Michael Wagner gave part of his liver to Phuoc, one of his twin daughters, who also has a genetic disorder called Alagille syndrome. (Courtesy of SickKids & UHN)

Their heartbreaking story captured worldwide attention earlier this year: terminally ill twin sisters desperate for liver transplants, and a Canadian father who could donate his organ to only one. Two months later, the second twin has received her life-saving transplant—thanks to a brave anonymous donor who volunteered to undergo major surgery for a stranger.

Johanne Wagner of Kingston, Ont., the twins’ mother, announced the news this morning in a surprise Facebook post. “BINH RECEIVED HER GIFT!!! There are not enough words to thank the amazing and so unselfish donor,” she wrote. “And in order to respect the anonymity of this wonderful person, please do not ask or try to find out when the transplant took place: this is irrelevant. After all, what really counts here is the gesture and the great result.”

Wagner said her daughter Binh is “recovering well, at her own pace” but is dealing with some “very different medical issues” than her sister, Phuoc, who received a portion of her dad’s liver in February. The family also asked for privacy, pending a news conference scheduled for Tuesday morning. “We are looking forward to all being reunited and leading a healthier life now, with both transplants finally behind us,” she wrote. “More to come, lots of pictures as soon as I get a chance, stay tuned!!!”

The Wagner twins will turn four years old next month.

Orphans who were abandoned at birth by their Vietnamese mother, Binh and Phuoc were later diagnosed with Alagille syndrome, a rare genetic disorder that attacks one in every 70,000 newborns, triggering a build-up of bile in the liver and limiting the organ’s ability to remove waste from the bloodstream. Frail, jaundiced and severely malnourished, the twins were 18 months old when Johanne and her husband, Michael, travelled to Vietnam to adopt them in November 2012. The couple wasn’t sure the girls would survive to see their second birthday.

But the Wagners—who have seven other children: five biological, and two others adopted from Vietnam—vowed to do everything possible for their new daughters. In December, when doctors concluded that both girls required liver transplants, the family turned to social media for help, hoping a Facebook campaign would compel potential donors to come forward. (Because the human liver can regenerate itself, surgeons can remove a portion of the organ from a healthy person and give it to a recipient.)

In the meantime, Michael put himself forward as a candidate—and, when doctors confirmed his liver was a match, the inevitable question triggered headlines around the world: Which daughter would Dad save?

In the end, doctors at Toronto’s Hospital for Sick Children said the choice was obvious: Phuoc, according to every medical test, was in more immediate need of her father’s liver. The transplant occurred on Feb. 10, with Michael under the knife at Toronto General Hospital UHN, and Phuoc across the street at SickKids.

At a post-surgery press conference, Dr. Gary Levy, who oversees Toronto General’s live-liver donor program, said hundreds of strangers were so moved by the Wagners’ story that they volunteered to be the other donor. At some point over the past month, Levy and his team selected the ideal candidate—but exactly when the second round of surgeries occurred will remain confidential.

“The donation surgery was performed at Toronto General Hospital and the transplant surgery took place at SickKids within the past month,” read a joint news release from the hospitals, also released this morning. “To protect the privacy and confidentiality of anonymous donors, as required by Toronto General Hospital’s Living Donor Liver Program, the hospitals will not be releasing the date of the surgeries or any other possible identifying details.”