The men who guard the PM

We don’t know much at all about the people who snuff out threats to Stephen Harper’s safety. The Mounties charged with protecting the Prime Minister are paid to look invisible when they’re on the clock. Recently, however, reports of internal strife started to emerge. Supt. Bruno Saccomani, the man who whipped the Prime Minister’s RCMP detail into shape a few years ago, stands accused of bullying and favouritism. He denies any wrongdoing.

The allegations offer a rare window into the secretive security detail who often go completely unnoticed. That effort to hide in the open caught the attention of Chris Young, a photographer who has captured Prime Minister Stephen Harper on camera since 2009—and who quickly became captivated by the PM’s protectors.

Young told Maclean’s about his fascination with the hard-nosed Mounties, who he photographed extensively while Harper campaigned in the Toronto area during the 2011 federal election. “You had these very large men in the background,” he said. “They tried to fit in with their surroundings”—an impossibility, on occasion. After all, it’s hard to hide in front of a tree. 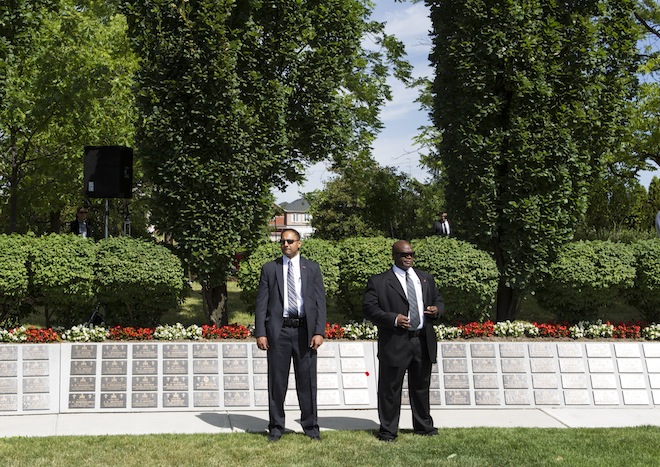 Every move he makes

Eyes in the bushes: There are four plainclothes RCMP for the PM's stop in Brampton, Ont. (Photograph by Chris Young)